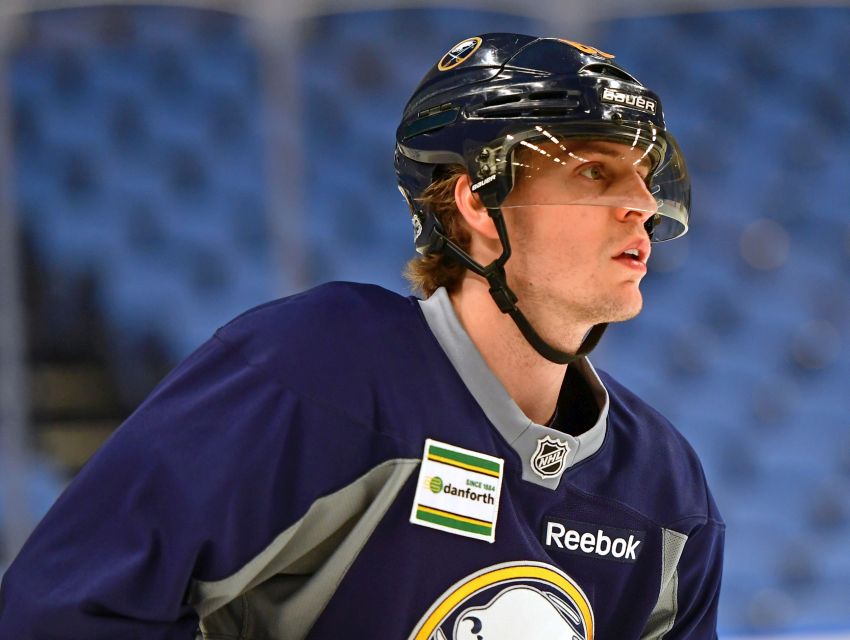 BUFFALO – It’s the surest sign Tyler Ennis has regained some of his slick form after undergoing early-season groin surgery and struggling for months. The speedy Sabres winger has started showcasing his old burst.

Just over halfway into Wednesday’s 2-1 win, a rebound squirted into the slot between two Montreal Canadiens defensemen. Ennis read the play perfectly, zooming in and beating them to the loose puck.

A split-second later, Ennis scored his first goal since Feb. 12, just his fifth this trying season, the winner in the Sabres’ home finale inside KeyBank Center.

Three or four weeks ago, Ennis said an opponent might’ve grabbed that puck.

“I may not have (had) that pop to go get it,” he said following the game. “That’s why we have a good staff that’s helped me along to get back and get the speed back and continue to do that.”

The last two seasons have been arduous for Ennis, the longest-tenured Sabre. In his last 72 games dating back to the start of 2015-16, the former first-round pick has only mustered eight goals and 24 points.

But as Ennis’ eighth NHL season winds down, he said he hasn’t felt so good health-wise since 2014-15, when he scored 20 times and was the Sabres’ top offensive threat.

“Coming off the concussion for a while and having the groin surgery, it’s been tough and frustrating,” Ennis said. “It’s been a long time since I feel like I’ve played healthy hockey and enjoyed making plays and being out there and being quick. Tonight was fun.”

But was it Ennis’ last night with the Sabres in Buffalo?

“I wasn’t thinking about it too much,” he said. “Things happen, there’s changes, especially nowadays in hockey. You can’t expect anything.”

Given his weak production and a hefty $4.6 million cap hit over two more seasons, the Sabres will likely expose him in the upcoming expansion draft.

Still, Ennis could have a future here. Sabres coach Dan Bylsma has tried to help him recently, giving him some time on the first line with center Ryan O’Reilly. Ennis spent a chunk of the late winter skating short minutes on the fourth line.

“I’ve been feeling better and continuing to work to get my body to feel better each day,” Ennis said. “The confidence is coming back.”

“Coming back, it’s one of those surgeries where you’re back and you’re skating and you’re able to play but you’re not all the way,” Bylsma said. “You don’t have your legs underneath you, you don’t have all your capabilities back. …

“That’s just been the difference for Tyler over the last five or six games where he’s been able to have his skating back, have his compete back and you see him being hard and good on pucks.”

“It’s not a fancy goal,” he said. “He’s in the dirty area and he’s battling and finds a goal for us.”

Notes: The Sabres, who close the season with a two-game Florida road trip this weekend, had Thursday off. … The Sabres sent goalie Linus Ullmark, who subbed for backup Anders Nilsson against Montreal, back to the AHL on Thursday.