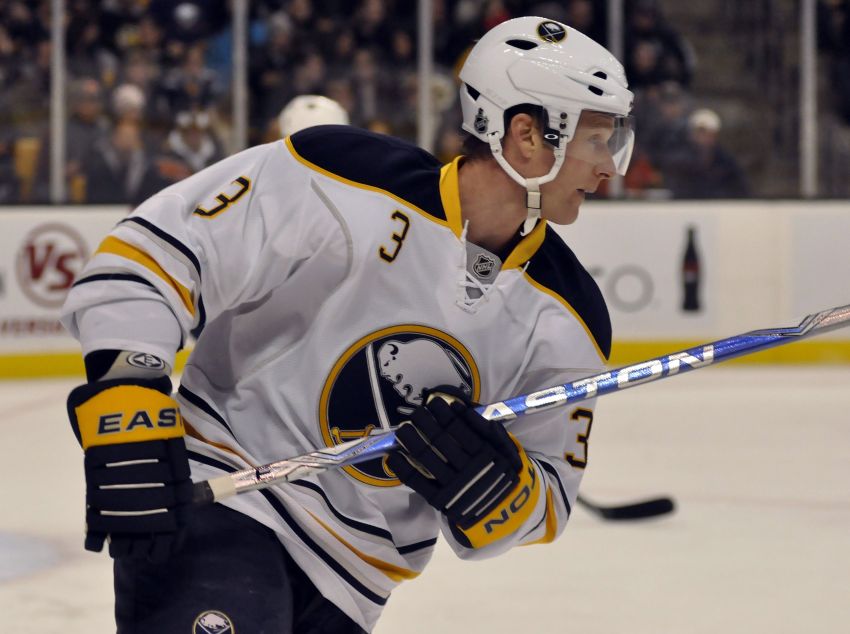 AMHERST – Now they’re officially on their own, locked out and barred from any contact with the organization. About 12 Buffalo Sabres regulars skated with some prospects Monday morning inside the Northtown Center, the first of possibly dozens of practices without a regular coaching staff.

The team employees who had recently assisted with informal skates have left. Other than the Sabres logo on their jerseys, something the players could soon ditch, the symbol has almost vanished.

The cold, dark reality of the three-day work stoppage is beginning to hit the Sabres.

“It is a lot different,” captain Jason Pominville said after skating. “No trainers here to help us out. No workouts at the arena. It’s on our own. We got to figure out ways to keep ourselves ready.”

The Sabres are trying to replicate regular practices by having former teammates serve as unofficial coaches. Andrew Peters and Jay McKee, who skated in full uniform, ran Monday’s session and plan to keep putting their friends through drills McKee designed.

McKee coached in Rochester last season before being let go. Peters, a fighter who often played sparingly over six seasons, has no coaching experience.

But Peters recently called Pominville and asked if he could help. The ex-tough guy remembers structure missing from workouts during the 2004-05 lockout.

“I’m not a coach, but I enjoy doing it,” said Peters, who retired in 2011 and misses the camaraderie. “I still have a good rapport with the guys. … It’s a lot of fun to be able to help out. I’m being serious about it. I know Jay’s being serious about. I want to help contribute to these guys staying in shape during this lockout.

Still, Peters had some fun, unzipping his track jacket afterward and pulling out his whistle so a TV camera would film it.

“I never thought I’d want to coach,” Peters said. “I’d love to coach. I think I wouldn’t be an Xs and Os guys. I think I could be a motivator kind of guy and a fun guy around the locker room. I’m not a coach by any means.”

So far, the Sabres seem to be loose and making the best of a tough situation. While the sides are far apart on splitting revenue – owners want the players’ share down from 57 percent to about 47 – the dispute doesn’t appear as grim as last time, when the entire season was canceled.

“We all have hope. It’s one day at a time,” said defenseman Jordan Leopold, the team’s union representative. “I’ve said this in many interviews. The whole grand scheme of things can change overnight. Somebody makes a phone call and talks progress, and you can hatch out a deal on a piece of paper in about 20 minutes. So who knows?”

Former Sabres forward Jochen Hecht, a free agent hoping to find work when the stoppage ends, is more optimistic than in 2004-05.

“I didn’t even come over to see what’s going to happen (then),” said Hecht, who’s skating with his old teammates. “I just stayed in Germany right away. This time a lot of guys came back. They’re interested. They thought that there’s hope to come together.”

Are the players more informed and united this time around?

“I think that’s an easy question to answer,” Leopold said, “and that is absolutely yes.”

“(We) kind of saw the trend coming,” Leopold said. “We’ve been locked out twice before. Most likely they’ll be a third lockout. It speaks to the CBA that we have. It needs some adjustment. I think the big thing as players (is) we don’t want to be here at the end of the next CBA. We need to break the cycle and break the string.”

Some Sabres aren’t waiting around town, however. As he promised, Christian Ehrhoff is joining his hometown DEL team, the Krefeld Penguins. The insurance had been worked out and the defenseman was en route to Germany on Monday, said Richard Curran, his agent.

Leopold would consider European offers. He spent most of the last lockout recovering from a concussion.

“Guys want to play hockey,” Leopold said. “That’s the big thing. If they have the opportunity … it’s good for them. It shows that we have some options. Our job right now is to stay in shape and be ready when training camp opens, whenever that is.”

Veteran Matt Ellis would strongly consider heading overseas if an opportunity arises. Newcomer Steve Ott doesn’t plan to look for other work unless the dispute stretches to January.

Hecht has an offer to play for his hometown DEL club, the Mannheim Eagles. Right now, he’s still hoping to land an NHL job.