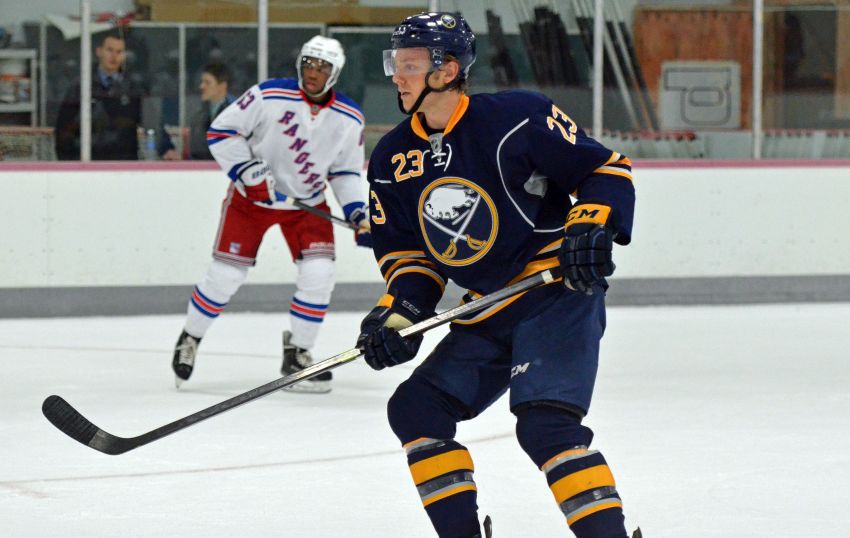 BUFFALO – If you love roster battles, the next three weeks of Sabres training camp should be fun.

About 34 players have a legitimate chance to crack the opening-night lineup. They have a prized prospect, slick center Sam Reinhart, vying for a spot. The starting goalie job is up for grabs. Defense spots are open. Nine or 10 guys will be competing for three fourth-line spots.

Coach Ted Nolan’s first Sabres camp since 1996 should be interesting.

Can Reinhart earn a roster spot?

Reinhart, the No. 2 pick in June, should get a long look during camp. Naturally, the Sabres haven’t said much about the 18-year-old’s future. But Nolan has spoken in the past about his belief very few youngsters can jump right from junior into the NHL.

Whatever happens, you can bet the Sabres won’t force Reinhart onto the roster. If he makes it, he’ll have a role and receive regular minutes.

Remember, even if Reinhart’s on the roster for the Oct. 9 season opener, the Sabres don’t have to keep him. They can play him nine games before the first year of his entry-level contract kicks in.

The March goaltending battle between Jhonas Enroth and Michal Neuvirth never materialized after both suffered season-ending injuries. The common theory has the young veterans splitting time during the preseason and into the regular season until one of them wrestles the job away.

The Sabres played the final six weeks of last season without a captain after trading Steve Ott. Conventional wisdom has Nolan awarding the ‘C’ to newcomer Brian Gionta. Having served four seasons as Montreal’s captain, the 35-year-old, the Sabres’ oldest player, is by far the most qualified candidate.

Gionta might have to wait a few weeks for the captaincy. Many teams looking for a captain rotate it through the preseason.

Who are the six defensemen?

Tyler Myers and Josh Gorges have spots cemented. About eight others will be battling for the other four spots, most notably Rasmus Ristolainen, the No. 8 pick in 2013. The 19-year-old might be ticketed for Rochester early on, however.

Andre Benoit’s arrival a few weeks into free agency could mean the Sabres want Ristolainen to get more AHL seasoning. Even if he gets sent to the minors early, the Finn should see NHL duty at some point in 2014-15.

Who’s on the fourth line?

Patrick Kaleta, banished to Rochester last season before suffering a season-ending ACL injury in November, is the most notable fourth-line candidate.

Kaleta, a fan favorite from Angola, should be one of camp’s most intriguing stories. A year ago, the thought of Kaleta battling for a job was unimaginable. The agitator had been a regular since 2008. Now, he’s playing for his Sabres career.

Nolan and general manager Tim Murray have their work cut out. Other than Johan Larsson, all of the candidates require waivers to be sent to Rochester, meaning the Sabres could lose some talent before the opener.