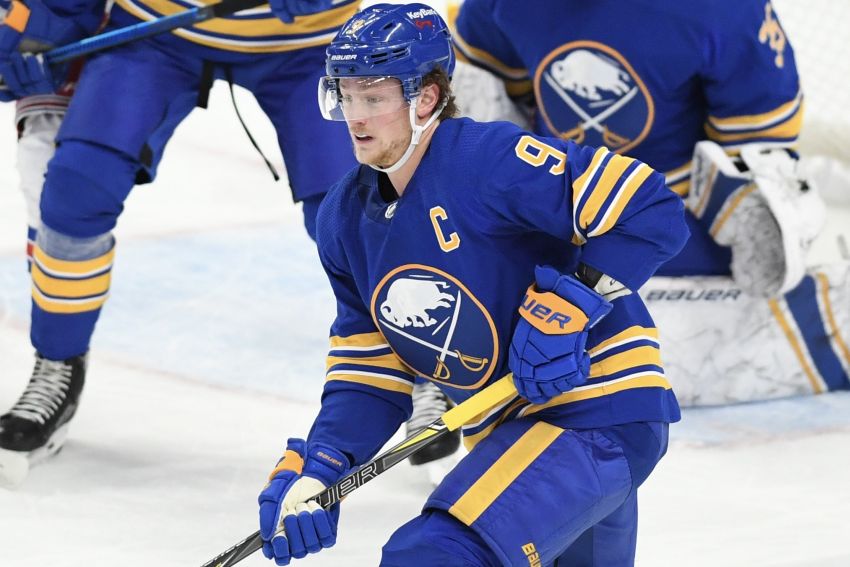 The Jack Eichel saga ended this morning after nearly six months, with the Buffalo Sabres trading their disgruntled former captain to the Vegas Golden Knights in exchange for two players and two picks.

The deal closes one of the oddest chapters in Sabres history. During an end-of-season Zoom call May 10, Eichel, the face of the franchise for more than five years, said he felt a “disconnect” between himself and the Sabres over the herniated disc in his neck.

Eichel, who was non-committal over his future then, wanted to undergo disc replacement surgery, a procedure that has never been performed on an NHL player. Sabres doctors, however, wanted Eichel to have fusion surgery.

The Golden Knights have reportedly signed off on Eichel, the second overall pick in 2015, undergoing an artificial disc replacement.

When the Sabres drafted Eichel, he was supposed to lead them back to glory. Instead, they remained at the bottom of the NHL.

More on the Sabres’ acquisitions:

– Tuch, 25, underwent shoulder surgery in July and is expected to be sidelined six months. The Syracuse native is in the third season of a seven-year, $33.25 million contract.

Tuch, who grew up a Sabres fan, has connections to Buffalo, having worked out in the offseason with Matt Ellis at LECOM Harborcenter. Ellis is now one of the Sabres’ assistant coaches.

Adams said Krebs will be assigned to the Rochester Americans.

The 6-foot, 185-pound Krebs has recorded one assist in 13 NHL games, including nine appearances this season. He has also played two games for Vegas’ AHL affiliate, the Henderson Silver Knights.

Krebs played in the NHL, AHL and Western Hockey League last season. He spent most of the season in junior, registering 13 goals and 43 points in 24 games with the Winnipeg Ice.

Update: The Sabres this afternoon acquired retired defenseman Johnny Boychuk, who suffered a career-ending left eye injury last year, in exchange for future considerations.  His $6 million contract will help the Sabres stay above the cap floor.

Update: Sabres coach Don Granato said on a Zoom call this afternoon leading scorer Victor Olofsson, who has been battling a soft tissue injury, will miss tonight’s road game against the Seattle Kraken. He expects Olofsson to play Saturday against the Detroit Red Wings.

In other news, Granato said goalie Dustin Tokarski will face the Kraken.

One thought on “Sabres trade Jack Eichel to Golden Knights for players, picks”