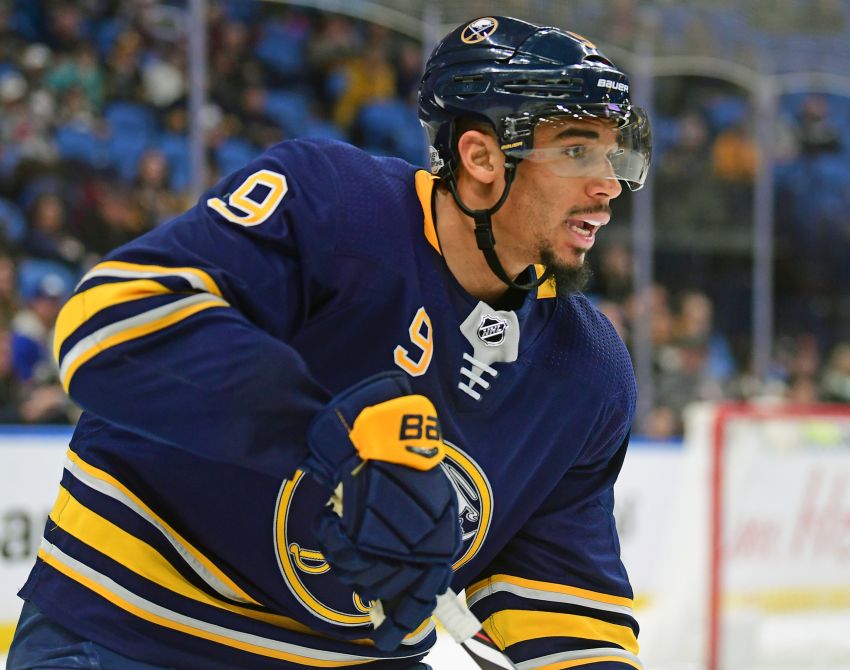 BUFFALO – The Sabres this afternoon traded winger Evander Kane to the San Jose Sharks, according to multiple reports.

The Sharks sent the Sabres a conditional first-round pick, a conditional fourth-rounder and center prospect Danny O’Regan, according to Sportsnet’s Elliotte Friedman.

Update: the first-rounder is a 2019 pick, according to TSN.

Second Update: the first-rounder is conditional on Kane re-signing with the Sharks, according to TSN. If he leaves, the pick becomes a 2019 second-rounder.

Kane, 26, will be an unrestricted free agent following the season.

Teams have been reluctant to deal first-round picks in recent years, but three have been dealt today. The Nashville Predators dished one to the Chicago Blackhawks in the Ryan Hartman deal. The Winnipeg Jets also sent their first-rounder to the St. Louis Blues in the Paul Stastny trade.

This season, Kane roared out the gate, scoring 12 goals in the first 21 games. But he began slumping in mid-November and only recently broke out of his long funk, scoring four times in his last seven appearances to hit the 20-goal mark. The Sabres scratched him the last two games to protect their asset from injury.

Kane has never played in playoffs nine seasons and 557 games into his career. Right now, the Sharks have a postseason spot.

Off-ice incidents marred Kane’s early days in Buffalo. In 2015-16, the Sabres benched him after he partied in Toronto and overslept practice. Kane was arrested in June 2016 following an incident at a local bar as the Sabres hosted the NHL Draft. Trespassing and harassment charges were later dropped.

But Kane stayed out of trouble and began morphing into a lethal goal scorer. From Dec. 3, 2016, the date he scored his first goal last season, until Nov. 20, 2017, he ranked fifth in NHL goal scoring, compiling 39 in 78 games.

Meanwhile, the 5-foot-10, 176-pound O’Regan played 19 contests with the Sharks this season.

The American acclimated to pro hockey quickly as a rookie a year ago, scoring 23 goals and 58 points in 63 games with the San Jose Barracuda. He had seven goals and 25 points in 31 AHL games this season.

Update: The Sabres today sent winger Nick Baptiste and defenseman Casey Nelson to the Rochester Americans in what were likely paper transactions to make them eligible for the AHL playoffs. They will likely be “recalled” soon.