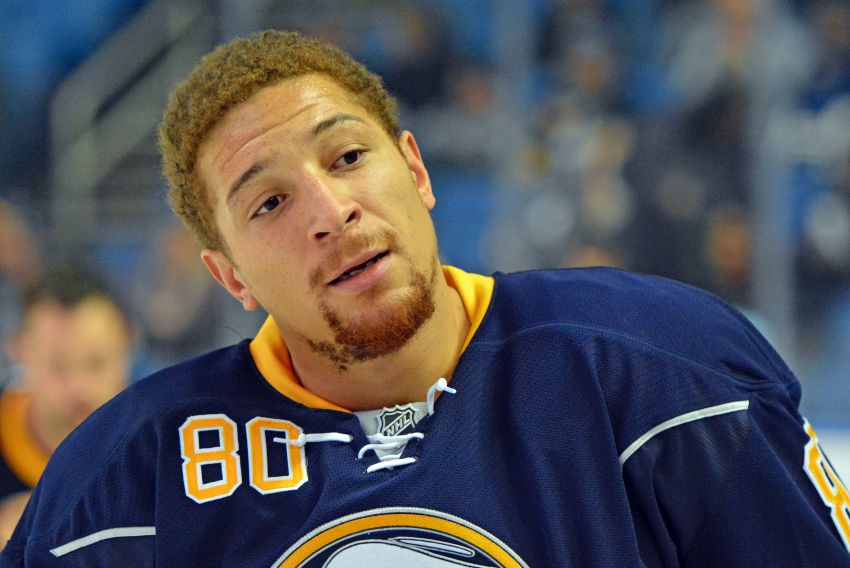 In return, the Sabres received, well, nothing very notable or of immediate help. Only one NHL player, backup goalie Chad Johnson, came back. They also added four draft picks – a second, third, fifth and seventh – and an AHL fighter.

Of course, Monday strengthened the Sabres’ hold on 30th place. The moves were possibly enough to secure a last-place finish, meaning they will be able to draft either Connor McDavid or Jack Eichel, two 17-year-old superstars.

The talk about the Sabres tanking this season – something general manager Tim Murray flatly denied is doing – will only increase now.

“That’s how we made the team better,” he said.

But how bad is the current roster? The healthy players left have combined for 61 goals the entire season. The goalies – the Sabres have had nine since Murray took over less than 14 months ago – have 10 combined wins. Both Johnson and Anders Lindback have wretched save percentages below .890.

Of the four players traded, only Flynn, who’s a restricted free agent, won’t be unrestricted following the season.

“Was it a good day?” Murray asked. “It’s never a good day to give good people away. I talked to them all. They all understand and are somewhat happy with their situations.”

“We’re in 30th place,” he said. “We’ve got guys here who are going away at the end of the year. So you can let them finish the year here and walk away for nothing. Or you can add something. And that’s been the history of sports. … When you are at the bottom, you trade out guys who can help other teams for future assets.”

– Shortly before the deadline, Stewart, their biggest chip, went to the Minnesota Wild for a 2017 second-round pick. The Sabres are keeping half of his salary, according to reports.

– Neuvirth went to the New York Islanders for Johnson and a 2016 third-round pick. Neuvirth has been strong all season, especially since he became the No. 1 last month, posting a .942 save percentage in eight starts.

– Mitchell went to the Montreal Canadiens for a 2016 seventh-round pick and 21-year-old forward Jack Nevins, an AHL tough guy. The Sabres are keeping half of Mitchell’s salary, according to a French-Canadian report. Mitchell is from Montreal.

– In the morning, Flynn went to the Canadiens for a 2016 fifth-round pick.

Nineteen games are left this season. The Sabres have won only 19 times all season. They were on pace to be the lowest-scoring team in the modern era before the trades.

What’s going to happen during the final six weeks?

“I assume the players that we have here will try to win every game,” Murray said. “I assume the coaching staff will try to win every game. They’ve never had any interference from me, from Day One. The players have never been told by me to not win. There’s never been any talk about that. The only talk I get about that is from the press. We just don’t talk about that.”

If the Sabres didn’t care about winning, Murray said, why did they keep starting Neuvirth when Lindback, perhaps the league’s worst goalie, was available?

“If everybody in here … thinks that Neuvirth is a much better goalie than Lindback, then we were trying to lose every game, we probably should’ve been trying to play Lindback,” he said. “But that’s not what we’re doing.”

Trading Neuvirth could bite the Sabres. While they have some good goalie prospects, none of them are NHL-ready. It’s unlikely Johnson, a decent backup with a year left on his contract, or Lindback will become their goalie of the future. Murray said he doesn’t know if he’s comfortable with either.

But Murray believes he had to trade the 26-year-old Neuvirth to get some sort of return.

“I wish … free agency was 31 years old again,” Murray said. “Unfortunately, it’s not. He’s played great since he became the starter here. Did that make people or teams hotter to get him or did that put him on the radar? I don’t know that.”

Murray plans to keep looking for that goalie.

“There are some potential free agents,” he said. “I think there are a couple potential trades in the summertime. I talked to a couple teams about young backups (or) co-starters in this league this year that may become available in the summertime. It wasn’t the right time or we couldn’t come up with the right assets to make those deals today. But I know from my talks we have a broad plan.”