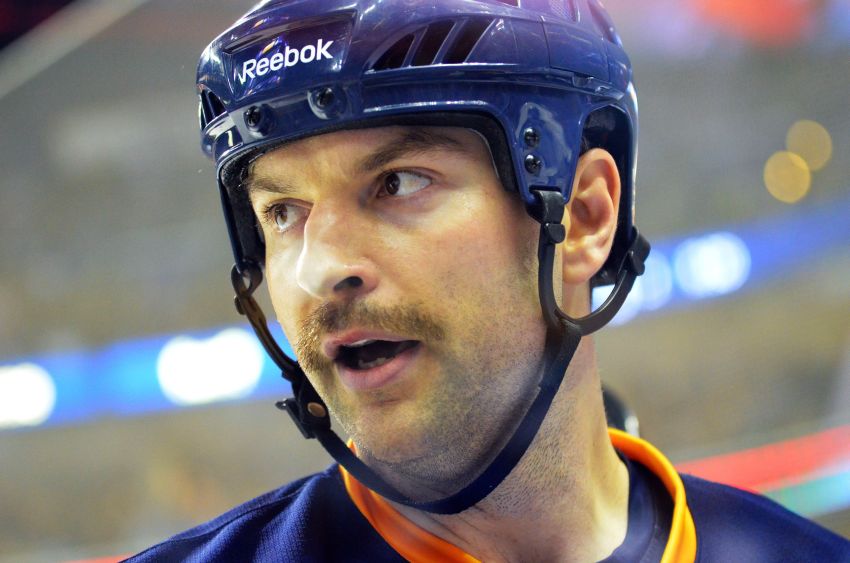 BUFFALO – The “meathead” hockey player, someone John Scott describes as a goon who plays three minutes, fights and calls it a day, well, the 6-foot-8 winger doesn’t care for him too much.

“I don’t want to do that,” Scott said Monday after the Sabres prepared for tonight’s tilt against the St. Louis Blues inside the First Niagara Center. “I want to help my team. I don’t think just going out there playing two minutes is doing anything. I don’t think it’s really intimidating. I think it serves no purpose.”

“I told John I don’t want to see him doing it,” Nolan said. “I want to see what kind of player he can be. You have to be able to play this game in order to stay here. So I want to see him play. Fighting will always take care of itself.”

Through two games, Nolan, who took over for Ron Rolston on Wednesday, has consistently given Scott shifts on the fourth line beside Cody McCormick and Corey Tropp.

“If you haven’t got a fourth line that can get out there to give you some minutes, you’re going to wear it out real quick,” Nolan said. “I’m really happy with Cody and Tropp and Scott. I thought they did a great job. Our fourth line is as good as any in the league.”

Scott added: “He has a little more confidence in the fourth line, and he just didn’t see us as like a burden. It seems like with Ron, he didn’t trust us that much. And Ted, he likes the way we play. He wants us to be physical, play the way we’re supposed to play.”

Scott said Nolan, a fierce competitor in his playing days, “seems like he’s cut from the same cloth a little bit.”

“He’s a tough guy. I respect him,” said Scott, who played a season-high 7:31 on Friday, Nolan’s debut. “He respects guys that play the game like me and Cody and Corey. … It’s nice to have a guy you can kind of look up to and respect.”

If Scott, who has one NHL goal in 189 NHL games, seizes this chance and showcases his talents, then perhaps the 31-year-old will start changing some opinions about his game.

“I’d like to be out, play six, seven, eight minutes a game, maybe 10, you never know, just make the other team worry about me, hit guys, like, be a force out there,” Scott said.

Critics of enforcers and fighting have been flaying Scott all season, telling him to leave the league.

“It just seems like every few weeks there’s something else going on,” Scott said. “But, whatever. It’s one of those things that’s never really happened to me. It’s just my team, I like them. My fans here in Buffalo seem to like it. So that’s all that matters.”

On Saturday, his second appearance since his seven-game suspension ended, Scott received 14 penalty minutes for doing nothing notable in a mini-melee.

Following the game, he called Toronto captain Dion Phaneuf, who had fallen down with the puck as Scott approached him, “Princess Phaneuf,” a comment he said Monday that he regrets.

“He’s a fun guy, not afraid to say what’s on his mind,” Sabres goalie Ryan Miller said. “You get things like, ‘Princess Phaneuf’ and stuff coming out of his mouth. He just wants to be respected as a hockey player.”

Scott said he doesn’t care what people think of him.

“I know who I am,” he said. “I know how I play. I think the guys on my team know and the people in the league know I’m a decent hockey player. I’m not just going out there being a goon. I can play a regular shift.

“If people want to think I’m a goon, then (heck), it’s perfect. I can just go out there, fly under the radar and surprise them.”

Miller, who sits next to Scott in the dressing room, said it’s up to Scott “to bring it” now.

“He’s got to play minutes where he’s a responsible player,” Miller said. “He’s got to get to the net, and he’s got to get that body to the net. I’d like to see him get some points, contribute, for sure. He’s capable of it. He doesn’t have hands of stone. He can shoot the puck. He can get there and tip and shovel pucks.

“He just needs to get his body in front, and I think that’s the next thing you want to see out of John is making some plays and just getting in front and causing some havoc.”