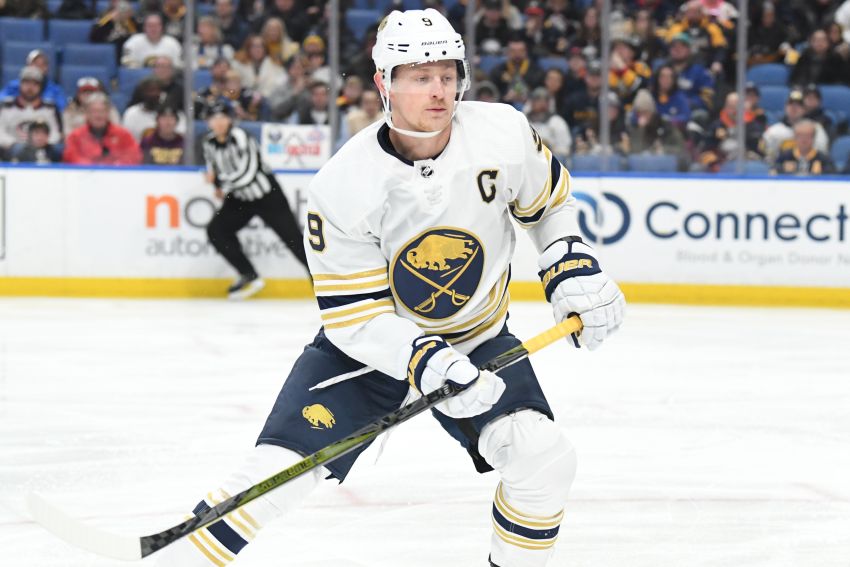 PITTSBURGH – The response was perhaps the Buffalo Sabres’ most emphatic all year.

Four days after suffering a brutal loss, the Sabres throttled the Penguins early in Saturday afternoon’s 5-2 victory, scoring 14 seconds into the game and opening up a 3-0 lead by the 10:55 mark.

When the Penguins scored about halfway through the game, the Sabres barely flinched.

“After the (3-1) goal there was a short little moment of wavering but we quickly got back to our game, and that was probably the critical moment of the game, that we shut them down … and just got back to what we needed to do without the puck,” Sabres coach Ralph Krueger inside PPG Paints Arena.

Early on, the game mirrored Tuesday’s ugly 7-4 road loss, a game in which the Sabres imploded and allowed four goals in less than four minutes after going up 2-0.

That setback to the Ottawa Senators felt like a season-killer. The Sabres blew a splendid chance to inch closer to the Atlantic Division’s final playoff spot.

But the Sabres roared back Saturday. In a city they traditionally struggle in – before beating the Penguins here last season, they hadn’t won in Pittsburgh since 2013 – the Sabres enjoyed one of their best all-around efforts all year.

“Tuesday’s long gone,” Krueger said. “We really just came in here, regrouped and tried to get back to what we were doing in the games before. I’m just really pleased with the four-line, six-D, goaltending effort all the way through the lineup. Everybody contributed today.

“Yeah, it’s an excellent reaction in a very tough building to react in.”

Sabres captain Jack Eichel said: “I just thought we played really desperate and we got rewarded. That’s a really good team. It’s a good way to play there. We smothered them, we back pressured. We played a good team game on the road.”

It can be tough because the Penguins possess so many elite talents. But superstar Sidney Crosby blended in most of the afternoon, getting outplayed by Eichel, who scored two power-play goals.

“When we come in this building we understand what we’re up against and the way we need to play.” Eichel said. “I don’t think we deviate from that and I think that’s what makes us successful. It’s important that you come in with that mindset no matter who you’re playing or where you are. It seems like when we go on the road and play against some of these top teams in the league we really respect the opponent and we respect our game.

When Crosby generated a prime chance on the power play late in the first period, Sabres goalie Carter Hutton stymied him, one of 41 saves he made.

“It’s just a matter of just battling no matter who I’m playing against over my career,” Hutton said. “I don’t think there’s one certain team that I do good or bad against.”

The Sabres held Crosby pointless for only the fifth time in 41 career games. Hutton, meanwhile, improved to 5-0-0 in seven outings at PPG Paints Arena.

“We were trading chances through the first two periods, it was about even chances,” Krueger said. “So, of course, a big compliment goes out to Carter Hutton. We’re up 3-1 instead of down. … Carter made some critical saves at the right moment.”

Contributions up and down the lineup buoyed the Sabres before the standing-room crowd 18,620.

Eichel scored both of his goals from the left circle, unleashing lethal wrist shots. After Penguins superstar Evgeni Malkin scored the first of his two goals, Sabres winger Jeff Skinner scored 5:22 into the third period, ending a 22-game drought. He hadn’t scored since Dec. 2.

The Sabres also showcased a physical response against the Penguins, something they’ll need while they play their next five games against Western Conference opponents.

After this afternoon’s home contest against the Winnipeg Jets, the Sabres start a four-game road trip.

“We’ve been tested, and we’ve got a lot of road hockey coming up here,” Krueger said. “And we enjoy playing on the road and we’re not afraid of it, but we weren’t getting the results we should’ve earlier in the season. …

“We definitely need to be ready to play physical, and we know teams will be coming at us. So the reaction today was excellent. We can be physical and push back as a team. We will definitely take that with us.”