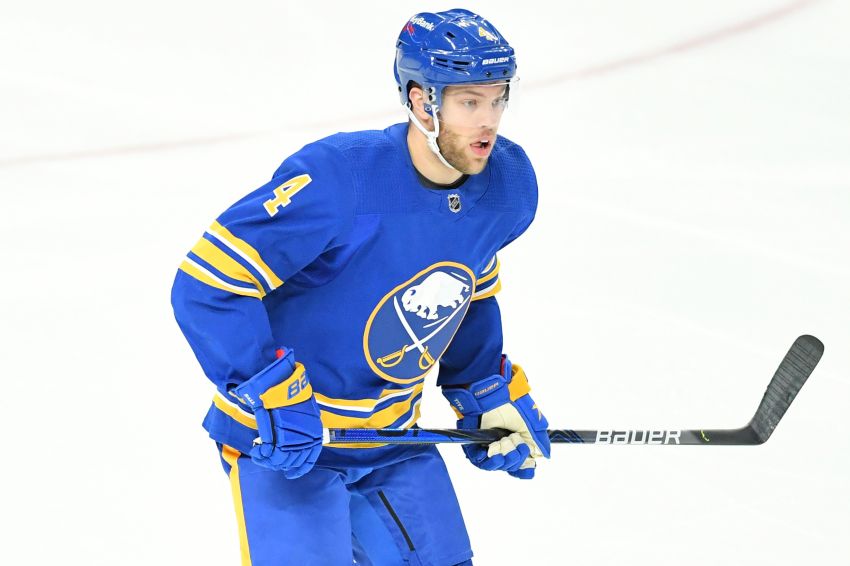 The ultra-talented winger has recorded just one goal, a power-play score way back on opening night, and was moved to the second line Thursday. He has mustered just one assist in the last five games.

Of course, two weeks is a small sample size. Hall has registered seven points, so he has produced offense at a rate close to his career average entering the season (0.88 points per game this month versus 0.90).

Still, when Hall signed a one-year, $8 million contract on Oct. 11, the expectation was he and Jack Eichel would morph into one of the NHL’s best center-wing duos.

Now, Hall, 29, will likely skate at left wing beside center Eric Staal and rookie Dylan Cozens during this afternoon’s home game against the New Jersey Devils.

Hall, the 2017-18 Hart Trophy winner with New Jersey, hasn’t faced his old team since he was traded to the Arizona Coyotes last season.

Coach Ralph Krueger shifted Hall beside Staal during Thursday’s 3-2 overtime loss to the New York Rangers, a game in which the Sabres looked listless. Krueger also moved winger Victor Olofsson up with Eichel. He kept the lines intact for Friday’s practice.

“We knew from the start here the lines would shuffle here and there depending on what the game asked for,” Krueger said on Zoom call following Friday’s practice at KeyBank Center. “The possibility of Jack and Taylor together or them apart is a different challenge for the opposition. Whether at home or on the road, we will be playing with that, so you have to also expect that flexibility and the mobility.”

Not surprisingly, an opportunity to skate with the 6-foot-4, 195-pound Staal excites Hall. When Hall chose the Sabres, he knew he could play on a line beside him.

Staal, 36, has enjoyed a terrific 17-year career, winning the Stanley Cup in 2006 and scoring 438 goals. To Hall, Staal hasn’t shown any signs of graying.

“He’s still got it,” Hall said. “He’s big, he’s lanky, he can move well out there and just a veteran guy that knows where to be. … Whether I’m playing with Jack or Eric, that was my thought coming into this year. There are two really good centermen to play with here and that can create matchup problems.”

Despite a shortened training camp that featured no exhibition games, Hall said adjusting to the Sabres hasn’t been a difficult experience. He wanted to join them, in part, because he played under Krueger with the Edmonton Oilers.

“Teams always want to play with speed,” he said. “They want to play a puck-possession game. They want to play in your face defensively. I think more than anything it’s been adjusting to different linemates or the overall atmosphere that we have here.

“I think it’s been good. I thought my first six games for me personally were really solid. The last two have slipped a little bit, but I feel comfortable enough that I can get to my game and help our team as much as I can.”

While Hall hasn’t scored an even-strength goal – he has three assists – he has generated offense. His Corsi For – the percentage of shot attempts by his team while he’s on the ice at even strength – is 57.9%, according to hockey-reference.com. That number ranks third among regular Sabres behind Eichel and winger Sam Reinhart.

Krueger said Hall has brought confidence and an “aura” with him.

“When he explodes here, he’s going to be extremely lethal for us,” Krueger said. “He’s still, like all our new players … processing some of the principles and driving to make them habits. We all kind of left the page at times yesterday.

“But he’s working on it and I’m sure we’ll have him playing his A game consistently here very soon, just because of the pro that he is.”

Hall enjoyed his best days as a pro with the Devils for three and a half seasons. A dynamic 39-goal, 93-point campaign earned him the MVP award three years ago.

But injuries stymied Hall over the next two seasons, and with his contract expiring, the Devils traded him to the Coyotes on Dec. 16, 2019.

The Devils have undergone a major overhaul since that deal, hiring a new general manager, Tom Fitzgerald, and bringing in former Sabres coach Lindy Ruff, who coached his 1,500th NHL game Thursday.

“Unfortunately, my last two seasons weren’t the way that I wanted to be. I had a really good start to ’18-19 and got hurt, and then last year I was just coming back from an injury and I get traded 25 games in. A little bit of a tumultuous ending, but overall, I have great thoughts about New Jersey and my time there.”