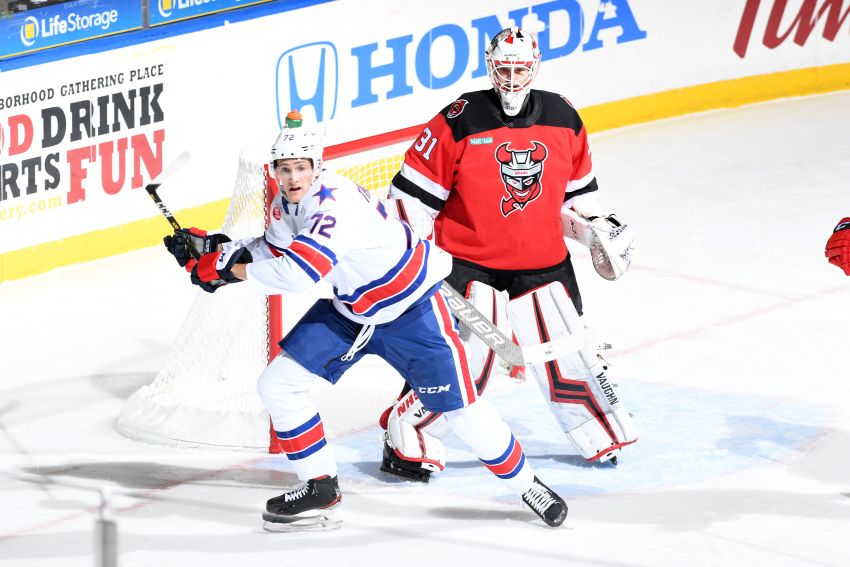 The Sabres announced this afternoon Thompson, 22, has undergone successful surgery on his right shoulder and will be sidelined five to six months.

The 6-foot-7, 215-pound Thompson, one of the Sabres’ top forward prospects, was injured in the waning minutes of his season debut Nov. 17, a 4-1 road loss to the Chicago Blackhawks.

Following further evaluation, team doctors decided surgery was appropriate next step for Thompson, according to the Sabres.

Thompson enjoyed a stellar start with the Rochester Americans this season, scoring six goals and 12 points in 16 games.

The UConn product spent most of last season with the Sabres, compiling seven goals and 12 points in 65 contests. After they assigned him to the Amerks in late March, he went on a tear, scoring eight goals and 11 points in 11 games, playoffs included.

Listen to my podcast here with @pecamichael27 on celebrating the #Sabres50, the label “Captain Crunch,” his golf game, the Bills in the playoffs, the Sabres’ outlook and more: https://t.co/aGi0Y037qM. Thanks to @ALEnANGUSPUB. @BillHoppeNHL @spittinchiclets