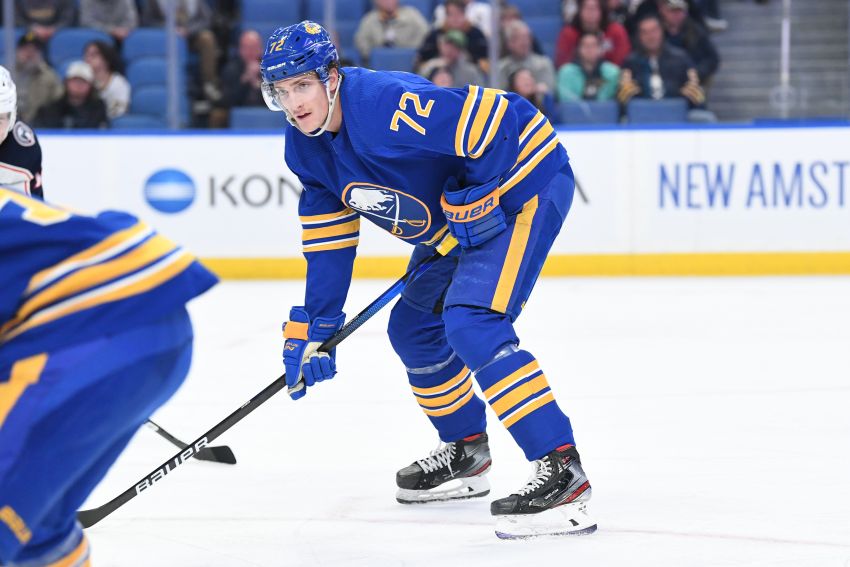 BUFFALO – At times over three tumultuous seasons, it felt like Tage Thompson would never reach this point, at least with the Sabres.

Right now, Thompson, 24, is their No. 1 center and leading goal scorer and point producer. After scoring twice in Monday’s 7-4 loss to the Columbus Blue Jackets, he has already recorded eight goals and 13 points in 18 games, equaling last season’s career-high goal total in 20 fewer outings.

The 6-foot-7 Thompson, the biggest asset the Sabres have from the Ryan O’Reilly trade in 2018, has scored at a healthy 36-goal pace through nearly one quarter of the season.

Thompson opened the scoring 3:38 into Monday’s game, converting a nifty pass from linemate Victor Olofsson in front. Then Thompson’s lethal one-timer from the left circle on the power play – the MSG broadcast said it hit 100 mph – moved the Sabres within 5-4 9:55 into the second period.

“Tage has reached a spot where he’s exciting to watch and he can keep you on the edge of your seat because he’s capable right now,” Sabres coach Don Granato said following the loss before 7,978 fans inside KeyBank Center. “But as far as the potential, I don’t think we’re seeing anything close to what he’s going to become. We just need to keep getting him in situations, his confidence will grow and grow.”

That confidence was probably non-existent for a long time.

The Sabres forced Thompson into the lineup three years ago when he should’ve probably been playing in the minors. After a dominant stint with the Rochester Americans, he suffered a season-ending shoulder injury in his only NHL appearance in 2019-20. Before Granato took over last season, he was sometimes a healthy scratch.

These days, Thompson, who was switched to center this season, said the confidence he feels comes from the opportunity Granato has awarded him.

“You get put in situations, the ice time I’ve been getting, obviously, it shows that Donny trusts me and he sees potential in me,” said Thompson, who also scored in Sunday’s 5-4 road loss to the New York Rangers. “I feel like I’ve put the work in for the last few years, obviously, a lot longer than that, but feeling it starting to come together and getting a little taste of that reward and then you start to get more confident and I think it just kind of grows from there and snowballs.”

Learning to utilize his massive frame has helped Thompson, who can showcase the qualities of top power forwards.

The Blue Jackets exploited some weak goaltending Monday, chasing Dustin Tokarski after he allowed two goals in the first 55 seconds of the second period. Tokarski, who stopped just eight of 12 shots, was also yanked from Thursday’s 5-0 loss to the Calgary Flames.

That short meltdown doomed the Sabres, who trailed 5-2.

“The first was a great period, second half of the second, and I think, honestly, the third was pretty good for us too,” Thompson said. “But consistency, we’ve got to do it for a full 60. Good teams are going to make you pay when you take shifts off.

“I think it wasn’t so much taking shifts off in terms of work ethic. It was more so just getting a little too cute.”

But the Sabres raced back, making it interesting before the Blue Jackets scored two empty-net goals.

“We fought and scratched and clawed,” Granato said. “It was great to see that effort, especially in a back-to-back. You’re playing a team that’s rested. I thought in the second period there were moments where we showed some fatigue signs and a little bit of lapse, but when they were pushed and it was brought to their attention, the guys fought through it hard. We gave ourselves a chance to come back.”

Center Zemgus Girgensons also scored for the Sabres, his first power-play goal since 2015-16. Center Dylan Cozens registered the other goal.

Jack Roslovic and Vladislav Gavrikov, both of whom had zero goals in 15 games entering the night, each scored twice for the Blue Jackets.