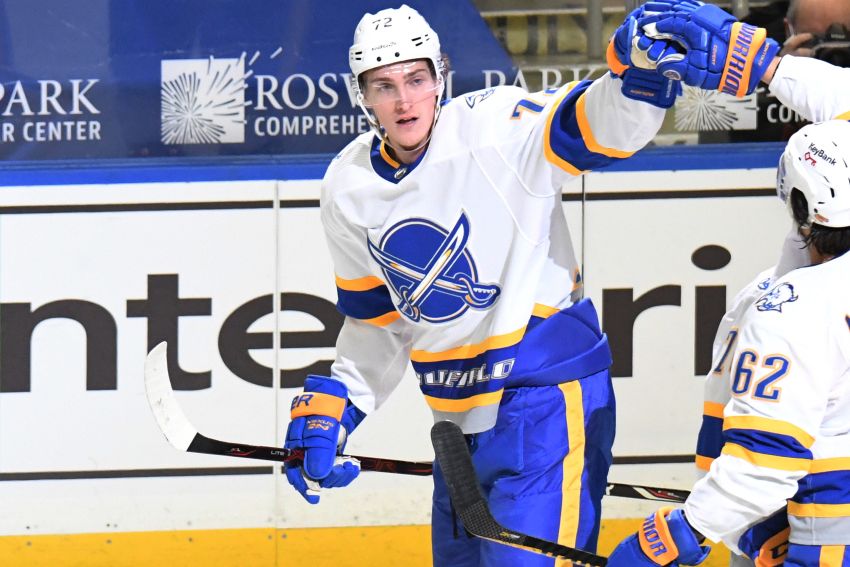 Tage Thompson has often been a healthy scratch this season. ©2021, Micheline Veluvolu

BUFFALO – After morphing from a first-liner into a healthy scratch earlier this season, Tage Thompson could enjoy regular duty under interim coach Don Granato.

Thompson needs consistent action to buoy his development. The 6-foot-7, 219-pound winger has played only 17 NHL games in a more than two-year stretch.

Monday’s 4-3 overtime loss to Philadelphia Flyers at KeyBank Center was the Sabres’ 18th straight defeat. They have nothing to lose by playing him.

“It’s a huge opportunity now not only for me but for our team,” Thompson said on a Zoom call of the opportunities he and the Sabres could enjoy over the final five weeks.

Thompson returned Monday after missing three straight games battling an illness. He said he did not have COVID-19.

Thompson knows Granato well, having played for him in USA Hockey’s National Team Development Program as a 17-year-old in 2014-15.

“Anytime you know somebody previously and you have that already established relationship, you know what their expectations are of you,” Thompson said. “It just makes the game easier, you don’t have to really think too much out there, you just have to go out and play.”

Thompson, a key piece in the Ryan O’Reilly trade with the St. Louis Blues in 2018, has experienced an odd three-year run with the Sabres.

Instead of sending Thompson to the minors in 2018-19, the Sabres kept him up nearly all season, playing him 65 times. In reality, letting him develop into a dominant AHL player with the Rochester Americans likely would’ve been a better option.

The Sabres sent Thompson to the minors late in March 2019. He stood out with Rochester that season and early the next one, scoring 14 goals and 23 points in 27 total games.

But when he earned a promotion to the Sabres early last season, he suffered a season-ending right shoulder injury in his first game Nov. 19, 2019.

Thompson, however, bounced back, looking so impressive in training camp he earned a spot beside top center Jack Eichel for opening night. But Thompson did not last on the No. 1 line and started getting scratched less than a week later.

At one point, he sat out seven straight games and 10 of 11. When he finally returned March 11, he scored his first goal.

Thompson played six consecutive contests before getting sick. At times, he used his size and speed to create offense.

Other times, he struggled defensively. Thompson’s Corsi For – the percentage of shot attempts by the team while a player is on the ice five-on-five – was a ghastly 18.8% in a 4-1 loss to the Boston Bruins on March 18, according to NaturalStatTrick.com.

“When I’m moving my feet … I’m in on the forecheck, being physical, getting pucks back,” said Thompson, who signed a three-year, $4.2 million contract Oct. 6. “Then once I have the puck, protecting it down low behind the net and taking pucks to the net and getting to the net for rebounds and tips. …

“When I do that, it gets me into the game, and then from there I start feeling it and plays start opening up from there.”

Granato said Thompson sees the game from an “offensive standpoint” and must learn to utilize “discretion.”

“At the next level, this being the NHL, the other team can hold you accountable for indiscretion quicker and faster and force you into bad areas faster,” Granato said. “So for him … it’s acclimating and getting enough time to try the things he needs to try to feel engaged for the opposition.

Notes: The Sabres sent forwards Jean-Sebastien Dea and Steven Fogarty back to the taxi squad before the game. … With defenseman Jacob Bryson sidelined by an undisclosed injury, Matt Irwin returned following a two-game absence. … Winger Kyle Okposo, who assisted on defenseman Henri Jokiharju’s goal, has compiled two goals and four points in the last four games.