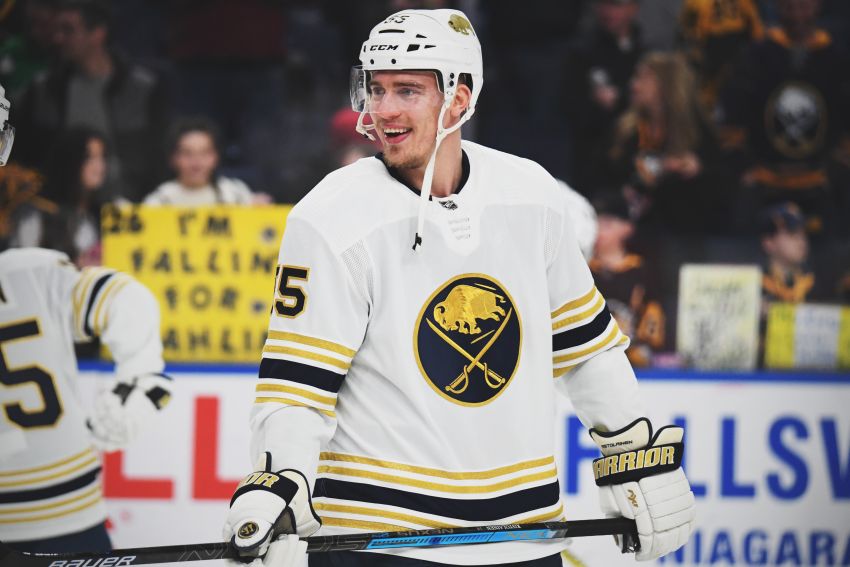 “We’re continuing to try to set this team up where we’re putting (Rasmus Ristolainen) in positions to have success.”

As their nine-year run of futility indicates, the Sabres rarely accomplish what they set out to do. The once-proud franchise has become a laughingstock.

Still, in the case of defenseman Rasmus Ristolainen, the Sabres deserve credit for helping him develop a smarter, sturdier style as new coach Ralph Krueger installed more structure this season. They succeeded in settling the Finn down, lightening his load and unlocking more of his potential.

Now, instead of being overwhelmed and run ragged trying to defend the opposition’s best, the 6-foot-4, 215-pound Ristolainen, 25, is just one piece of an ensemble blue line.

Being cast in a less demanding role – the Sabres have added defensemen Rasmus Dahlin, Henri Jokiharju and Brandon Montour in the last two years – helped Ristolainen improve his rating from a ghastly, league-worst minus-41 a year ago to a minus-2 this season.

Since Ristolainen entered the NHL in 2013-14, he has compiled an ugly minus-145 rating, the worst of any player over that stretch.

“I feel he was trying to drink water from a fire hose for the first part of his career,” said a scout who has watched Ristolainen regularly throughout his seven-year career.

Yes, Ristolainen still averaged a team-high 22 minutes, 48 seconds of ice time in 69 games before the COVID-19 pandemic forced the NHL to suspend its season indefinitely March 12. That number, however, is down 1:50 from last season and a whopping 3:42 from two years ago.

“Ristolainen, to me, has more support on the back end with better players to help share some of the lifting,” the scout said. “Since he came into the league at a very young age, he was asked to do a lot of the heavy lifting on some poor teams. (It’s) hard on one’s plus-minus and confidence.

“A lot of NHL defensemen will say it takes close to 300 games played to feel totally comfortable playing that position in NHL.”

NHL Network analyst Kevin Weeks said: “Montour, Jokiharju and Dahlin’s progression this year, all those things have taken some of the burden, spotlight off of him, where Risto doesn’t necessarily have to force playing 27 minutes.”

Ristolainen, who has played 493 NHL games, never seemed to enjoy much comfort until Krueger, his fifth coach in seven years, arrived in town. By last season, Ristolainen felt so frustrated he appeared to want to be traded.

But after playing just a few weeks under Krueger, he seemed rejuvenated.

“I like whatever he does,” Ristolainen told the Times Herald on Oct. 31, when the Sabres had a stellar 9-2-2 record. “I like how he communicates with us. I like the way he talks. He talks really powerfully and everyone listens. He’s kind of the leader, everyone follows him. He brought a lot of confidence to us.

TSN analyst Craig Button said the ultra-positive Krueger identifies his players’ strengths and encourages them to display their talents.

“Coaches sometimes dwell on the negatives too much, and I think Ralph came in and he recognized what Rasmus is,” said Button, who spent three years as the Calgary Flames’ general manager in the early 2000s. “Rasmus is a talented player, he can beat you a lot of ways. But you also have to have an understanding from your coach, ‘Hey, you know what? … Here’s the things that we don’t want to see you make your mistakes on, clean those up and then go play your game. Go and do those things.’”

Having developed a new mindset, Ristolainen began utilizing his instincts instead of overthinking.

“I think that Ralph really created an environment for Rasmus and others to take their play to another level,” Button said.

Weekes said: “One thing I see in his game (is) a little more balance – balance between being physical but not running, balance between making plays but not forcing them and then balancing between defending.”

Ristolainen’s offense did not suffer much in Krueger’s system. He has compiled six goals and 33 points this season. While Ristolainen will likely fall short of recording his fifth consecutive 40-point campaign, he still averaged .48 points-per game, down from .54 over the previous four years.

“He’s having a real solid year, and I think part of that is the balance,” said Weekes, a former NHL goalie. “I think that the team overall has had a little bit more structure, and they’re not as wide open, they’re fully not as sloppy defensively.”