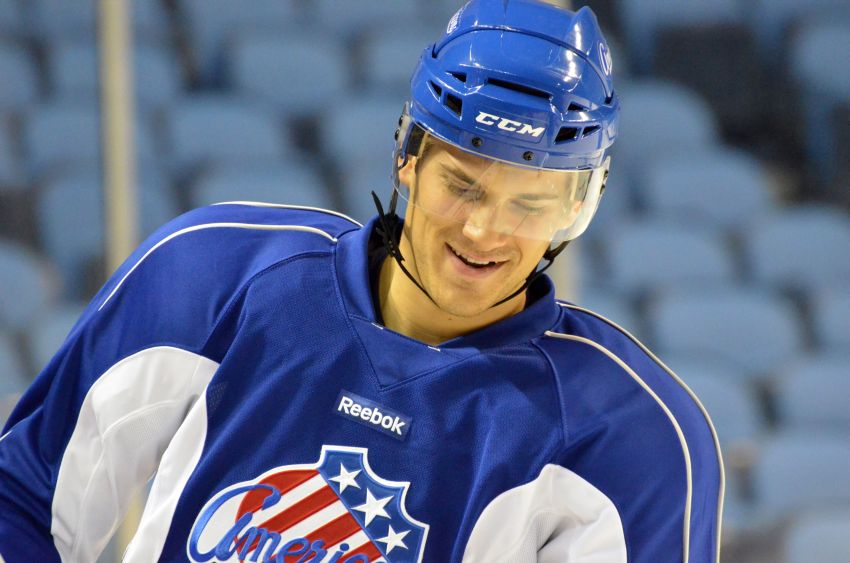 BUFFALO – They’re back for another unexpected AHL run, kicked to the minors again by the NHL lockout.

Marcus Foligno dominated at times during his late-season recall, compiling six goals and 13 points in a rollicking 12-game stretch. By mid-March, the winger had become a star and a Sabres fan favorite.

Both would be virtual locks to make the big club and hold pivotal roles as top forwards. Tonight they could’ve been playing in the Sabres’ fourth preseason contest.

Instead, they’ll be up early for the Rochester Americans’ 6:30 a.m. training camp session inside the First Niagara Center.

“You just hope there’s a deal done before Christmas, that’s for sure,” Foligno said Friday following the Amerks’ first on-ice camp session. “But for me, I’m excited to go down to Rochester and develop again. I’m still young. I’m only 21. I got a lot of years ahead of me.”

Of course, Foligno and Hodgson aren’t alone. Winger Corey Tropp became a regular late in 2011-12 and figured to have an inside track for a spot. Forward Luke Adam, one of the NHL’s top rookies early last year, would’ve been given a long look, too.

This isn’t the first time a work stoppage has forced prospects to Rochester. Much of the Sabres’ recent core group – Ryan Miller, Jason Pominville, Thomas Vanek and others – spent the entire 2004-05 lockout together in the AHL.

Those players have often spoken about how that season bonding and developing together on an elite AHL team became pivotal to their careers. The Sabres advanced to the Eastern Conference final a year later with some of them leading the way.

The veteran Sabres have shared their lockout stories with the youngsters.

“The guys they had in Rochester during the last lockout,” Tropp said, “now they’re all stars here on the team today. … You look at them and I think everybody in our dressing room has the hopes or looks at it as maybe one day being like all those guys.

“I think that’s a good stepping stone for everybody …  to have an opportunity to continue to develop. Who knows, maybe in a few years we can look back and say it was something similar?”

The Amerks won’t be the only stacked AHL club, though. Most NHL teams have sent established talent down.

“The whole league is going to be really talented early on with the young players from the NHL coming down,” Amerks coach Ron Rolston said. “So it’ll be a great league for the fans to come out and watch the quality of play and the tempo and pace, especially for us.”

The depth, Rolston believes, will help the Amerks’ development. The time a young defenseman like 2010 first-rounder Mark Pysyk spends each day going against Foligno or Hodgson during practice should be invaluable.

“You’re going to get better on a daily basis,” Rolston said.

Veteran Mark Mancari, an AHL star for years, wants Foligno and the others to embrace their experience, which “can go two ways,” he said.

“You can’t come down and just go through the motions,” the high-scoring winger said. “They got to take advantage that they’re playing, that they’re getting an opportunity to play because there’s a lot of guys at the NHL level that aren’t getting a chance to play.”

Notes: General manager Darcy Regier said winger Nathan Gerbe underwent offseason surgery for an undisclosed problem and is fine. … Mancari, who spent a year with Vancouver’s organization after six with Buffalo’s, said he “jumped at” the chance to return this summer. “You can never close a door in hockey,” he said. Mancari’s dropped 20 pounds and is down to 208, his lightest weight since he was 16 years old. He believes improving his foot speed could help him earn more NHL action. … Regier will spend more time scouting juniors and the Amerks during the lockout. He recently watched Mikhail Grigorenko, the 12th overall pick in June, play in Quebec City.