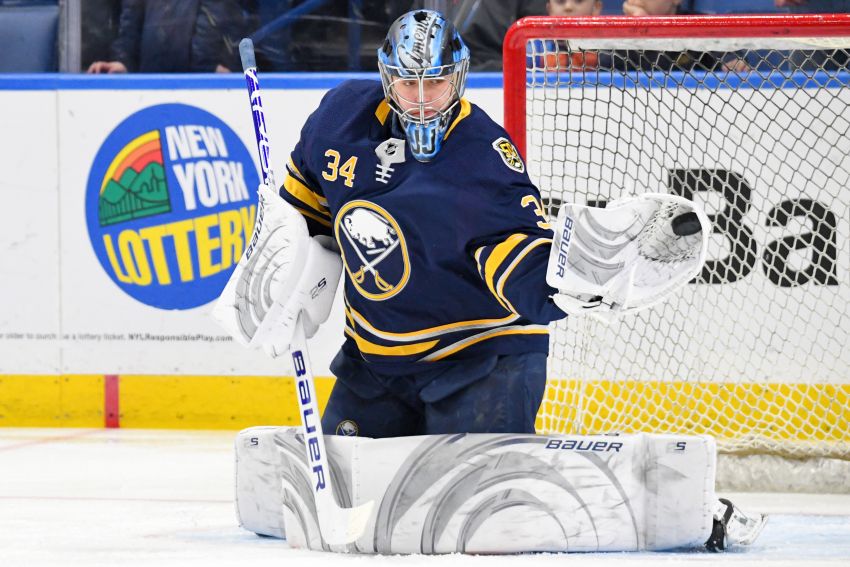 Could you blame him?

Johansson, 24, struggled mightily for the opening 12 minutes of his second NHL start, allowing three goals on four shots after stopping the first two he faced.

The Swede looked a bit off and uncomfortable in the crease. He knew the hook might be coming.

“It comes to your mind, but you push it away and just focus on the next one,” Johansson said.

When winger Nick Ritchie scored 1:45 after center Ryan Getzlaf, Krueger communicated with assistant coach Mike Bales, who’s in charge of the goalies, in the press box.

“Just bouncing back and forth, we were both of the opinion that he deserved to stay in,” Krueger said following the Sabres’ 3-2 loss inside KeyBank Center. “He got a very late call on playing today.”

Krueger wanted Johansson to work out his problems. The rookie found out Sunday morning he would be starting for Carter Hutton, a late scratch because of “family circumstances,” according to the Sabres.

His decision paid off, as Johansson settled down, stopping the final 22 shots the Ducks pumped on him.

Johansson made his biggest save 17:52 into the game, stymieing Troy Terry’s penalty shot after Sabres defenseman Lawrence Pilut hooked the center on a breakaway.

“That’s a highlight of the game, certainly, is the way he then stopped the penalty shot,” Krueger said. “There was some energy on the bench and he really played strong the rest of the way, so what a recovery from a difficult start where we were all part of it.”

Sabres winger Jeff Skinner said Johansson’s stop on Terry helped the Sabres “establish our game and sort of get back on the horse.”

“When things aren’t going well, you’re looking for sort of a little bit of a spark to kind of turn the tide,” he said. “He definitely gave us a big spark there.”

Suddenly, the Sabres had seized the momentum.

Then 11:41 into the second period, Sabres defenseman Rasmus Dahlin’s power-play goal narrowed the margin to 3-2.

The Sabres buzzed around Miller late, registering 15 shots in the third period and nearly tying the game a few times.

Still, the Sabres, who beat the Rangers 3-2 Friday in New York, couldn’t overcome those wretched 12 minutes.

“It’s extremely disappointing, the start,” Krueger said. “We haven’t had a hole like that at home. Important was, of course, the character they showed to try to get this one turned. We had opportunity in the third, for sure, to turn this score.”

Johansson said: “It was, for sure, a little bounce back (for me). So that felt nice. But I got to get better at starts. I felt like I let the team down a little bit at the start.”

What changed as the game progressed? How did the Sabres go from getting throttled to mostly controlling the play?

Krueger said the Sabres did not battle enough before the crowd of 16,131. When they started showcasing more, the offensive chances followed.

“It is really who we want to be and we were not who we wanted to be the first 10 minutes, there’s no question about it,” he said. “Fifty minutes of it wasn’t enough today because they just took such advantage of us not being ready at the start.”