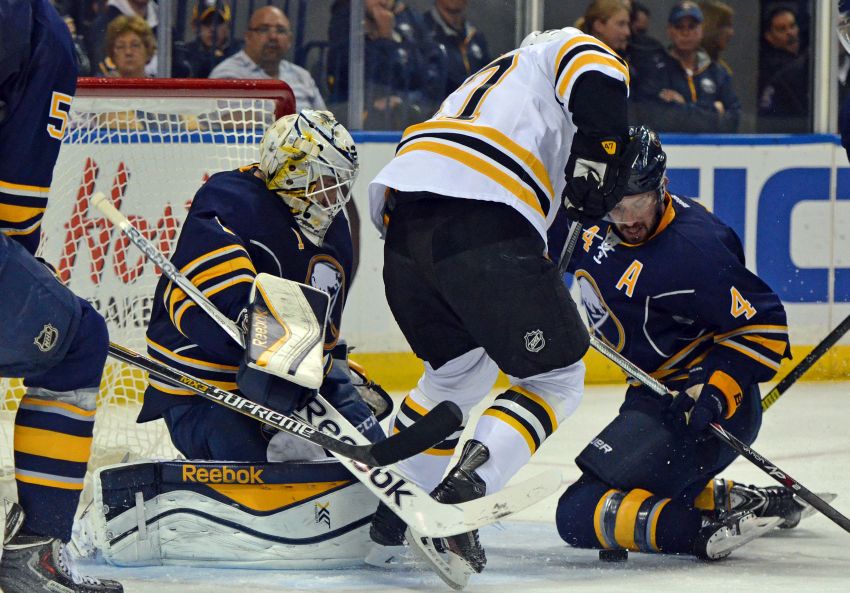 BUFFALO – Six games looks like a large enough sample size to judge the 2014-15 Sabres. The current edition is terrible, perhaps every bit as bad as last year’s hapless squad that finished dead last in the NHL.

Saturday’s ugly 4-0 loss to the Boston Bruins before 18,685 fans inside the First Niagara Center dropped them to 1-5 this season.

The feeble Florida Panthers beat the Sabres 1-0 on Friday, so they finished a two-game weekend home stand with zero goals, the first time they’ve been shut out in consecutive contests since the first two games of the 2003-04 season.

Opponents have blanked the Sabres in consecutive home games for just the second time in franchise history, according to the Elias Sports Bureau. The last games were Feb. 17, 1972 and Feb. 20, 1972.

The Sabres have seven scores in six games. Only four players have scored a goal. Their power play is zero of 22.

Coach Ted Nolan showed up uncharacteristically late to his postgame news conference, igniting speculation the Sabres had made a roster move. Nolan arrived a little past 10 p.m. looking agitated.

“It’s just get the frustration out in there versus in here,” he said.

How would Nolan characterize Murray’s feelings?

“Probably same as ours,” he said.

How can the Sabres still be such a wretched outfit?

They spent more than $40 million on respected veteran talent during the summer. The players who thrived under Nolan last season had a full training camp with him. Their talented youngsters are a year older.

The Sabres actually played decently early, outshooting the Bruins 16-12 in the first period.

“I thought that was one of our better periods this year, the way we came out and the way we played with some energy, and that’s what we’re looking for,” Nolan said.

“We came out hard,” Sabres captain Brian Gionta said. “For the most part this year, we haven’t had good starts. So we wanted to focus on that start.”

Center Cody Hodgson said the Sabres must bury their chances.

“The coaches are drawing up plays,” he said. “We’re getting chances. That’s working. We’re getting shots on net. At least we’re competing and battling and getting to the net. That’s the difference between winning and losing right now, banging a couple in.”

The Bruins had lost four of their last five games.