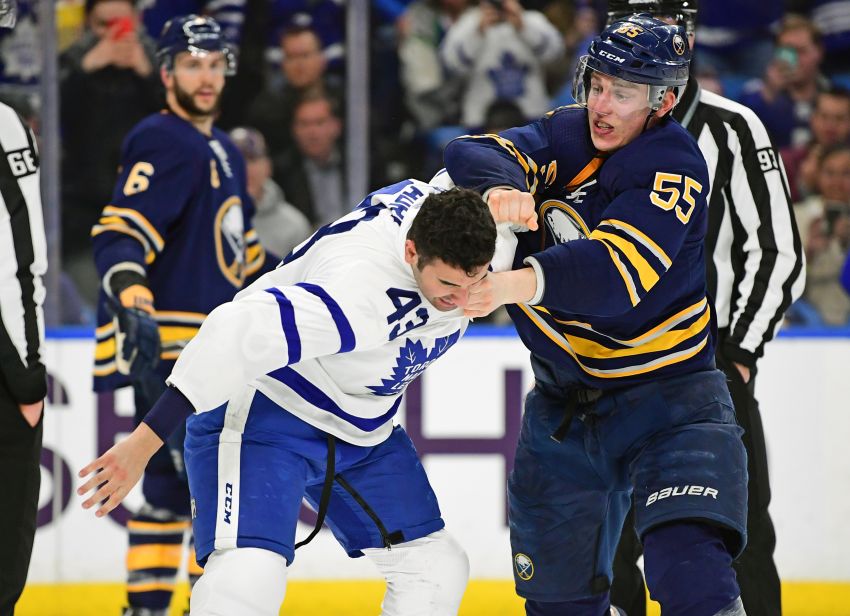 BUFFALO – In an otherwise awful season, the Sabres and their fans can look forward to this: Monday’s entertaining 5-3 win against the Toronto Maple Leafs was just the first tilt between the longtime rivals.

Kadri appeared to correct Sabres defenseman Rasmus Ristolainen on the number of game left during an argument from their respective penalty boxes following a second-period fight.

When Ristolainen held up four fingers and said “four more times,” it looked like Kadri emphatically told him the right number.

The video went viral and Kadri seemed perplexed when the exchange was brought up following the game.

“The more time, the better,” Kadri replied when asked about it.

The last-place Sabres would love more games against the playoff-bound Leafs. In the darkest days in their history, they’ve always feasted on their closest and fiercest rival.

“It hasn’t changed, fun game to be a part of, for sure, a lot of energy in the building, easy games to get ready for, for sure,” said Sabres winger Jason Pominville, who scored in his first outing against the Leafs as a Sabre in five years. “We had a great start. The fans got in it, their fans got in it. It was a great atmosphere.”

The Sabres silenced the noisy hoards of Toronto supporters – they probably outnumbered the hometown fans in the crowd of 18,705 – by pouncing on the Leafs.

“If we get an atmosphere like this anytime, especially on this ice and to be able to put a good product out for them, that’s motivation enough for us,” Sabres winger Sam Reinhart said.

Reinhart opened the scoring on the power play just 1:53 into the game, his 16th goal and 11th in the last 27 contests. Pominville followed at 3:43. Both goals were tipped in.

“We started on time against an opponent where we knew they were coming off of three losses,” Sabres coach Phil Housley said. “We knew they were going to be hungry and we got that all-important first goal.”

After two straight goals by center Leo Komarov tied it about halfway through the game, instead of wilting, the Sabres scored three straight goals to seal only their 10th home win.

“We stuck with it tonight and found a way, which was nice,” Pominville said. “Lately we’ve been doing it quite a bit. It’s something we got to build off of.”

Even without top center Jack Eichel, the Sabres are showing some signs of improvement. They’re 7-5-1 in their last 13 games.

Believe it or not, they’re 6-2 this season against the Tampa Bay Lightning, Boston Bruins and Toronto, the Atlantic Division’s top three teams.

Ristolainen played one of his best games this season, assisting on the first two goals. When Kadri cross-checked him following a hit, they fought, although very few punches landed.

Following just Ristolainen’s third NHL scrap, according to hockeyfights.com, he waved his hands and riled up the crowd.

Clearly, Ristolainen was annoying the Leafs.

“He’s a guy that night in and night out he’s annoying to play against,” Pominville said. “He’s one of those guys he’s always in your face, he finishes, competes, he battles and usually play against the other team’s top lines.

“Tonight he was able to get under their skin a little bit. He got a fight, and I don’t know if he got our fans going or their fans going, but he got some fans going.”

Housley said of Ristolainen: “He was physical tonight. He was agitated, he was hard to play against. But the thing I liked about his game was that he got his shots through, and guys were in a good position to make some tips. You saw that even in the third period, he’s up in the rush.”

Reinhart, Pominville and centers Ryan O’Reilly and Johan Larsson each had a goal and an assist for the Sabres. Winger Zemgus Girgensons scored the other goal.