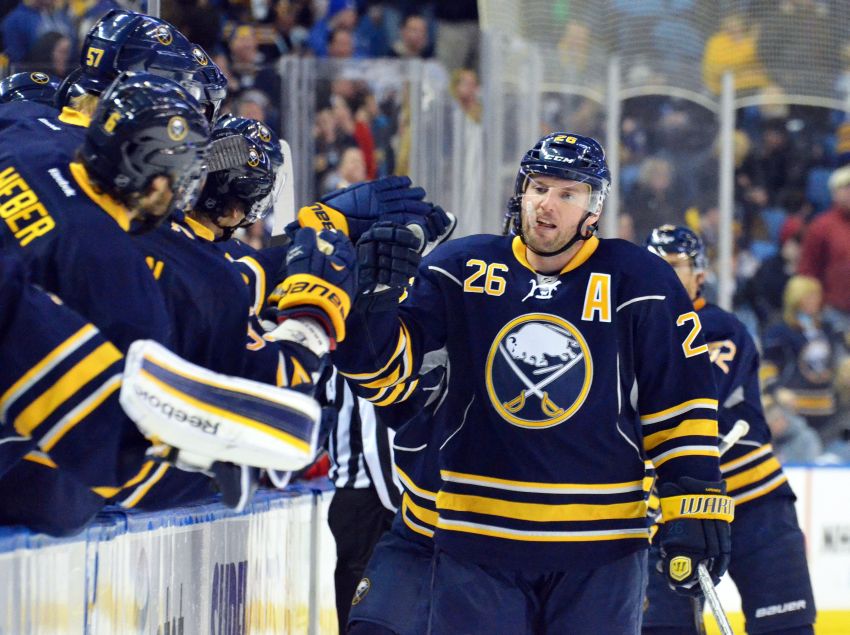 That time ranks 56th among NHL forwards. It’s second among Sabres forwards to linemate Jason Pominville’s 20:51 and sixth on the team.

“I’m happy with whatever I get,” Vanek said Monday inside the First Niagara Center after the Sabres, losers of six of the last seven, prepared for tonight’s contest in Ottawa against the Senators. “I think my ice time this year has been fine. I’m not going to demand more.”

Foligno and Hecht had 24 shifts, as many as Vanek. Ennis had 23.

But give Vanek more, right? Right now, the Sabres possess no secondary scoring. Vanek has a point on 70.4 percent of the Sabres’ goals (19 of 27). His line has combined for 18 scores and 41 points.

Hecht and Drew Stafford, a 31-goal scorer in 2010-11, have zero goals. Foligno, Mikhail Grigorenko and Steve Ott each have one. Ennis has two. Five other forwards have zero in 28 combined games.

“We have something special that we have a line that’s, as they say in Spanish, ‘en fuego,’” Ruff said. “Everybody else would be jealous of that line right now. But now we don’t have the secondary. So now we’re jealous of the secondary around the league when the league’s looking around going, ‘Holy man, they got a line as hot as any line in the league.’”

Ennis said about the secondary scoring: “It’s going to come. We just got to keep doing the little things. We can’t expect the top line to continue this pace. It’s got to change.”

But why not run Vanek ragged and squeeze every last bit of production from him?

Vanek played 23:01 on Tuesday against Toronto, the only time he’s gone over 20 minutes this season. A muscle strain had sidelined him the previous game.

“I think our line’s going well but we’re not producing wins,” Vanek said about the honor. “That’s about it.”