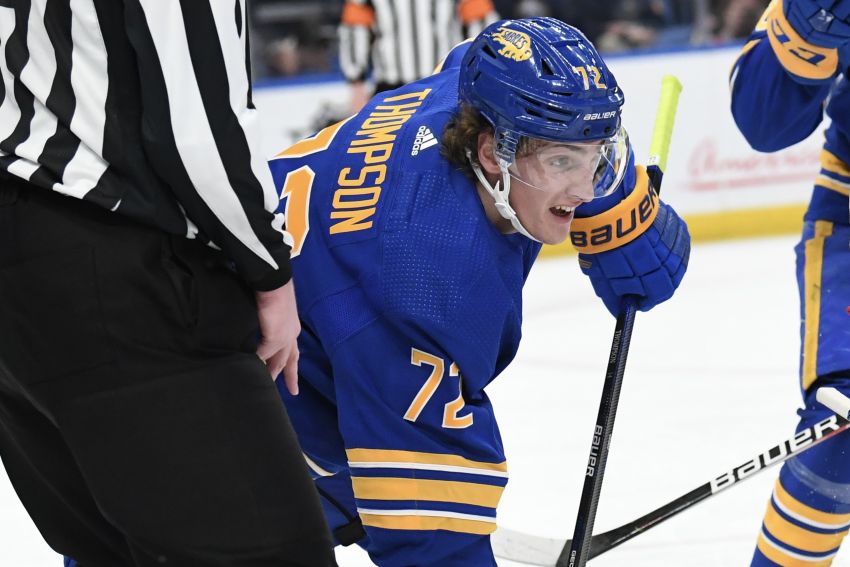 BUFFALO – After Sabres center Tage Thompson hit the 30-goal mark for the first time April 1, coach Don Granato told the burgeoning star that, hey, while that’s a nice number, there’s a heck of a lot more you can do.

Granato’s words served as a gentle reminder to Thompson, who has been playing with a chip on his shoulder throughout his breakout 37-goal season.

“I feel like I’ve known I’m capable of this, I feel like there’s still more to give,” Thompson said following Monday’s practice at KeyBank Center. “And I want to just push and try to get better, try to prove myself wrong. Sometimes just a goal for yourself and you want to see if you can beat it. And as you’re approaching the goal, the goal keeps moving further and further away from you.

“I think it’s good to have something like that so you’re always chasing something that you know you’ll be able to reach.”

Right now, Thompson is chasing 40 goals, a gaudy number he said he never thought he would be pursuing seven months ago. While he possessed loads of potential and enjoyed a strong finish last year, he hadn’t scored more than eight goals in a campaign.

The 6-foot-7, 218-pound Thompson, whose career took off when Granato shifted him to center at the end of training camp, has developed into one of the NHL’s most lethal scorers. Since Feb. 13, he has scored 23 goals in 34 games, the NHL’s third-highest total.

The American has two games left to try to become the 12th player in franchise history to score at least 40 times in one season. He would be the first Sabre to hit one of hockey’s prestigious numbers since winger Jeff Skinner, his linemate, scored 40 times in 2018-19.

“It’d be really an incredible achievement, I think, personally,” Thompson said. “Obviously, it’s hard not to think about it but you try just to kind of block it out and focus on the team stuff first. I think when you start focusing on the numbers, that’s kind of when you’ll probably get snakebitten. Chances, they’ll start not going (in) for you.

“I think you can kind of keep that team-first focus and I think the goals will follow.”

“They know if they take care of their business, those rewards of goals and more goals will follow,” Granato said. “That’s what I like about our group right now, they’re on task, pretty focused and committed to that.”

Thompson’s commitment to defense has helped him earn Granato’s trust, and he utilized him late in Saturday afternoon’s 5-3 win. Thompson, who scored earlier in the game, said he was “cheating down the ice” when the New York Islanders pulled goalie Ilya Sorokin.

“That was one I was hunting down pretty hard there,” Thompson said. “I think that’s good. We obviously want that hunger, want the hunger to score. I think that only helps our team know when guys are competing with one another, whether it’s guys trying to outscore each other, do whatever. It’s good, friendly, healthy competition. I think it only pushes everyone.”

Granato said if the Sabres have another empty-net situation Thursday against the Boston Bruins or Friday versus the Chicago Blackhawks, Thompson will be on the ice.

If Thompson hits the 40-goal mark, he would be the Sabres’ first 40-goal, 70-point scorer since Vanek registered 43 goals and 84 points 15 years ago.

Thompson’s playmaking skills have quietly blossomed this season, and his 30 assists rank second on the Sabres behind Dahlin’s 40.

Granato said Thompson has gained “a calm and a confidence” that has helped him stop forcing plays.

“When you’re not forcing things, you’re able to read plays better,” Granato said. “A lot of times you pick up the puck as a young guy … and you’re almost trying to prove your skill set. And so you force a play, you press a play, ‘I want to make a play here.’ And Tage is at a point now where he’s like, ‘I don’t have to make a play here. If there’s a play to be made, I am going to make it. I’m going to extend the possession long enough to see if that might open up or that might open up.’

“So he’s actually seeing layers of options, not the only option he wanted, per se. And he has enough skill to keep the puck and keep the opponent at bay, and that’s what we’re seeing him do. … He’s moved himself into that category where he buys himself time and space, creates time and space to wait for a defenseman to flinch, back off.”

Thompson said getting so many puck touches helps him get into the game and boosts his confidence.

“As the game moves on you just have that confidence that you know you’re going make a play,” Thompson said. “I feel more comfortable coming up the middle of the ice, too. You see a lot more of the ice and instead of being locked onto a wall, I think that’s kind of why maybe some of the passing and playmaking is showing up a little more this season.”