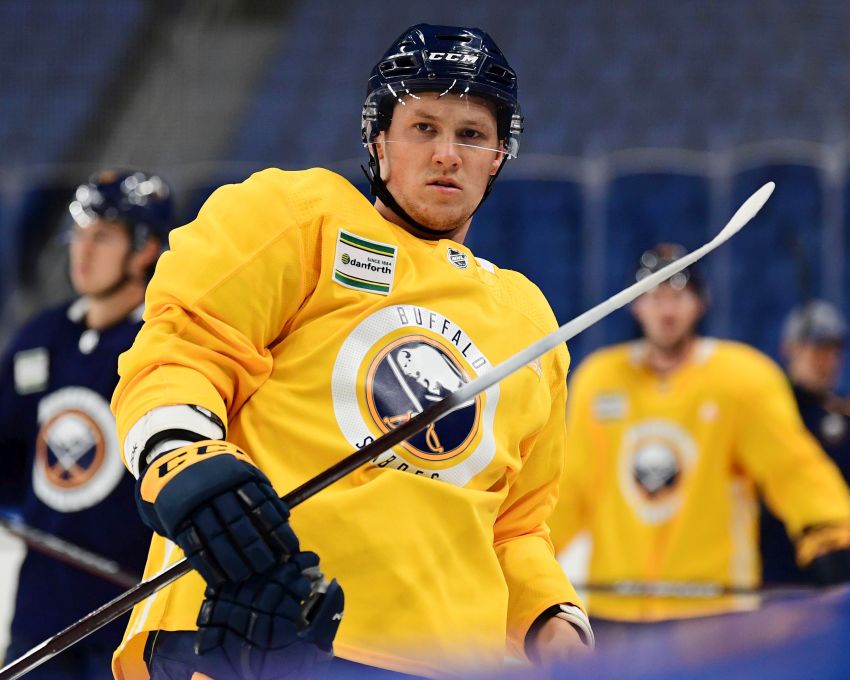 BUFFALO – As defenseman Ryan Murray started carrying the puck out from behind the Blue Jackets net Monday, Sabres winger Jeff Skinner lurked close by and followed him up the slot.

Before Murray could skate past the circles, Skinner stripped the puck and took off toward the net. The 40-goal scorer then beat Columbus goalie Joonas Korpisalo, tying the game at 11:58 into the second period.

Skinner’s supreme abilities to hound the puck and hector opponents have become perhaps his most underrated assets.

“It’s something that sort of gets better with experience,” Skinner said of stripping the puck. “It’s one of those things you try to focus on. Obviously, I’m not sort of going to overpower a lot of guys defensively, so sometimes you have to find other ways to get the puck.

“For me, (trying) to use my stick to separate their stick from the puck is sort of a strategy I have to take.”

Fresh off a dynamic season that earned him an eight-year, $72 million contract, Skinner, 27, has started his 10th NHL campaign strongly. The two-time NHL All-Star has scored two goals and three points entering tonight’s home game against the Montreal Canadiens.

Through his first month as coach, Krueger has noticed Skinner’s commitment to defense.

“His defensive game is improving day-to-day here since the beginning of camp,” he said. “He’s really working hard to participate in the game without the puck and battle the way we need him to.”

Even after enjoying a career year, Skinner believes he can keep growing. Playing more of a two-way style consistently could buoy that.

“The more you know the league, the more you know the guys you’re playing with,” said Skinner, whose late-season slump cost him a chance at 50 goals. “The more situations you have been in the easier you can draw off of experience and use that to your advantage. I’d like to think I’m still going up.”

Krueger’s system stresses staying connected. That, according to Skinner, brings predictability when you don’t have the puck.

“If everyone is on the same page and sort of knows where each other is going to be, it allows you to not worry about that part of the game,” he said. “That frees you up to use your creativity.”

“It’s a new coach, new season, a lot of new guys,” Skinner said. “I really didn’t have an expectation coming in of who you’re going to play with. Over the course of the year guys are going to play with everyone kinda and lines will get mixed up. I think getting off to the start of the season you want to try to find some chemistry.”

Krueger said he wants to “develop two lines that have a regular offensive punch.”

“We see with Marcus Johansson, with Jeff, a real synergy that’s growing and developing,” he said. “They really are finding each other and feeding off each other. Sobie has done a great job in supporting them in both directions and adding some good grit to that line. …

“It’s not about splitting anybody up. It’s about spreading out the power of the lineup and the depth that we need to have here.”

Johansson, who set up Skinner’s goal Saturday, said worrying “almost too much about being in the right position defensively” has cost the line some offense.

“We’ve almost played better defensively than offensively,” he said. “We kind of need to spend more time in the offensive zone.”

Why has the defense been such a priority for the trio?

“It’s new systems,” said Johansson, who signed a two-year, $9 million contract with the Sabres on July 6. “It’s, for me, new teammates, new role playing center and all that. There’s a lot that goes into it, but the good thing is we’re focusing on defense first.”