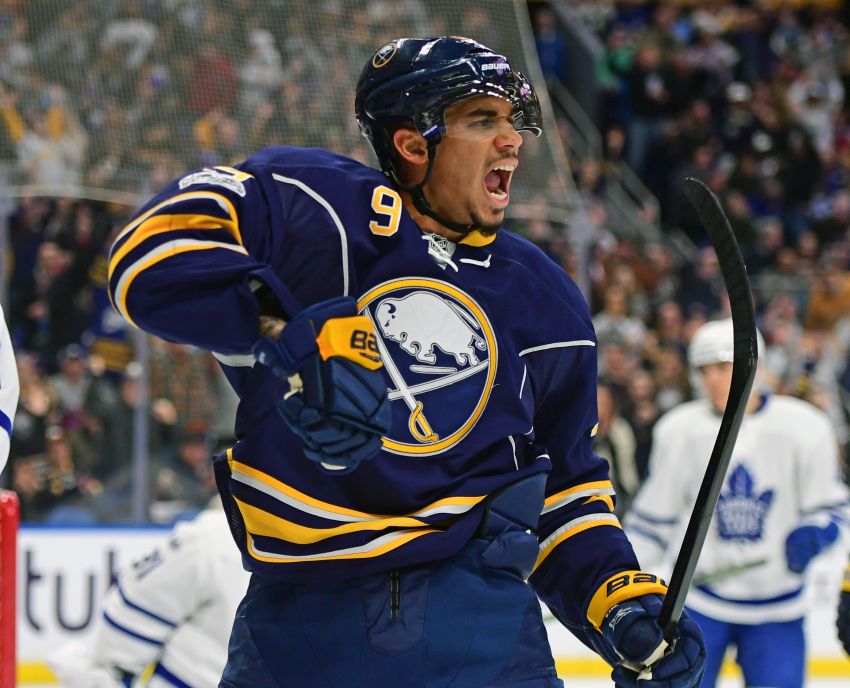 BUFFALO – The 11,000 or so Toronto Maple Leafs fans who invaded a packed KeyBank Center on Saturday – they greatly outnumbered the home portion – started making their presence known about 20 minutes before the opening faceoff of the Sabres’ entertaining 5-2 win.

This visit from the upstart Leafs was different than recent ones throughout their sorry run of futility. For the first time in a long time, Toronto is good, filled with prime young talent and positioned in a playoff spot.

Toronto fans, who have waited a long time for the Leafs to rank among the NHL’s elite, are understandably excited.

So before the game began, they got loud and raucous, chanting, “Go Leafs, go.” They roared when the Leafs skated on the ice and sang along with “O, Canada.” They didn’t let up after the contest started, either.

But by the second period, after the Sabres scored three straight goals to pull away – young star Jack Eichel scored twice and assisted on the other goal – the Leafs fans were silenced.

Sabres fans had their building back. Their team had the game.

“It was just fun,” said Sabres winger Tyler Ennis, who had two assists. “There was a lot of energy in the rink right from the start, a lot of of emotion – and those are fun games. We haven’t had a lot of those games in a while.

“I think we really felt that energy. I think our fans were really loud and gave us a boost. I think we played with a lot of jump, a lot of energy all game.”

What about silencing those Leafs fans?

The Sabres, whose rebuild was supposed to be ahead of Toronto’s, trail their fiercest rival by 11 points. Still, perhaps they take some solace in continuing the Leafs’ run of futility here.

The Sabres have been downright terrible in second periods this season, getting outscored 79-59. Saturday’s second started ominously, too, with slick Leafs youngster Auston Matthews scoring his 34th goal – that tied Wendel Clark’s franchise record – to tie it at 2 at 2:22.

Eichel, however, answered 25 seconds later on the power play, beating Leafs goalie Curtis McElhinney with a wicked one-timer from the left circle.

The Sabres never relinquished the lead. Sabres defenseman Dmitry Kulikov scored on another power-play one-timer at 5:59.

“We played a lot more aggressive,” Eichel said of the second period. “I think that’s what we need to do. Our D were coming down the walls. Our forwards were making their D turn pucks over.”

Kulikov, a colossal disappointment as he has battled injuries all season, returned after an upper-body injury sidelined him nine games. The Russian began the night with one goal and two points in 39 contests. He also assisted on Eichel’s first goal, so in just a few minutes he doubled his goal and point output for the season.

“We know the type of player that he can be and the skill that he has,” Eichel said. “That shot’s a real weapon. He did a great job distributing the puck tonight.”

Sabres coach Dan Bylsma added: “The last two days have been (Kulikov’s0 most aggressive and physical and the way he can play. He stepped right into the game and showed that.”

“I was just trying to take advantage of the opportunity that I get in the last eight, seven games,” he said.

Eichel scored again from the right circle at 13:12.

The Sabres, who have had trouble closing out late leads, won their 18th home contest.

By the end, many of the Leafs fans in the capacity crowd of 19,070 departed early.

Sabres center Ryan O’Reilly opened then scoring early and also added an assist. The Sabres improved to 10-0-1 when he has two or more points.