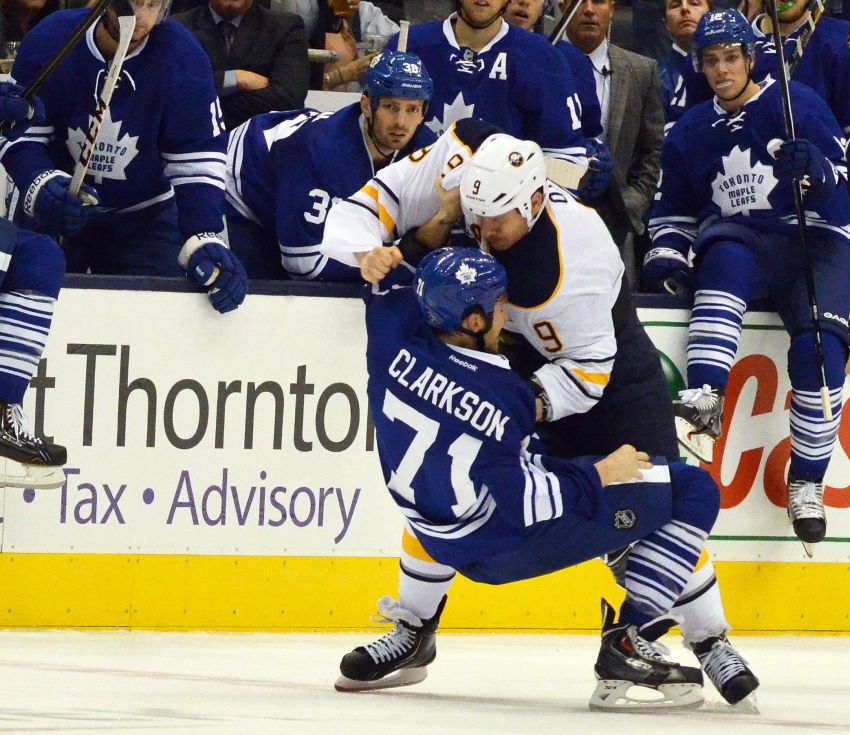 TORONTO – In a first period reminiscent of the Ron Rolston era, the Buffalo Sabres fell behind 2-0 by the 13:35 mark Saturday and looked overmatched against a hungry Maple Leafs team anxious to end a three-game losing skid.

“Ted came in and told us and said, ‘You guys are garbage,’” Sabres tough guy John Scott said.

The bottom-feeding Sabres appeared finished after Nikolai Kulemin made it 3-0 11:49 into the second period.

“Now you find out reasons why the record is the way it is,” Nolan said.

But the Sabres have rapidly improved under Nolan, who took over for Rolston on Wednesday.

In the past, they might’ve wilted. Instead, they clawed back, scoring twice during the third period and getting within one goal before falling 4-2 inside the Air Canada Centre.

“I think it shows we can compete, we got good character,” said Sabres winger Tyler Ennis, who scored a power-play goal in the third period. “I like that we fought back.”

“The first period we were terrible,” he said. “We were flat. We didn’t have any energy.”

The Sabres actually outshot an opponent (35-22) for only the third time this season.

“I was more impressed with the game tonight than I was last night,” Nolan said.

The Sabres’ first visit to the ACC since a wild Sept. 22 preseason brawl produced some fireworks. Nothing materialized Friday, something both teams had promised leading up to the game.

But a mini-melee erupted 5:34 into the third period when Leafs captain Dion Phaneuf lost an edge and fell down on his own as Scott approached him.

Moments later, Phaneuf went after Cody McCormick and Frazer McLaren tried getting at Scott as officials held them back.

While no one fought, Scott, who ignited the exhibition brawl and has a reputation around the NHL, received two roughing penalties and a 10-minute misconduct, enough to basically end his night.

“I’ve got some where I didn’t do anything, and that definitely falls in that category,” Scott said. “So I don’t really know why I got 14 minutes. The ref obviously had reasons for it. So I guess I’ll just have to live with it.”

Did the referee say anything to Scott?

“No, I didn’t think I did anything wrong,” he said. “I went for a hit, Phaneuf bailed. I get dragged down from behind and get 14 minutes. So I think there was more of a precaution. They didn’t want anything to boil over.”

Scott said reputation calls are “getting a little old.”

“But I understand it,” he said. “I definitely have a reputation that comes with me. Obviously, this year isn’t helping. What are you going to do? I’m just going to keep doing my thing.”

James van Riemsdyk, scoreless in five straight games as a center, switched back to the wing Saturday, burning the Sabres for two first-period goals.

He scored a similar goal on the power play later, again tipping Franson’s point shot in.