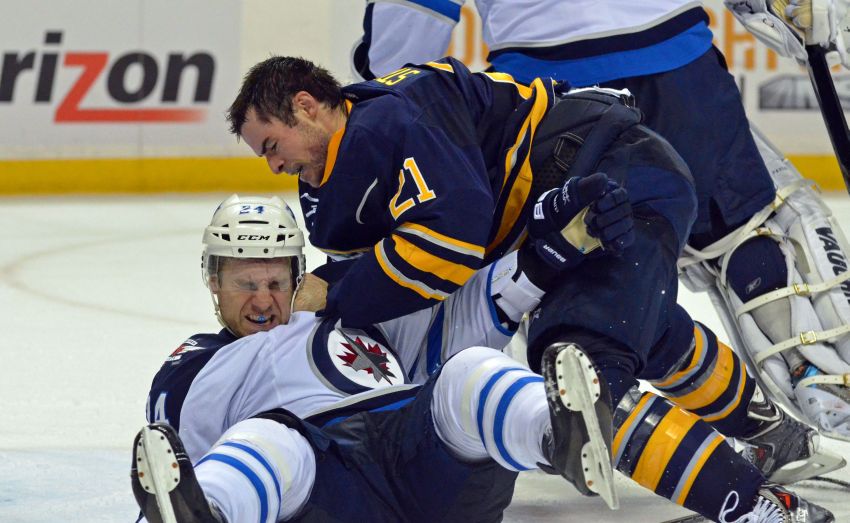 BUFFALO – Just a few weeks ago, if they had fallen behind after frittering away a strong start, the Sabres would’ve been cooked. Heck, they might’ve gotten run out of their own building.

But the bottom-feeding Sabres have slowly been improving under interim coach Ted Nolan. Their game is cleaner. Their efforts are much better. They’re finally responding to adversity.

Tuesday’s exciting 4-2 victory against the Winnipeg Jets, the Sabres’ first triumph this season when trailing after two periods, proved that.

The Sabres pounced on the weary Jets early, outshooting them 19-7 in the first period. Still, they had nothing to show for it. Then, the Sabres imploded during the second period, falling behind 2-0.

But they roared back in the final 20 minutes, getting goals Marcus Foligno, Matt Moulson and Matt Ellis to secure just their third regulation win in 34 contests.

“One hundred percent,” captain Steve Ott said when asked if the Sabres would’ve lost a game like Tuesday’s earlier this season. “We’ve seen the change happening. I think that’s what a good image of tonight is, the team didn’t fold over first. We continued to stick with it and we played through it.”

Nolan added: “The one thing we’ve been trying to work on is our consistency and just keep going. If you keep going, usually good things happen. Tonight it was nice to see the team rewarded for not giving up. We continued to work. We got the breaks.”

The Sabres are now 8-23-3 this season. They had been 0-20-0 when trailing after two periods. They scored four goals for only the second time this season.

“I think it was due, definitely,” Sabres defenseman Christian Ehrhoff said about the goal scoring. “We only scored one goal, I don’t know how many games in a row (two). We had a lot of chances before. Today we just got a few at a good time.”

That time was the third period.

“No one hung their heads,” Foligno said. “That showed a lot of character in the room that we had a pushback.”

Foligno, who was benched for taking too many penalties last game, tied it at 50 seconds, ending a 12-game drought.

“The way he played, the way he skated, the way he went to the net, the way he used his body,” Nolan said. “I think one shift he had three good hits. … He plays that way, he’s going to be a powerful force in this league.”

Moulson scored the go-ahead goal on the power play at 2:31. Ellis added some insurance at 13:38.

“It’s nice to finally see some production,” Ott said. “We scored four goals tonight. I’ve said many times you score three or four goals in this league you have a strong chance of winning on a nightly basis. Tonight it was nice because we did it all ways and everybody contributed.”

Early on, it looked like they might throttled the Jets, who won Monday in Columbus. But the Sabres couldn’t beat goalie Ondrej Pavelec despite loads of shots and zone time.

Ott added: “We were getting pucks in deep. We just continued to work and were getting second opportunities back.”

Winnipeg’s Mark Scheifele scored 1:02 into the second period, then again 36 seconds later, stunning the crowd of 17,795 fans inside the First Niagara Center.

What happened in the middle period?

“I think that lifted us up again and it kind of snowballed from there,” Ehrhoff said.

“That so-called fourth line, they’re one of four for us,” Nolan said. “One thing we want to do is try to create a balanced attack. Tonight with Flynn, Ellis and Porter, they did a great job.”

The hardworking Ellis, who was recalled Friday, hadn’t scored an NHL goal since Jan. 13, 2012.

“It was huge, especially no better guy, Matt Ellis,” Ott said. “He’s put his hard work and his dues in.”

One thought on “Sabres shake off awful second period, roar back and beat Jets”