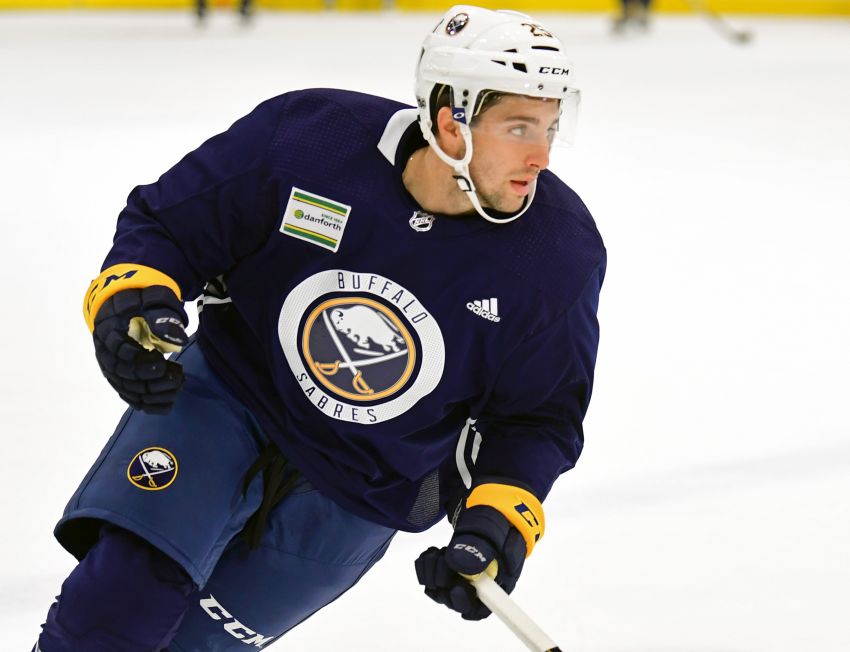 BUFFALO – Among the 39 players the Sabres used in their six preseason games, very few stood out.

But those Sabres are expected to make notable contributions. What about the bubble players, the AHL guys looking to crack the big club out of training camp?

After compiling one goal and two points in the first three preseason games, Griffith was often the best player on the ice in Friday’s 3-1 loss to the New York Islanders inside KeyBank Center, narrowly missing about four prime scoring chances.

“Seth Griffith was one of our best forwards tonight, creating a lot, was in on the forecheck,” Sabres coach Phil Housley said following the preseason finale.

Twelve forward spots are likely set, leaving just one or two open. Griffith, a lethal AHL scorer who has struggled to produce in the NHL, possibly secured his place with the Sabres on Friday.

The Sabres have 18 forwards, 11 defensemen and two goalies (31 players) on the roster. They must pare that down to 23 by Tuesday. Reassignments, however, could come as soon as today.

After starting Friday on the right wing beside center Sam Reinhart and Matt Moulson, Griffith moved up beside Eichel and Evander Kane late in the contest. Griffith pumped a team-high three shots on goal.

“Coming into a new camp, new system, new coaches, kind of a fresh start for me,” Griffith said Friday morning. “I was really looking forward to it. I played three games right off the bat. It felt good the first game, I just kind of kept it going.”

Why has the 5-foot-9, 192-pound Griffith, who played with three NHL teams last season, thrived this month?

It’s possible the Sabres could keep Griffith so they don’t lose him on waivers. He got claimed three times last season.

Winger Jordan Nolan made his Sabres debut, skating 11 minutes 24 seconds, mostly on the right wing with center Jacob Josefson and Johan Larsson on the fourth line.

“He looked pretty comfortable,” Housley said. “You could see he’s a little rusty. He’s been off the ice for six days and you get one practice and thrown into a game. You can’t really expect a lot.”

Nolan added: “It was pretty easy to jump in and play.”

Nolan was on the ice for the Islanders’ first goal before creating Reinhart’s score by pressuring Ryan Putlock into turning the puck over deep in the New York zone.

“Maybe they’re just giving me that because it’s my first game,” he joked.

The Sabres claimed Nolan, the son of former Sabres coach Ted Nolan, off waivers Wednesday from the Los Angeles Kings.

Sabres defenseman Zach Bogosian left the game after playing three shifts in the third period. Housley had no update.

The Sabres scratched defenseman Marco Scandella, who has been resting the hip he had surgically repaired in May.

Since Scandella, an offseason acquisition from the Minnesota Wild, missed all six preseason games, his Sabres debut will likely come in Thursday’s opener.

While Scandella could’ve played Friday, Housley wanted to be cautious.

“We don’t want to put him into action too early where he has a setback,” Housley said.

Notes: Since Housley hasn’t named a captain, he has been using three alternate captains each game. Kane and winger Kyle Okposo and defenseman Rasmus Ristolainen each wore an ‘A’ Friday. … Sabres defenseman Victor Antipin, a newcomer from Russia, played with Ristolainen on the No. 1 pair. … The Sabres announced a crowd of 16,967. … The Sabres have today off.