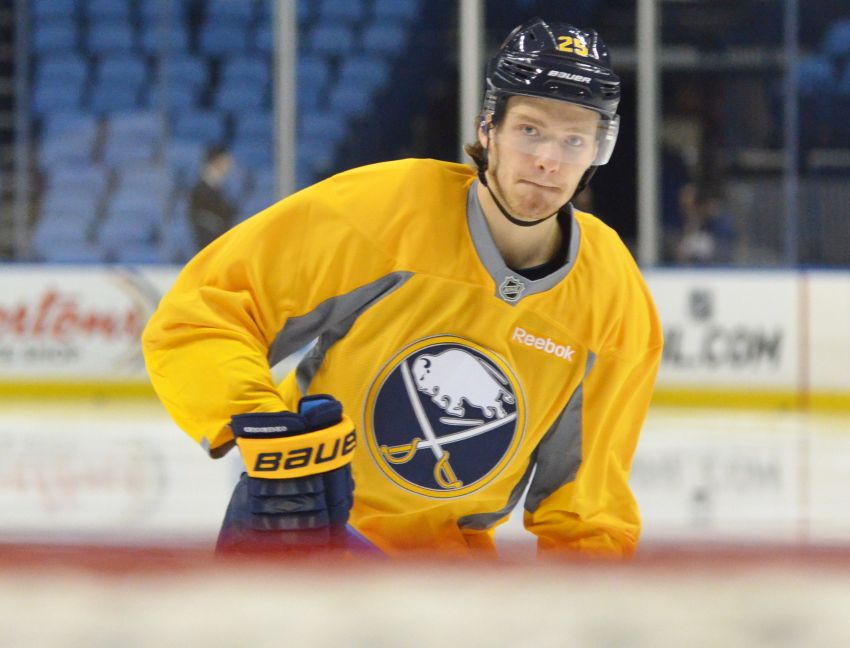 “But this is non-negotiable,” Nolan said this morning inside the Riverside Ice Rink. “It’s one of those things that has to be done.”

Update: Grigorenko’s agent, Jay Grossman, confirmed to the Times Herald that Grigorenko won’t be reporting to the Remparts, something Le Soleil’s Kathleen Lavoie first reported. Grossman declined further comment until he and Grigorenko speak to the team.

“The Sabres sent him here. They feel like it’s the best option. We’re going to see what happens.”

“I think he’s just thinking right now, obviously. It’s hard to take. I was in the exact same spot at 19 years old when I was sent down. It’s a tough spot to be put in.”

On what the QMJHL offers:

“We provide a great environment here. A lot of players were dominant junior players at 19 and they benefited from that. They moved on to go have great careers in the NHL.”

On what else Grigorenko can prove:

“You can learn every day wherever you are. Go through the roster of the Canadian and U.S. team and see how many guys played college or junior at 19. A lot of the superstars in the NHL did. There’s a lot to learn at the junior level.”

Back to the blog …

The move was hardly surprising. Nolan hinted at it earlier this week when the world junior championship, where the Sabres sent the Russian for a month, ended.

Nolan said he met with general manager Tim Murray and president of hockey operations Pat LaFontaine about the move.

“That’s another managerial decision (for) what’s best for Grigorenko for the long-term being a Buffalo Sabre,” Nolan said.

In other news, Nolan said he hasn’t had any lengthy discussions with Murray, who took over Thursday, about his future. Murray told a Canadian radio station Friday the Sabres would probably take the interim tag off soon.

“I mentioned before, one of these days I hope it does,” Nolan said about the tag. “But it’s not one of my things I’m thinking about. I’m trying to get this team better right now.”

He added:  “We had brief discussions about it but not necessarily at it.”

“I still need to kind of see what’s going on in the bigger picture,” Miller said. “It’s something last time I really talked to Pat about things he was just getting his bearing and getting a look around. So I guess it’s time to talk to him again, see what’s going on his side of things. I’m going to wait to have any conversations with those guys before I start getting too far along.”

In injury news, with centers Cody Hodgson and Ville Leino ready to return, the Sabres have sent Johan Larsson to Rochester.

“We just need him on a consistent basis to get those 22, 24 minutes a game,” Nolan said.

3 thoughts on “Sabres send prospect Mikhail Grigorenko back to junior”