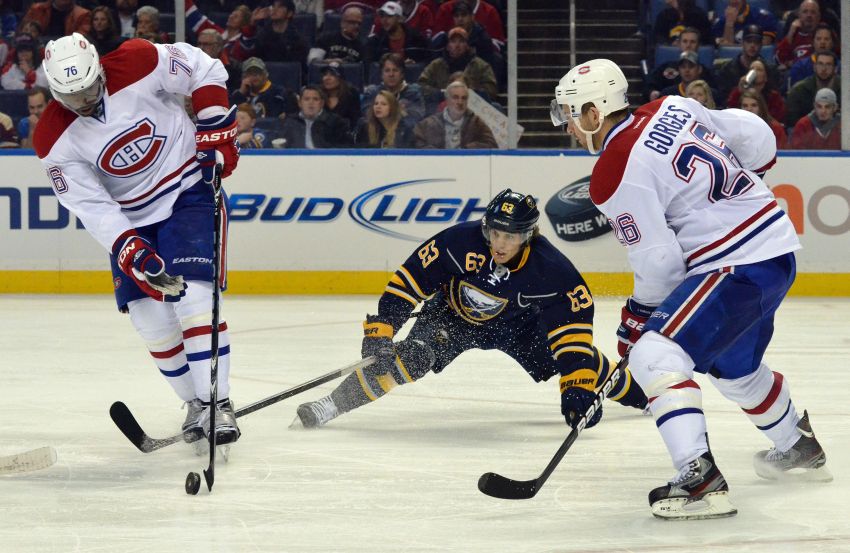 BUFFALO – Fifteen minutes after a wretched, season-killing 5-1 loss to the Montreal Canadiens, the door to the Sabres dressing room swung open.

Inside, players had just finished discussing their embarrassing play and the path for the final seven games of this lost season.

Where do the hapless Sabres go following one of the worst efforts in recent memory?

“We talked amongst ourselves, obviously, what attitude are we going to have going forward here?” Sabres winger Steve Ott said. “Seven games left, do we fold tent and shut it down, or can we stack up and continue to move forward?”

Some would say the Sabres folded their tent Thursday while getting outshot 42-15.

“It really comes down to this,” said Sabres defenseman Tyler Myers, who played his 256th NHL game Thursday. “We lost every single battle. It was the worst effort the Buffalo Sabres have put on the ice since I’ve been a part of it.”

Sabres goalie Ryan Miller added: “We weren’t sharp. We didn’t play the game plan. We got our butts kicked.”

Well, at least the crowd mostly refrained from booing the Sabres. At times, they were a smattering of boos. But it never reached the intensity of Sunday’s 3-2 shootout win here over New Jersey.

The feckless Sabres gave the capacity crowd of 19,070 fans inside the First Niagara Center plenty of opportunities to jeer them.

Perhaps the legions of Canadiens supporters silenced the locals. Maybe Sabres fans are simply too beaten down to care.

If Sabres fans had heckled with more intensity, Ott, who was critical of the jeering Sunday, would’ve understood.

The faint playoff hopes the Sabres built after three straight wins have all but vanished. On Tuesday, a win in Winnipeg would’ve inched them to within two points of eighth place.

Instead, that 4-1 loss to the Jets and Thursday’s dismal effort has the 11th-place Sabres six points back of the eighth-place New York Islanders.

This one started ominously.

The Canadiens generated a two-on-one break 30 seconds into the contest. The Sabres stymied it, but it turned out to be a harbinger.

It couldn’t ignite his team.

Brendan Gallagher iced it 4:36 into the second period.

Andrei Markov’s power-play score made it 4-0 before the period ended.

How do the reeling Sabres pick up the pieces and handle today’s practice?

“If you’re a professional, you show up and do the work,” said Miller, who was replaced by backup Jhonas Enroth for the third period. “The way I’ve known to come to the rink after a situation like this is you come in, do the work and reset. If you start moping around and think somebody else is going to do something for us, we’re in the wrong league.”

Flynn added: “I expect guys to look in the mirror, come back in tomorrow and have an upbeat practice.”

Ott said he was “one of the 20 guys that wasn’t good enough.”

“That’s the onus on each other in here to bring your best game and be ready to go and not have passengers,” he said.

How do players learn they can’t be passengers?

“That’s what calling a good pro is, is a guy that (shows) consistency, shows up for your team every night,” Ott said.

The Sabres had very few of those Thursday.