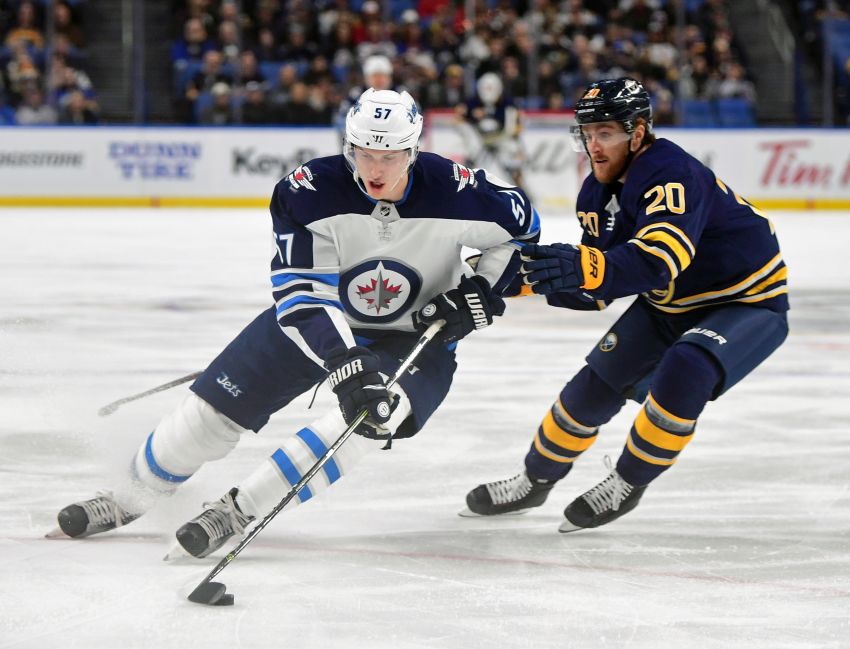 BUFFALO – The list is, well, rather short. During the Sabres’ disastrous 2017-18 season, just one forward, winger Scott Wilson, exceeded expectations.

Wilson, 26, quickly morphed into a reliable fourth-liner after the Sabres acquired him from the Detroit Red Wings on Dec. 4.

But Wilson, a veteran of 172 NHL games, understands his true role and tried to reshape his body over the summer so he would be more effective.

He wants to be a heavier checker.

“I’ve never been a guy that’s coming into camp on the top two lines,” Wilson said Wednesday inside KeyBank Center. “It’s on me, so … I did a lot of good work this summer putting on some weight. That was something they wanted me to.”

Wilson is still listed at 5-foot-11 and 183 pounds, his same weight as last season. But he said he packed on 15 pounds.

He added: “I’m not the tallest, but I feel a lot better with putting on more weight and good weight, so I’m excited to see it translate.”

Wilson, having come through the Pittsburgh Penguins organization, isn’t used to losing. He won two Stanley Cups, playing regularly during the Penguins’ run in 2017 run.

So with his offseason about two months longer than usual, he tried to utilize the extra time.

Other than more biking and running, Wilson said he did his normal summer training. He simply ate more.

“I’ve never been a huge eating guy, but I took advantage of it this summer with having a longer summer than I normally have some of the other years,” said Wilson, who signed a two-year, $2.10 million contract July 1.

Through two weeks of training camp, Wilson, who will play in Wednesday’s preseason tilt in Pittsburgh, said he feels a difference with his added weight.

So far, Wilson has impressed coach Phil Housley. His status as one of two former Cup winner on the Sabres – winger Conor Sheary is the other – is vital for a team emerging from the abyss.

“I just like the way Willy plays the game,” Housley said. “He’s hard on the forecheck, he’s physical, he brings that presence in our locker room, winning Cups, and he’s able to share the information.

“Right now, he’s in a good place as far as the way he’s playing the game. He’s playing with speed, he’s getting some opportunities, he’s getting looks. I’ve just really liked his camp up to this date.”

Wilson almost certainly has a roster spot locked up. Considering the depth the Sabres added, he likely won’t move up to scoring lines as much as last season, when he compiled six goals and 14 points in 48 games with Buffalo.

This season should be more stable for Wilson. After playing three games with the Penguins early last year, they traded him to Detroit, where he lasted 17 contests.

In a dizzying 44-day stretch, Wilson played for three teams. Now, he knows he has a terrific chance to stick in Buffalo.