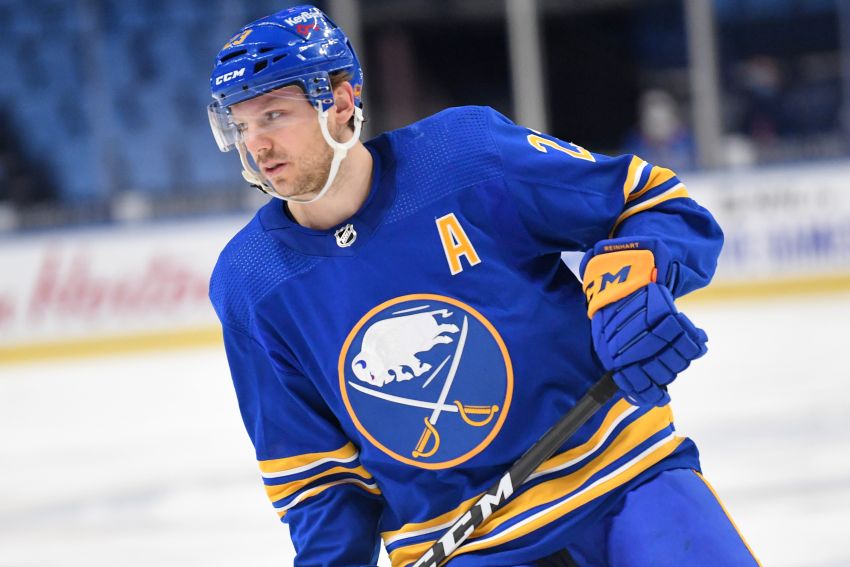 Reinhart skated this morning beside top center Jack Eichel and Taylor Hall inside Wells Fargo Center, according to The Buffalo News’ Lance Lysowski, a sign he could play.

If Reinhart can’t play, Krueger said Casey Mittelstadt, who’s on the taxi squad, would replace him.

Reinhart was injured in a collision behind the net in Friday’s 2-1 loss to the Washington Capitals.

In other lineup news, goalie Linus Ullmark left the ice first this morning, according to Lysowski, meaning he will likely start his second consecutive game. Krueger, however, wouldn’t confirm tonight’s goalie.

Update: The Sabres have recalled goalie Jonas Johansson from the taxi squad because Ullmark is unavailable tonight for personal reasons, the team announced.

The Sabres also play the Flyers on Tuesday. Krueger recently said the Sabres would likely split their back-to-back games between their goalies this season.

So does that mean Carter Hutton will start Tuesday? Not quite.

“I can tell you – and really honestly – we made a decision truly go day by day now,” Krueger said on a Zoom call. “No plan for tomorrow in place until tonight’s game is over and so on. So that will not necessarily always be both goalies playing.”