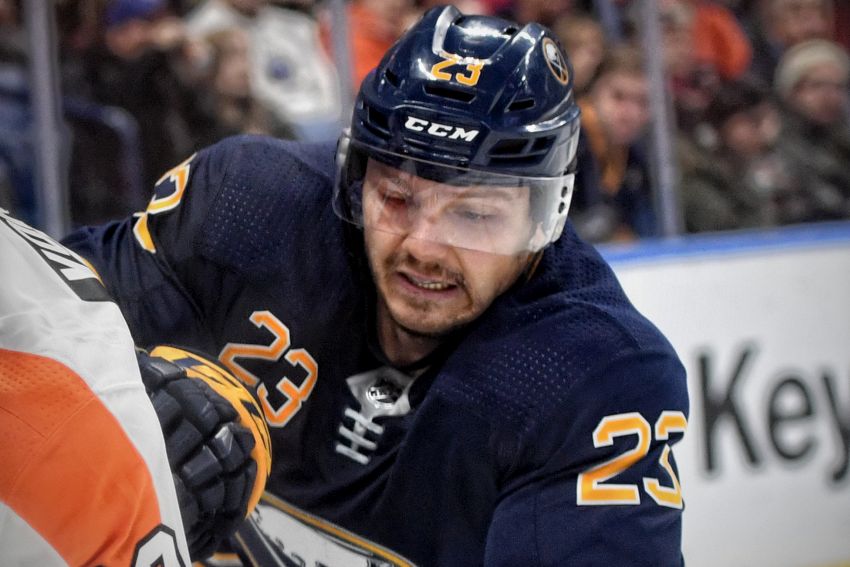 BUFFALO – Sam Reinhart is no speedster. The Sabres winger is usually at his best around the crease, tipping pucks and creating offense.

So it’s hardly surprising getting to the net has buoyed Reinhart’s offensive burst. He scored a power-play goal in front of goalie Kari Lehtonen 8:54 into the second period of Saturday afternoon’s ugly 7-1 loss to the Dallas Stars inside KeyBank Center.

The former second overall pick also consistently worked his way to the net in Thursday’s 4-3 road loss to the New York Rangers, a game he registered two assists.

Perhaps a solid two outings can ignite Reinhart, who has endured a rough season.

“That’s been my mentality all year,” Reinhart, 22, said of getting to the net. “I actually think I’ve felt, over last two games especially, I’ve been better away from it as well. Maybe that’s led to a couple more bounces for me.

“I think I’ve been there. It’s just a matter finding the puck and vice versa, the puck’s going to find me. So I’m going to keep going there.”

Reinhart, who ended a five-game goal drought, has compiled eight goals and 16 points in 46 contests this season.

The Sabres missed their first opportunity to win the 1,000th home game in their 47-year history. They get their next chance Jan. 30 against the New Jersey Devils.

So how did the Sabres earn their first home victory Oct. 23, 1970 over the Detroit Red Wings at Memorial Auditorium?

Ron Anderson scored the short-handed winner with 6:20 left in the third period. Cliff Schmautz tied the game earlier in the period.

“I like the way he played,” Sabres coach Phil Housley said of Nelson’s effort in New York. “He tried to get up in the rush a couple times. He’s just got to build off that, it was a tough start for him taking that penalty, I think he got backed off on his heels a little bit, first game in big stage like that (Madison Square Garden).”

Defenseman Victor Antipin, who recently battled the flu, was scratched for the 12th straight game.

Old Sabres foe Jason Spezza, one of the Senators’ stars during the heyday of the fierce Buffalo-Ottawa post-lockout rivalry, has started graying a bit with the Stars.

Following a 50-point season a year ago, Spezza, 34, has 20 points this season, his fourth in Dallas.

But Spezza has responded since getting scratched Monday. The center scored twice Tuesday and added two assists Saturday.

In an effort to spark the Sabres, winger Jordan Nolan fought Stars rookie Dillon Heatherington in the second period.