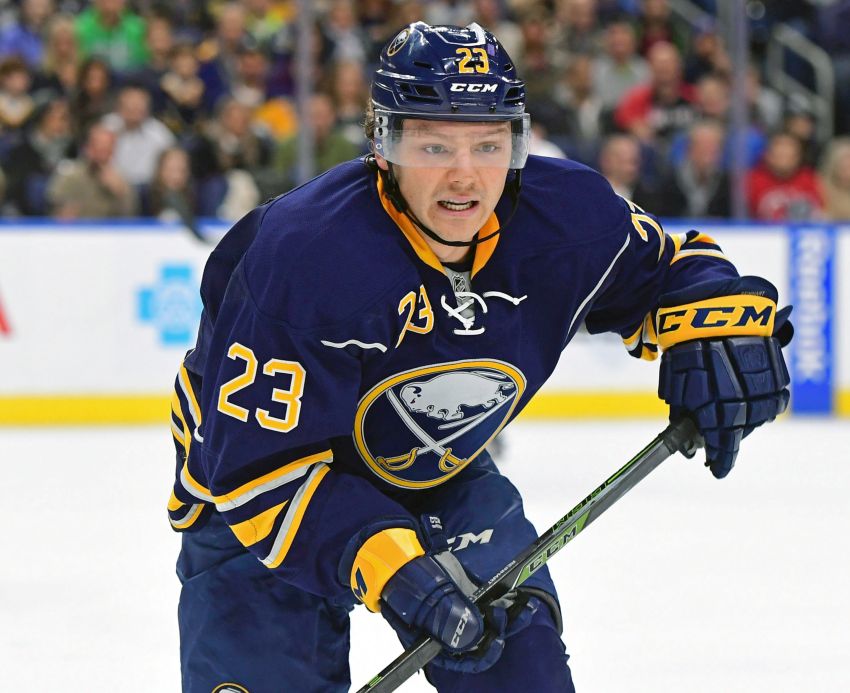 BUFFALO – Sabres winger Sam Reinhart said a “mistake” – he misread a text and missed a team stretch – caused him to get benched for Tuesday’s 3-1 loss in Columbus.

“It was 10:30, I thought it was 11,” Reinhart said this afternoon following practice inside KeyBank Center. “I was just sitting in my bed waiting to go down for breakfast.”

Still, the damage was done. Sabres coach Dan Bylsma couldn’t scratch Reinhart outright because winger Kyle Okposo was sick and he needed to dress a full lineup. So Reinhart sat on the bench all 60 minutes.

“It was a tough one to swallow,” Reinhart said. “I feel I’ve been a pretty good team guy the last two years.”

“It was just tightened to be exact words for this circumstance,” Bylsma said. “That was 24 hours before Columbus morning.”

Earlier in the season, for example, Bylsma removed center Jack Eichel from the power play for part of a game because he was late for a meeting.

“A couple of circumstances had come up before,” Bylsma said.

Now, nothing will be tolerated.

Did Reinhart try to convince Bylsma and Murray to let him play?

“A little bit,” he said. “I wanted to let them know (expletive) happens. Sorry to swear. I didn’t sleep in. … I misread a text.”

“I would’ve rather battled it out with my teammates,” he said. “I don’t think five minutes in the morning is going to influence my preparation for a game. It was a team stretch and it was my job to be there on time.”

Reinhart said he tried to stay in the game by helping his teammates. He sat with the defensemen for the first and third periods.

“He was disappointed and, yeah, I’d say angry at what transpired in Columbus, as he should be,” Bylsma said. “He shouldn’t be happy with it. But going forward, it’s no different with the rest of the guys.”

Check back later for a full story on newcomer C.J. Smith, who signed a two-year, entry-level deal today after leaving UMass Lowell. The forward practiced with his new teammates.

“It’s a fresh, young-looking face in that helmet,” Bylsma said. “C.J.’s coming with speed and skill, with some jump in his game and has demonstrated that with UMass Lowell, especially this year. But (125) points in 120 college games is pretty impressive.”

Sabres defenseman Cody Franson (lower body) practiced Thursday for the first time since getting injured March 17. Franson said he could play Sunday when the Sabres host the New York Islanders.

Franson said he was hit into a wall and essentially hyperextended a joint.