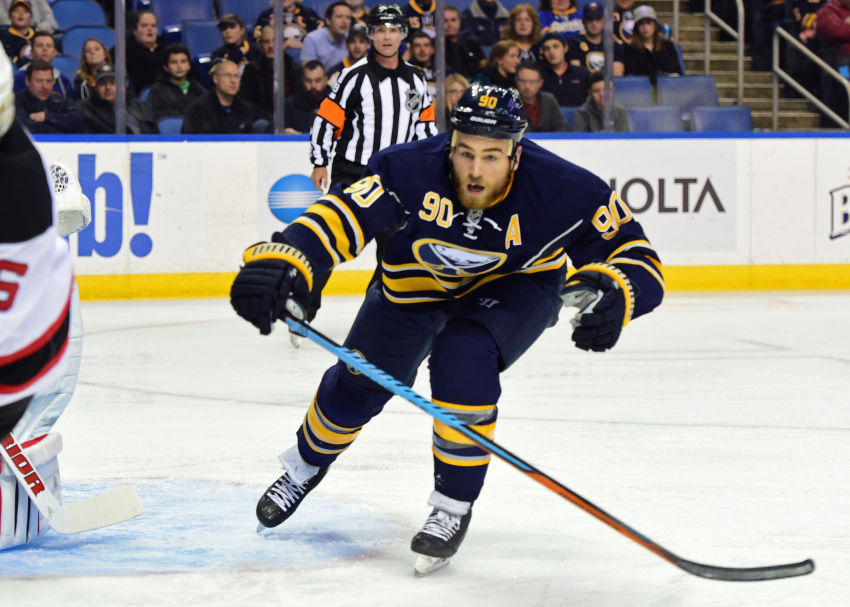 Ryan O'Reilly was on the ice for every goal in the game Saturday. ©2015, Dan Hickling, Olean Times Herald

BUFFALO – The scene repeats itself after nearly every Sabres loss.

Inevitably, center Ryan O’Reilly will face a hoard of cameras in the dressing room, lament his miscues and take some responsibility for the defeat.

“It’s something I like about myself,” O’Reilly said about pressure Saturday prior to scoring a goal and two assists in the Sabres’ 4-3 loss to the New Jersey Devils. “I think I have to be that way. … Whether it’s practice or a game day, it pushes me to be a better player.”

The three-point outing offered O’Reilly, who was on the ice for every New Jersey goal, little solace.

“I let the team down there,” he said following the game inside the First Niagara Center.

After Montreal drubbed the Sabres 7-2 on Friday, O’Reilly said he had to “look at himself” because the Canadiens scored two goals directly off faceoffs he lost. Never mind the goal he scored. Following the Sabres’ 3-1 loss to Ottawa on Oct. 8, O’Reilly called himself “pretty useless” and said he felt he “was skating around.”

Is O’Reilly, who signed a seven-year, $52.5 million contract extension July 3, taking the losses too hard?

“I don’t think he’s putting too much pressure on himself,” Sabres coach Dan Bylsma said. “I think he’s taking accountability for our play and his play, and I like that. I know he knows and thinks he could do more for us, and I think he will.”

Bylsma has leaned on O’Reilly heavily, skating him 20 minutes, 46 seconds a game – the NHL’s fourth-highest average among forwards entering Saturday. The biggest piece in the June 26 blockbuster deal with Colorado began has three goals and seven points in eight games. Despite two key losses Friday, he ranked 15th in the NHL in faceoff percentage (57.7) before the game.

Sometimes, O’Reilly said, he puts more pressure on himself during a game.

“(If) I’m feeling the puck well and we don’t get on the board early and get down one … I start to get more tight,” he said. “It’s obviously something I’m learning. I have to maintain that pressure and mindset of just play, if I keep getting the chances, eventually they’re going to go in.”

To O’Reilly, that’s playing in the “present.”

“I see we’re down by a couple of goals and say, ‘OK, I got to get back and give us a chance’ instead just playing and enjoying the excitement of the game,” he said.

Zemgus Girgensons is the Sabres’ only pointless forward who has played all eight games. Of course, almost every established Sabres scorer is struggling offensively.

“He’s had three or four golden opportunities we all kind of look at and say, ‘Shoot, that could’ve been, should’ve been, probably was going to be (a goal),’” Bylsma said.

“Definitely it’s frustrating,” Girgensons said. “Every year you go through some highs and lows. The past few games I’ve had a decent amount of chances to pretty much easily put the puck in. They just haven’t gone my way. It’s just up to me to prepare mentally a little bit more, just bury those chances. It’s seven games now, so it’s time to start doing something.”