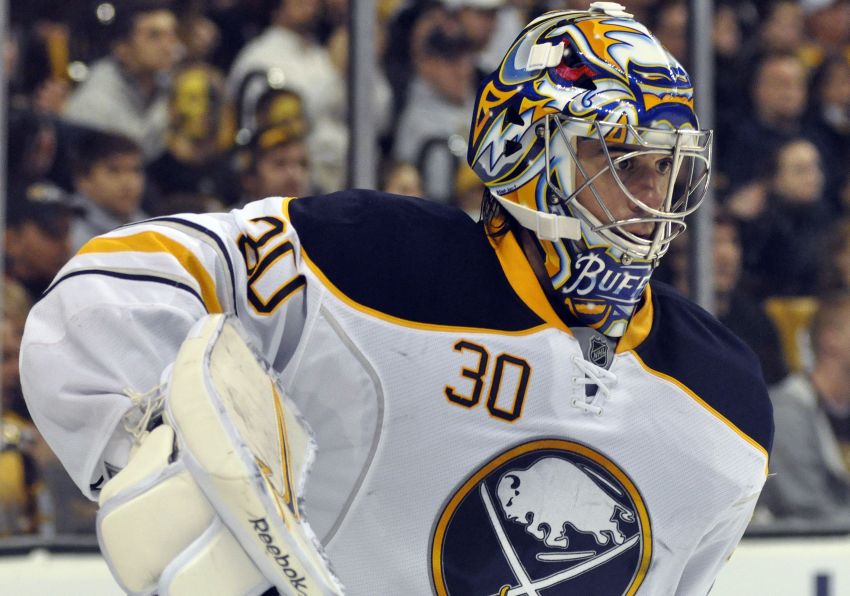 BUFFALO – If you’ve spent any time following Ryan Miller’s career, then you’re aware the Sabres goalie might be the NHL’s most passionate player.

Miller says whatever he thinks, a rarity in sports today. Sometimes he’s lauded for it. Other times he’s flayed for it.

But he’ll stand up for whatever he believes is right.

So it’s hardly surprising details are emerging that Miller, one of the 18 or so players negotiating with owners in New York trying to end the 82-day NHL lockout, became emotional during some heated collective bargaining talks Wednesday.

From the Toronto Star: “Earlier, Buffalo Sabres goalie Ryan Miller had angrily vented when the owners said they were disappointed with the players’ responses to an earlier offer and threatened to pull everything off the table.”

From Sportnet: “It was Buffalo Sabres goalie Ryan Miller who lost his temper briefly, which seemed to encourage further dialogue.”

Before the lockout began in September, Miller questioned why NHL commissioner Gary Bettman still had a job. He later called the comments “tongue-in-cheek,” although he never really backed away from them.

“If he’s really doing what he says he’s doing, why is he still employed?” Miller said Sept. 14 inside the Northtown Center. “Our case is he’s doing what the owners want him to do. The league is healthy. The league makes money. There are definitely teams that need help, and we feel we came up with a way to assist them in doing that.

The 32-year-old began displaying his emotions just a handful of games into his career. Back in 2003, when Miller was a neophyte netminder on a bad Sabres team, he nearly broke down after a couple of wretched losses. Once, he was so angry with his play, he refused questions from reporters and instead issued a statement.

Consider what Miller has said just in the last year or so:

November 7, 2011, after rookie backup Jhonas Enroth had briefly pushed a slumping Miller out of the lineup:

“But I want to be called upon. I’m working, getting myself ready to play. I don’t want things to get mixed up. I’m here to win. That’s the emotion you get from me. If I’m discouraged and if I’m (ticked) off, that’s just how it is.

“I just stuck around because I want to say what a piece of (expletive) I think Lucic is. Fifty pounds on me, and he runs me like that? That’s unbelievable. Everyone in this city sees him as a big, tough, solid player. I respected him for how hard he played. That was gutless, gutless. Piece of (expletive).”

November 30, 2011, when rumors had been swirling the Sabres planned to deal a struggling Miller:

Jan. 16, on if a trade would help the slumping team after Detroit had pummeled Miller and the Sabres:

“There’s not ever going to be a trade in the history of the NHL that’s going to affect anything like that. There’s no chance anybody comes into this team and just shake it up or we can even move multiple players and get any kind of return. … If you want to destroy a team and just go out and be reckless and do something, yeah.”

“A pretty tough day. I’m not going to lie. I’m not real happy about the way it all turned out. But that’s the business of hockey.”