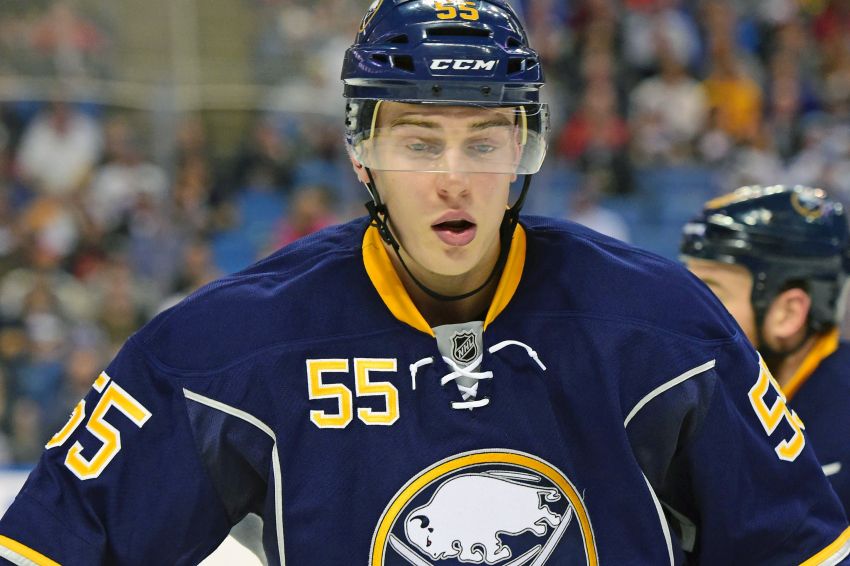 BUFFALO – Just hours before his roster must be finalized, Sabres coach Dan Bylsma called it a “moving puzzle.”

Four regulars are either injured or just returning from ailments. His best defenseman, Rasmus Ristolainen, has left the team because he doesn’t have a contract. He was practicing as what his agent called a “goodwill” gesture.

Bylsma must make some decisions before 5 p.m., when he must have his 23-man roster set for Thursday’s opener against the Montreal Canadiens.

Still, with Ristolainen, a restricted free agent, gone for now, rookie Brendan Guhle, 19, has possibly made the team out of camp.

Update: Guhle has been returned to junior.

Meanwhile, center Ryan O’Reilly (back/midsection spasms) and winger Kyle Okposo (bruised knee) skated on their own before practice. O’Reilly then joined his teammates for some special teams work.

“(This) is something he’s felt before,” Bylsma said this afternoon following practice inside KeyBank Center. “What happened in the game with the first faceoff and the second faceoff was a little bit different than he felt before. One of the concerns is it’s something you deal with every second when you’re on the ice, exasperated when you’re taking a draw and you’re locking horns with another guy. It’s safe to say that we won’t see him take another faceoff for a few days, for sure.”

O’Reilly doesn’t want to rush himself back. The NHL All-Star said he wants to have a normal practice Wednesday.

For now, rookie wingers Hudson Fasching and Alexander Nylander, the eighth overall pick, are still with the Sabres. Both can be assigned to the AHL Rochester Americans.

Update: The Sabres have sent Nylander, forwards Nick Baptiste and Dan Catenacci and defenseman Justin Falk to the AHL.

Guhle can’t be sent to the minors. It’s either the NHL or the junior Western Hockey League for the 2015 second-round pick.

Bylsma said if the Sabres send Guhle back to the Prince Albert Raiders, he can’t return this season.

“So we’ll go the distance with keeping him around,” Bylsma said. “I think he’s shown quite a bit in the last couple games he’s played that he can play in an NHL game.”

Guhle turned heads last season and was expected to compete for a roster spot this year. The Sabres begin a four-game road trip after the opener. Expect the youngster to accompany them, perhaps as the seventh defenseman.

One thought on “Sabres roster still not set; Brendan Guhle likely to stick”