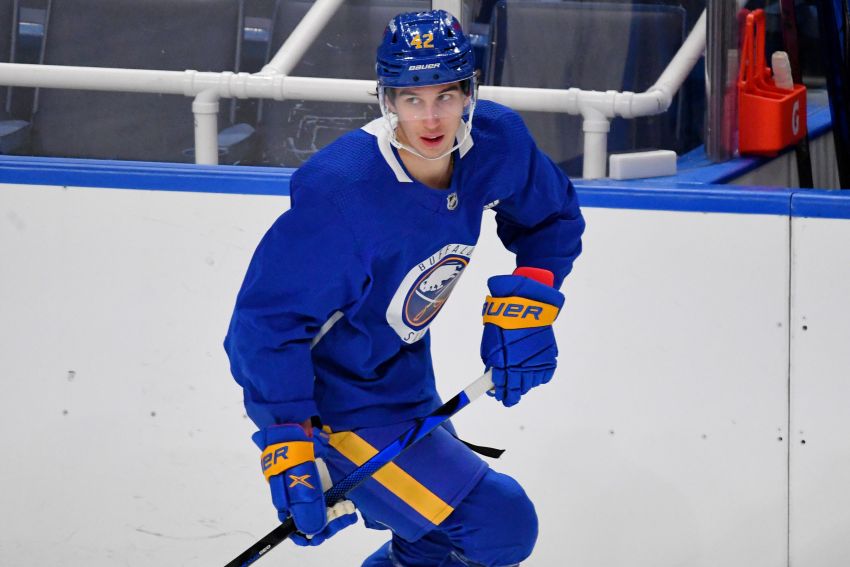 BUFFALO – The 27 players who participated in Tuesday’s practice will start the season on the Sabres’ roster or taxi squad, coach Ralph Krueger said.

Of course, the Sabres must sort some things out before Thursday’s opener against the Washington Capitals at KeyBank Center.

“We do need to keep some options open, but we are optimistic about the way the lines have evolved,” Krueger said on Zoom call early Tuesday afternoon.

NHL teams had to submit their roster and four- to six-man taxi squad by 5 p.m. Tuesday.

“Eakin, Eichel and when you look at Staal, those groups are clearly feeling synergy with each other,” Krueger said. “We see some offensive upside with all the lines.”

At the end of Tuesday’s practice, Krueger chatted with Cozens, who arrived in Buffalo last week after earning a silver medal with Team Canada at the World Junior Championship.

“Just catching up with him, really, on the adventure he had already with Canada in a leadership role and now what’s it’s like being a young guy on the squad, being with the guys that he’s actually trying to grow up to and learn to,” Krueger said. “So he goes from being a teacher to being a pupil in a short period of time. …

“He’s in a good space, he’s got a lot of confidence, he’s looking good on the ice, he’s game-shape ready and we’ll just take our time with how we take him to the next step. For 18 months (since he was drafted), he’s done the job we’ve asked for. Now he’s a Sabre full on and for a long time to come.”

Cozens knows he could make his NHL debut later this week.

“The biggest thing for me is to be ready whenever they want me to play … it could be any day,” he said.

– Matt Irwin and Will Borgen (Brandon Davidson skated as an extra)

Krueger said the Sabres plan to start with a six-man taxi squad. The NHL implemented the new practice roster because of the COVID-19 pandemic.

The Rochester Americans open training camp Friday but the AHL season doesn’t start until Feb. 5. When the Amerks begin playing, taxi-squad players could be sent down to receive game action to keep from getting “stale,” Krueger said.

“We need to monitor that every single day,” he said.

Players in Rochester, according to Krueger, can be recalled on the day of home games before 5 p.m. The Sabres, however, can’t summon any players on the road.

“The group we take on the road, that’s it,” he said. “So we’re going for four games on the road, we need to decide before that trip who do we need for the whole stretch? And then we cannot call up from Rochester in that stretch.

“So the taxi squad will have a different meaning to it at home than on the road. … It’s a new world for us.”