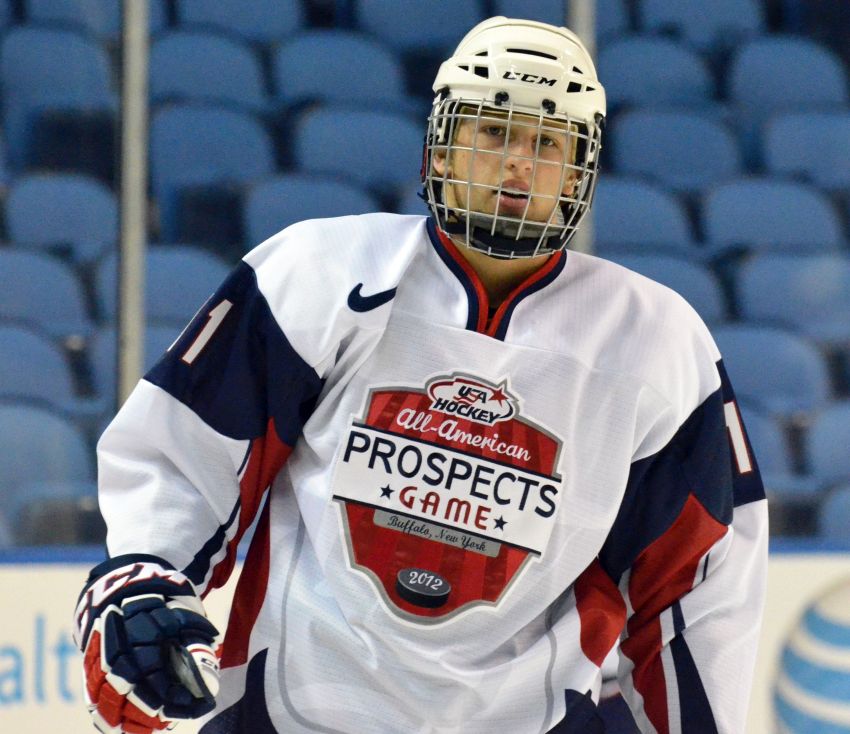 Hudson Fasching made an appearance at the First Niagara Center in 2012 at the All-American Prospects Game. ©2016, Dan Hickling, Olean Times Herald

“I think they’re kind of ready if they get the call,” Fasching said this afternoon inside the First Niagara Center.

Minutes after Fasching spoke, following a chat with Sabres coach Dan Bylsma, he likely called his parents to tell them he would be making his NHL debut Saturday afternoon when the Sabres host the Winnipeg Jets.

“I asked Hudson if we needed to get his parents here for tomorrow,” Bylsma said. “He’s like, ‘Yeah, we do.’”

Fasching’s debut has been highly anticipated in these parts for a long time. He just finished a stellar career at the University of Minnesota, scoring 20 goals in his junior season.

The 6-foot-2, 216-pound power forward will start Saturday on the right wing beside center David Legwand and Matt Moulson. Fasching could also move around, Bylsma said.

“I think the big thing to see will be adjustment to the pace and the speed,” Bylsma said. “He’s a good skater, but I think the pace is going to be an adjustment for him. I think at his best he’s going to see a big-bodied guy, a physical guy, a power forward type of guy around the net.”

Nelson, a free agent from Minnesota State University, will skate on the right side beside Mark Pysyk, Bylsma said.

To make room for the rookies, forward Cal O’Reilly and defenseman Carlo Colaiacovo will be scratched, Bylsma said. Chad Johnson will start in goal.

In other news, rookie goalie Jason Kasdorf (groin) had his first on-ice session today with goalie coach Andrew Allen before his teammates practiced.

Update: The Sabres have signed forward Eric Cornel, the 44th overall pick in 2014, to an entry-level contract, the team announced this afternoon.

Cornell, 19, compiled 27 goals, 56 assists, 83 points and a plus-19 rating in 68 games with the Ontario Hockey League’s Peterborough Petes this season, all career highs.