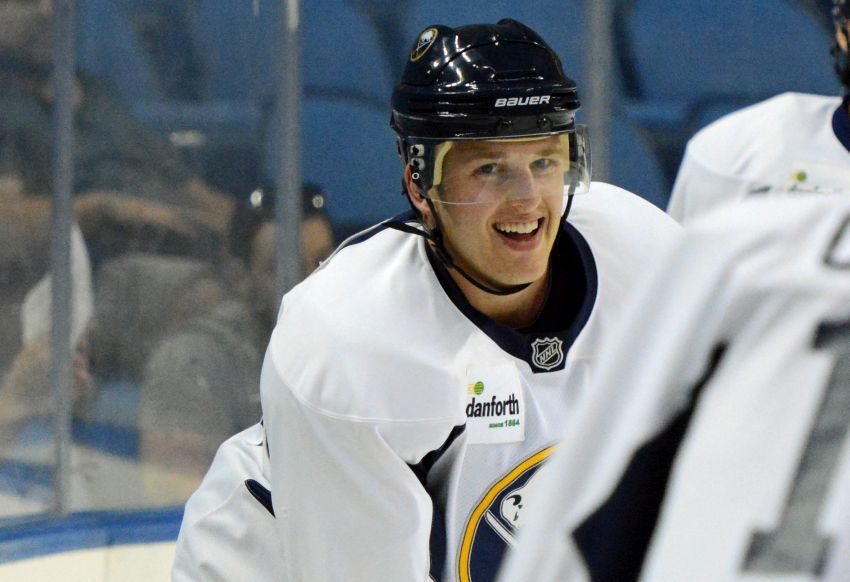 BUFFALO – Hudson Fasching, of course, was supposed to crack the NHL. The Sabres rookie developed rapidly at the University of Minnesota, becoming one of the NCAA’s best power forwards by his junior season.

A year ago, Fasching, 20, decided he would turn pro following his third year.

But defenseman Casey Nelson, who debuted at practice with Fasching on Thursday, experienced a tougher route to the Sabres. The undrafted Nelson, 23, is a self-proclaimed “late bloomer.” He struggled early on at Minnesota State University.

After developing into an NHL prospect, Nelson decided around Christmastime he wanted to return for his senior season. About a month ago, he changed his mind and found several teams interested in his services as a free agent.

Fasching has been heralded as the Sabres’ top college prospect. The winger’s stock skyrocketed after Los Angeles drafted him 118th overall in 2013 and the Sabres acquired him months later.

It wasn’t a matter of if, but when he would join the Sabres.

Nelson was a virtual unknown until word recently began spreading about a sturdy college defenseman teams were courting.

Sure, no one knew much about Nelson, but he didn’t know anything about the Sabres, either.

“I didn’t know how to spell ‘Sabres’ right away,” Nelson said following practice inside the First Niagara Center. “I had to look it up.”

Both American prospects signed entry-level contracts earlier this week and will likely stay with the Sabres for the final eight games.

Sabres coach Dan Bylsma wanted to wait another day before saying if they would play Saturday afternoon against the Winnipeg Jets. Bylsma said it’s easier to jump in as a winger, although he cautioned one player isn’t ahead of the other.

Clearly, Fasching and Nelson felt nervous practicing with their new teammates for the first time.

An excited Fasching added: “It was really exciting, a little bit of nerves out there. But all in all, just a fun day.”

“I’ve been learning systems rapidly over the last couple days here,” said Fasching, who was given No. 52.

The 6-foot-2, 216-pound Fasching just scored a career-high 20 goals and 38 points in 37 games. He said his junior season helped him develop consistency, a new scoring touch and leadership skills.

“I just felt I was ready,” Fasching said. “I had got a lot out of college hockey. I think from a development perspective, making the jump was the best for me to develop my game.”

Bylsma expects Fasching to play that same hard style – “See that power forward,” he said – in the NHL.

“I think he can skate and can get up and down the ice and … be a factor around the net,” Bylsma said.

Meanwhile, the last several days have been a whirlwind for Nelson, who picked the Sabres on Sunday before officially signing a one-year deal Tuesday worth $925,000, according to generalfanager.com.

What drew Nelson to the Sabres? He said he saw an opportunity on the depth chart, liked the coaching staff and loves Buffalo, where he once played in a tournament. Remember, the Sabres don’t have a young defenseman in the system ready to graduate from the AHL.

So how did the 6-foot-2, 182-pound Nelson go from an unknown into a sought-after prospect? Some very rapid development.

Nelson was so raw defensively he was scratched as a freshman. He quickly improved, however.

Nelson’s biggest asset is skating, which has already impressed Bylsma, who liked the way he moved confidently.

By Sunday, after whittling his list of suitors down, Nelson’s agent called and told him he would be signing with Buffalo. The phone rang again shortly after. Nelson had to pack his bags and leave for the airport in 90 minutes.

“It moved really quick,” he said.

Fasching skated on the right wing beside center David Legwand and Matt Moulson on Thursday. Nelson skated beside Carlo Colaiacovo.