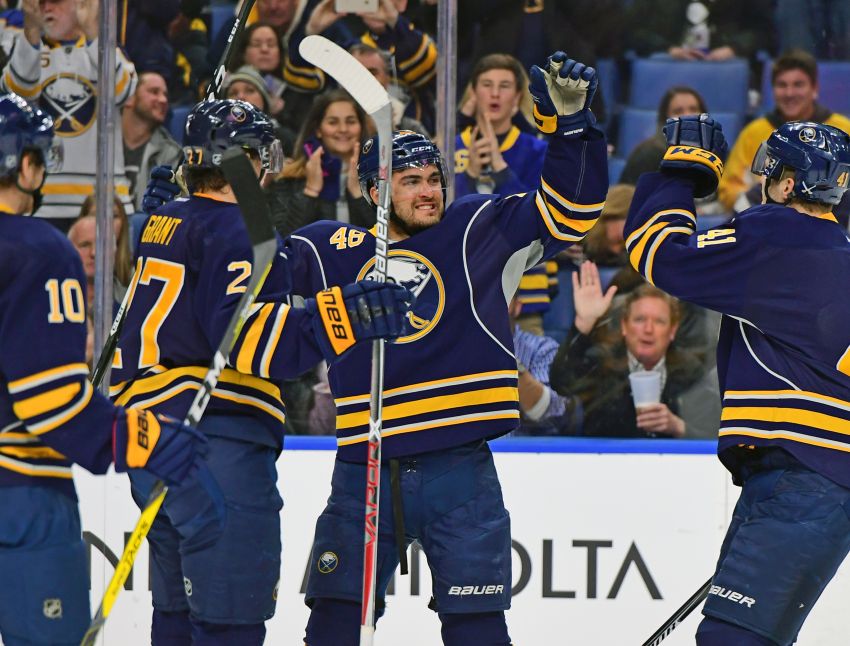 “He’s just going, head down, bruising the way for those guys to get pucks and play with that puck,” Sabres coach Dan Bylsma said.

That means goals haven’t been priority for the 6-foot-2, 212-pound Carrier, who has scored just once in his first 17 NHL games.

“That’s not his focus and I don’t think it will be going forward,” Bylsma said.

Carrier has consistently received ice time by being a speedy, tough presence who often ends up in the goalie’s face.

“He brings the energy,” O’Reilly said. “No matter what shift it is, even if we’re not scoring, if we’re not creating, he’s doing something, he’s being physical. Their D are worried about him coming down because he’s so intense.”

While his name is often overlooked, Carrier, 21, has morphed into one of the Sabres’ top forward prospects. Before a broken hand ended his season in March, he nearly earned his first recall in the midst of a torrid stretch.

The Sabres summoned youngsters Justin Bailey and Nick Baptiste from the Rochester Americans ahead of Carrier this season. They finally recalled Carrier on Nov. 4, and the former second-round pick has quickly become a regular, often skating beside O’Reilly, the No. 1 center.

“I got called up, it was supposed to be a couple days, that trip to Ottawa,” Carrier said. “I’ve been here a month now. It’s been fun.”

Carrier mostly skated on the fourth line early. Bylsma recently promoted him to the left wing beside O’Reilly and Kyle Okposo.

“You never expect to play on the first line, especially coming in from the ‘A,’” said Carrier, who occasionally moves back to the fourth line.

“(He) hasn’t gone out and tried to play fancy with those guys or make passes,” Bylsma said. “He’s just had a real workmanlike focus.”

Carrier added: “Speed, hitting guys, getting the puck back, trying to make plays. I think that’s all he wants me to do with those guys.”

Like most notable prospects, Carrier scored throughout his junior and AHL career. He had 13 goals and 30 points in 56 AHL appearances last season, including nine goals and 20 points in a 21-game run.

But he has no problem utilizing his talents for others in the NHL.

Carrier’s spot on a top line illustrates some of the Sabres’ problems, though. Their offense is still ranked 30th, so Bylsma is trying anything – even putting a neophyte with one goal beside two top forwards – to create goals.

“A little shakeup in the line combinations,” Bylsma said.