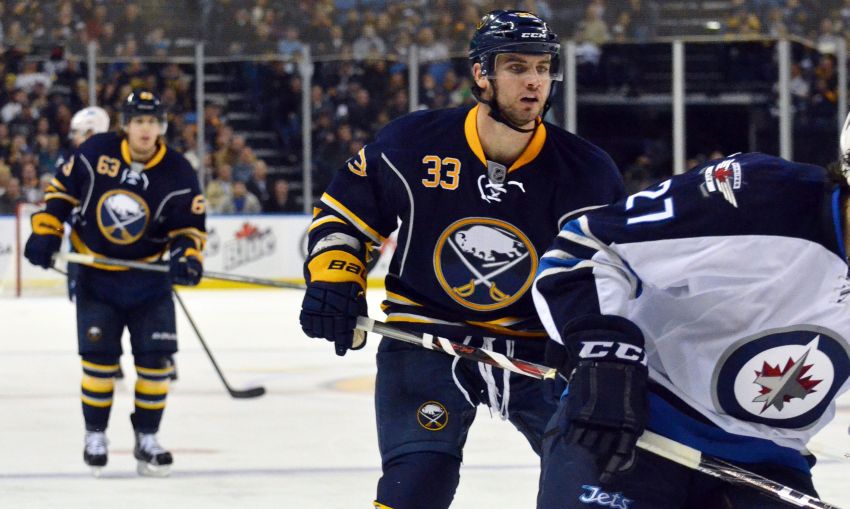 The 32-year-old, a veteran of 602 NHL games, probably felt even worse Tuesday morning.

For Lindy Ruff, leaving Dupuis wide open in the right circle, something Leopold called an “easy read,” was the last straw. The Sabres coach scratched Leopold for the Sabres’ ugly 2-1 loss to the Winnipeg Jets inside the First Niagara Center.

“I didn’t have a real good day because I know we could’ve easily won that game,” Leopold said about the Sabres’ 4-3 loss to Pittsburgh. “I’ve played a lot of games in the league. … That’s a blown coverage. Of course, you say it’s a five-man group. But that’s a pretty easy read for me and didn’t end up making it. That’s not the first time this year. It’s happened a couple times.”

Leopold, a team-worst minus-7 before the game, handled his benching well, admitting he hasn’t “got off to a good start.” He managed to keep his sense of humor, though.

When he began taking off his equipment following a long skate Tuesday morning and noticed a few reporters waiting to chat with him, he joked, “You guys smell blood or what?”

“I’m trying to get my confidence up, trying to get into plays,” Leopold said. “ … It’s the little things, not really the big things that have been getting me a little bit this year. But it’s not the first time I’ve ever sat and watched a game. You learn from it and it creates a fire underneath you and urges you to get better.”

Ruff said he spoke to Leopold about improving his play three or four games ago.

“I thought we got a couple pretty strong games,” Ruff said. “But last game, I expect more out of a veteran defenseman. He’s going to have to work hard to get back in now.”

Leopold said losing his consistency has made him hesitant and forced him into making the wrong plays.

“I’ve looked at my game tapes,” said Leopold, who had never been scratched in his three seasons here. “It comes down to confidence at times. It comes down to making reads and being aware. I just haven’t done a good enough job of it.”

“Lindy’s got to make his choice with lineup,” Leopold said. “We’ve got eight D here. Sometimes you find yourself out. I hate to say it. It’s cliché. But you have to learn from it, you have to move on. You can’t look in the rearview mirror. You have to look forward.”

Brennan mostly played with Weber and anchored a point on the power play beside Jason Pominville while skating 17:08.

The coach, however, has heard about how a disgusted Miller cursed three times during his brief chat with the media. He loves the passion his franchise goalie showcased.

“When you start holding yourself accountable inside the room, you’ve almost got your team in the right place,” Ruff said. “A room without confrontation, a room without holding each other accountable, you’ve got a lot of places to hide.

Ruff on one-goal scorer Drew Stafford, who started the game on the fourth line with Cody McCormick and John Scott: “There’s an inside part to his game that’s getting a little bit better. When he’s going well, you noticed his skating, you notice the winning of the majority of the one-on-one battles.

“When it isn’t going well, we’re not winning those battles. I didn’t think he was quite up to speed with his skating the other night and lost on some battles that I thought were key battles inside the game. It’s something that we’ve talked about.

Stafford went back up beside Tyler Ennis and Marcus Foligno later.

Former Sabres farmhand Mathieu Darche, who scored 31 goals with Portland in 2008-09, retired from the NHL on Tuesday after 250 games. The winger had been skating with New Jersey but didn’t have a contract.