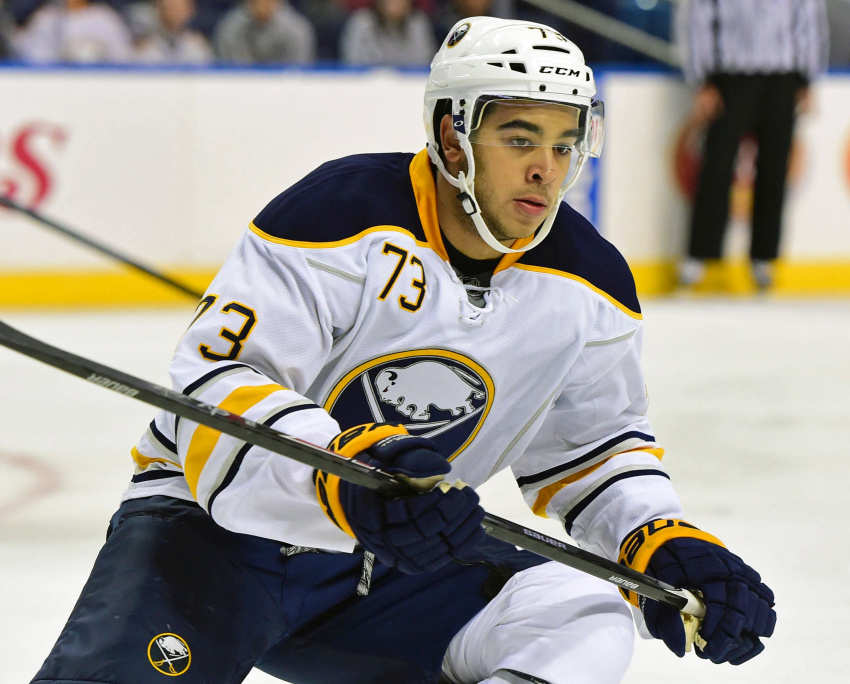 OTTAWA – As a native of nearby Barrhaven, about a 10-minute drive from the Canadian Tire Centre, Buffalo Sabres rookie Nick Baptiste had quite the cheering section for his sixth NHL game.

“There’s going to be a lot of people here tonight – a lot of family, friends, teachers, people in the area,” Baptiste said prior to Saturday’s 2-1 comeback win against the Senators, his first NHL appearance here. “My brother’s whole hockey team is coming. There’s going to be quite a bit of people. I got to try to channel as much as I can and just play.”

Baptiste, 21, has acclimated well to the NHL. The speedy winger has been noticeable at times, consistently earning more ice time. Sabres coach Dan Bylsma even briefly promoted him to the top line beside center Ryan O’Reilly and Kyle Okposo in Thursday’s 2-1 loss to Toronto.

“I feel a little bit of confidence,” said Baptiste, who compiled three goals and five points in five AHL games following a strong NHL training camp. “When you get more minutes and you get out there with guys like that, it kind of jumpstarts you a little bit.”

Bylsma said: “He’s going to get those opportunities … (with) how he can force opposition with his speed.”

Baptiste, a 2013 third-round pick, started Saturday on the right side with center Derek Grant and William Carrier, 21, who made his NHL debut.

Baptiste said he had previously played at the Canadian Tire Centre in an Ontario Hockey League game. He also won the Bell Capital Cup, a national youth tournament, here about nine years ago.

While the Senators consistently enjoyed success not long ago, Baptiste said he “wasn’t a humongous Sens fan.”

“I watched the Sens play because they were the team here, but there was no one really I looked up to too much back in the day,” he said.

Instead of a local player, Baptiste looked up to former Toronto Maple Leafs star Mats Sundin and Jarome Iginla, a 19-year veteran who plays for the Colorado Avalanche.

It was almost a year ago, around the time, not coincidentally, Marcus Foligno began the most consistent stretch of his career, that the Sabres winger finally developed a shoot-first mentality.

These days, Foligno’s consistently shooting the puck. No, he’s not exactly Alex Ovechkin. Still, Foligno had 13 shots in 10 games entering Saturday’s game. He had four shots in Thursday’s 2-1 loss to Toronto, scoring the Sabres’ only goal.

Bylsma urged the 6-foot-3, 228-pound Foligno to utilize his underrated shot last season. When Foligno gets off his game, Bylsma said, he “tends to fight” the shoot-first mentality.

Pittsburgh claimed him on waivers from the Canadiens on Oct. 11. He played 20 minutes for the Penguins before they traded him to the Senators on Wednesday.

Condon posted a 27-save shutout Thursday after flying in from California.