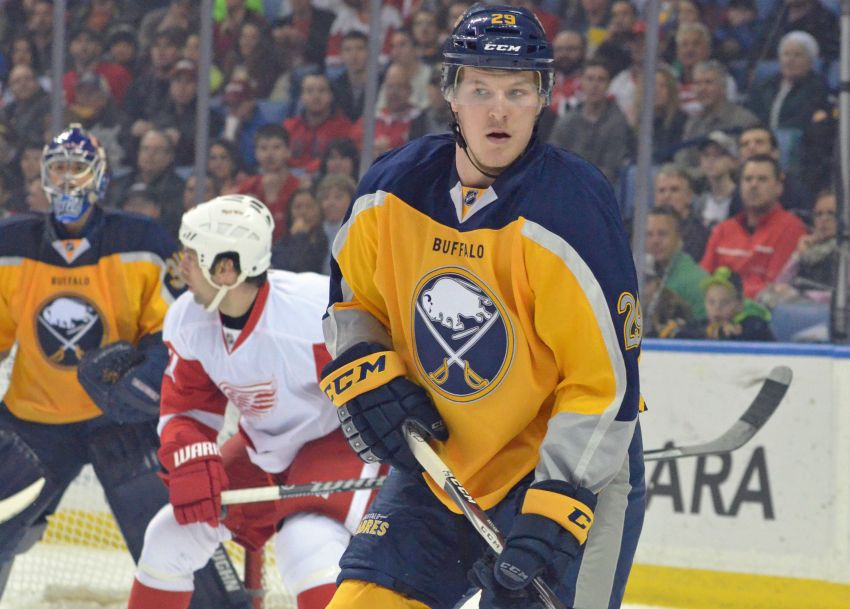 BUFFALO – Instead of playing his fifth NHL game Thursday in New York, Sabres defenseman Jake McCabe figured he’d be 100 miles away in Philadelphia, at the Frozen Four with the University of Wisconsin.

“I wasn’t expecting to be done that early,” McCabe, whose Badgers were eliminated March 28, said Wednesday inside the First Niagara Center.

But the 20-year-old junior had a nice consolation prize waiting after the surprising exit from the NCAA Tournament, a three-year, entry-level NHL contract he signed last Wednesday.

McCabe has already played in Philadelphia, a 5-2 loss to the Flyers on Sunday.

“I wanted to play there for the Frozen Four, but I was playing there against the Flyers,” he said. “It’s been an awesome year. To end my year in the NHL getting my feet wet a little bit, seeing what it takes to be up here, it’s been a great year.”

McCabe, the 44th pick in 2012, said the last week has been the craziest of his life.

Leaving Wisconsin with eligibility wasn’t easy. He’s from Eau Claire, about three hours away from the Madison campus. He called his three years there the best of his life.

But with senior teammates – his “best buddies” – leaving school, McCabe figured he should turn professional. He spoke to a supportive Badgers coach Mike Eaves about an hour last week.

Then McCabe, a personal finance major, quickly left campus. He said his professors will let him finish his work later.

“When I figured out I was signing, I shipped out that night, threw everything in a bag,” he said. “Got to Buffalo, then a couple hours here with physicals then hopped on the team plane to St. Louis.”

The rookie debuted against the Blues last Thursday, skating 16:20 in a 2-1 loss.

Playing against Team USA Olympians David Backes and T.J. Oshie provided McCabe, who captained the U.S. world junior squad in 2013, the first of some welcome-to-the-NHL moments.

“(You’re) watching Backes and Oshie in the Olympics and next thing you know you’re taking line rushes and battling against them,” McCabe said. “The (Pavel) Datsyuk game, the first game at Detroit (Friday), that was definitely a wow factor, too.

“But other than that I think it’s kind of sunk in now and I’ve gotten more comfortable.”

McCabe has endured a tough acclimation to the NHL, playing his first four games against St. Louis, Detroit (twice) and Philadelphia.

“He has a lot of room for improvement to play at this level on a consistent basis,” Sabres coach Ted Nolan said. “But then again he’s young, played against some pretty good teams.”

Nolan noted McCabe forced the puck up the middle in Tuesday’s 4-2 loss to Detroit.

“(He) thought you could maybe push it out,” Nolan said. “In this league you can’t thought. You got to think. He’s learning under fire and he’s probably going to get better as we go, get the offseason conditioning. Now he has a good taste of what this league’s all about and how strong and how fast it really is.”