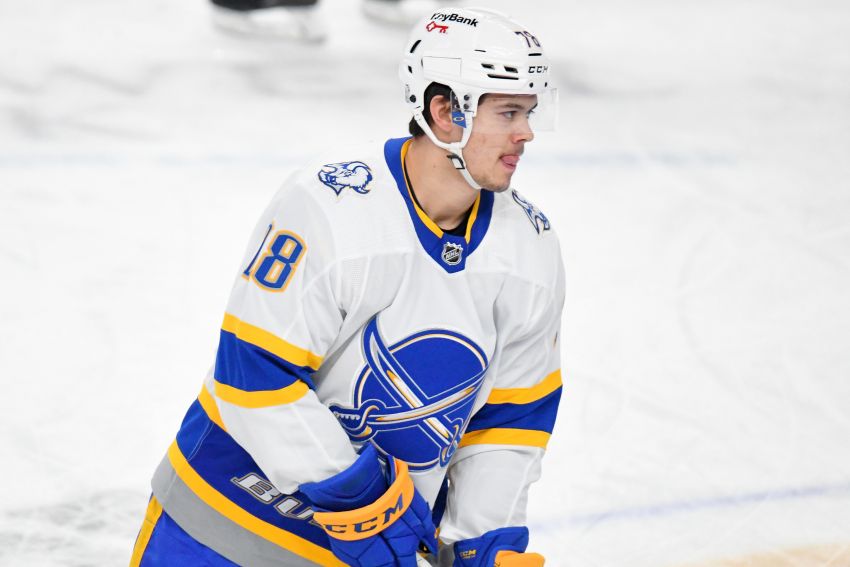 BUFFALO – In the second period of Tuesday’s 5-4 shootout loss, Sabres defenseman Jacob Bryson grabbed the puck along the left wall, skated behind his net and adroitly fed winger Victor Olofsson an outlet pass from the right circle.

A few seconds later, Bryson swooped into the Philadelphia Flyers zone, grabbed center Eric Staal’s pass high in the slot and backhanded the puck to Olofsson as he charged to the net.

While Olofsson did not score, the sequence illustrated Bryson’s slick playmaking ability, smarts and growing confidence. The rookie was playing just his eighth NHL game.

In what has become another awful season, Bryson, 23, has emerged as a bright spot for the hapless Sabres, showcasing poise that belies experience. He has quickly earned coach Ralph Krueger’s trust, playing more than 20 minutes in four of the last five games.

“What a great find for us now in this situation,” Krueger, whose Sabres have lost eight straight games, said on a Zoom call Friday.

Bryson will likely make his sixth straight appearance tonight for the Sabres, who host the Pittsburgh Penguins at KeyBank Center.

In Thursday’s 5-2 loss to the New York Islanders, Bryson skated a game-high 24 minutes, 10 seconds. In Saturday afternoon’s 5-2 defeat to the Islanders, he scored his first NHL goal.

“It’s been a journey and a long one,” Bryson said. “But I think I’m just getting better every game.”

Krueger said Bryson’s “poise when pressure is coming at him when he has the puck” has wowed him.

“Whether it’s on retrievals on our end, when he’s trying to solve pressure or when he’s at the blue line and he’s getting a winger closing on him extremely quickly, he’s so calm and cool,” he said. “He’s got his head up all the time and makes the right decision. We’re extremely pleased with his puck management. The same thing is going on without the puck. …

“It’s an extremely intelligent game that he’s shown us here.”

The Sabres recalled Bryson from the taxi squad Feb. 23 after defenseman Will Borgen broke his forearm and utilized him that night in their 4-1 win against the New Jersey Devils, their last victory.

Bryson knew with the team battling injuries and COVID-19 problems he could earn his first big league action. At that point, Borgen and defensemen Jake McCabe and Rasmus Ristolainen were all sidelined. A knee injury has ended McCabe’s season.

“I knew I was gonna potentially crack the lineup and I did and I thought I had a pretty good first game,” Bryson said. “I had no nerves and I was playing with confidence.”

Early in his debut, the 5-foot-9, 179-pound Providence College product joined the rush and hit the post. That play turned out to be a harbinger.

Right now, it will be hard for Krueger to yank Bryson from the lineup. He has been playing over established talent like Henri Jokiharju and Colin Miller, who was a healthy scratch Tuesday.

Bryson, perhaps because of his diminutive stature, hasn’t received as much attention as some other prospects in the organization. He was a fourth-round pick in 2017. He enjoyed a terrific rookie season with the Rochester Americans last year, registering four goals and 27 points in 61 AHL games. He scored all four of his goals and 16 points in the final 21 contests.

“I know that being a smaller guy, I have to be able to compete with those guys if I want to play in the NHL and any other league,” said Bryson, who recorded three assists in five AHL outings earlier this season. “So I’ve been kind of having that mindset going into things. I can knock guys off the puck. It’s a low center of gravity and I’ve been working on my strength over the past four or five years.

“So that’s what I look toward every summer is trying to get stronger. I know I can compete and I can knock these guys off the puck. I really think I stand a chance in those battles.”

Notes: The Sabres, who had a CBA-mandated day off Wednesday, have lost 12 of their 14 games since their COVID-19 pause ended. … Thursday is the first of eight meetings with the Penguins, the Sabres’ new East Division foe, this season. … Penguins superstar Sidney Crosby has recorded 21 goals and 63 points in 42 career games against the Sabres.