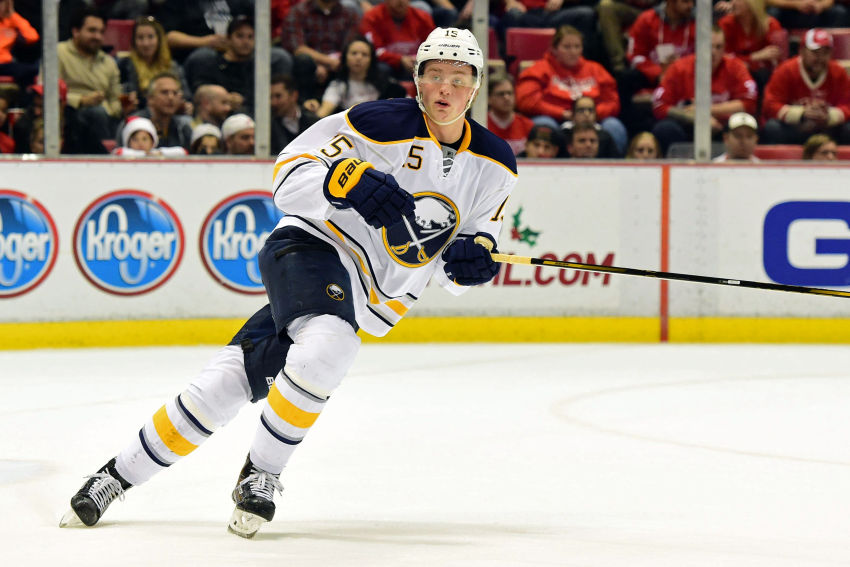 BUFFALO – Coach Dan Bylsma isn’t sure what sparked it. Perhaps it was Jack Eichel’s secondary assist on the first goal Saturday in Boston. Or maybe it was the slick center’s tying score late in the Sabres’ thrilling 6-3 comeback win against the Bruins, the rookie’s first NHL game in his hometown.

Whatever happened, for the first time in a while, Bylsma said, Eichel simply enjoyed playing and “not carrying the weight of having to score.”

By the end of the Sabres’ five-goal third-period, Eichel had a career-high two goals, four points and numerous memories that will last a lifetime.

“You saw him start to play with a lot more energy and a lot more excitement, and maybe he’ll leave some of that burden behind about needing and having to score,” Bylsma said Sunday after the Sabres prepared for tonight’s home game against the Washington Capitals inside the First Niagara Center.

Eichel, of course, derived some of that energy and excitement from playing before about 100 family and friends at the TD Garden.

“It was a pretty special moment for me, my family,” Eichel said. “It’s what I dreamed as a little kid, going back home where you’re from and playing against the team you grew up watching.”

Eichel assisted on Evander Kane’s second-period goal, tied the contest 11 minutes into the third period, sealed it with a long empty-netter and assisted on Ryan O’Reilly’s empty-netter.

The best part of the victory, Eichel said, was “just being able to celebrate that win with all the people that have supported me and been with me since I was young.”

In less than 45 minutes, Eichel compiled as many points as he had in the previous nine games. He hadn’t scored a goal in seven games, a season-long stretch.

“I had that little stretch of, I guess, frostbite,” Eichel said. “It’s nice to kind of break through and have a game you can build off of.”

Saturday’s effort could be a turning point in Eichel’s season. While the 19-year-old has generated excitement from the get-go, his first three months in the NHL have been up and down. The second overall pick has 11 goals and 20 points in 35 games.

But for the first time in his life, Eichel hasn’t consistently dominated the competition. The youngster has regularly tried to overcompensate by doing too much.

Right now, Eichel’s said he’s trying to learn how to relax a bit.

“It’s obviously a lot easier said than done,” he said. “It’s my first NHL season and … it’s important for me to realize this is an 82-game season. It’s long. You’re not going to be good every game. (I can’t be too) hard on myself because I think I’m my biggest critic and I put a lot of pressure and stress on myself.”

Slowly, Eichel is learning. He enjoyed two strong games before the Christmas break, registering an assist in both.

“The type of game I want to play is one with the puck on my stick and making plays and setting my linemates up and creating offense and playing that 200-foot game, starting in my own zone, playing north, using my speed,” Eichel said. “For a lot of the year … I wasn’t doing the things that had gotten me to this point, and I think I’m trying to get that confidence going again and know that I can make plays and do the things that have gotten me to this point.

“I think I’ve gotten back to that in the last few games, and that’s why I think I’ve been successful.”

To Bylsma, Eichel has started “using his speed and being hard to play against.”

“I think when he realizes how effective he can be with his speed, that’s when he’s been at his best,” Bylsma said. “He was at it (Saturday), especially in the third period.”

Before Saturday, Eichel used the five-day break to recharge at home.

“I think the biggest thing for me was taking a little mental break, getting back,” he said. “That was a game I had marked on my calendar. I had a lot of jump for it. It’s exciting to be able to feel good about yourself after that.”