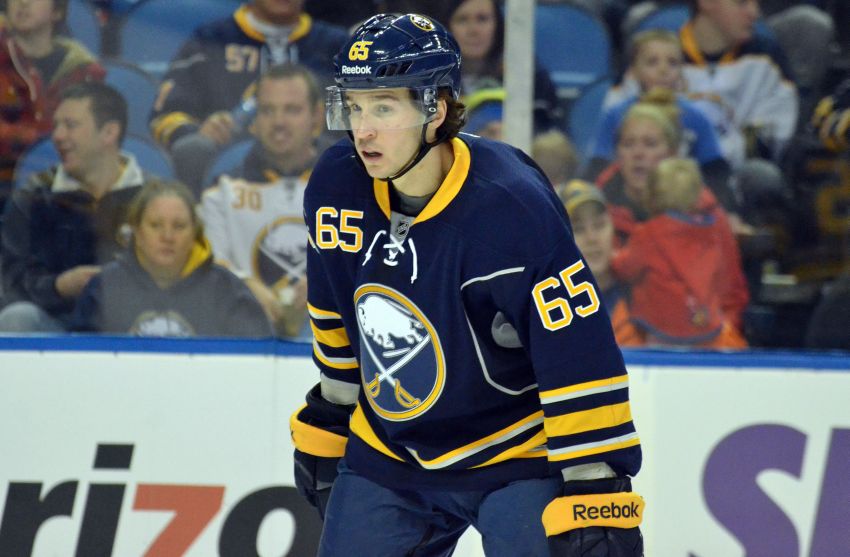 BUFFALO – In Brian Flynn’s mind, he “had no business getting drafted.” Getting bypassed during two consecutive NHL Entry Drafts was no slight.

“I wasn’t very good,” the 24-year-old Flynn acknowledged Saturday afternoon prior to making his NHL debut in the Sabres’ 4-3 shootout win over the New Jersey Devils inside the First Niagara Center. “I was undersized. But I think that helped me a lot. Ever since then I’ve gotten better every year.”

Flynn improved each season at Maine, upping either his goal or point total while morphing into a strong prospect. The 6-foot-1, 180-pound forward compiled 69 goals and 156 points in 153 NCAA games over four seasons.

“I kind of used that as a little chip on the shoulder, I guess,” Flynn said about going undrafted.

Clearly, Flynn impressed the Sabres, who awarded him a $1.025 million NHL base salary with his entry-level contract last year, a huge sum for a college free agent.

He began earning it Saturday, skating 8:50 on the right wing with Kevin Porter and Patrick Kaleta.

“I thought it was good,” interim Sabres coach Ron Rolston said about Flynn’s debut. “I’ll have to watch the video, and we’ll do a lot of teaching stuff. I’m sure there was a lot of anxiety and a lot of wanting to do well in his first game.

“I know he’s got a lot more. He’s a player that will get better and better as we go here. He adapts to situations very well and very quickly. I’m sure he’ll adapt to the speed, the pace and be a good hockey player for us.”

When Vanek missed Friday’s practice, Rolston called it a maintenance day and seemed confident the Austrian would play Saturday. Flynn’s recall from Rochester on Friday night raised some eyebrows.

Vanek was still sore Saturday morning. The injury bugs him “on and off” but he can “definitely manage” it, Rolston said.

With a team-high 16 goals and 32 points in 45 games, Flynn might be the Americans’ biggest surprise during his first full AHL season.

“He is a great kid, a lot of character, good speed, really smart hockey player,” said Rolston, who coached Flynn until his Feb. 20 promotion.

“I think I’m quick,” Flynn said. “I can use my speed, and hopefully I’ll be able to chip in a little secondary scoring.”

Having Rolston again could help his transition to the big leagues.

Flynn played five AHL games late in 2011-12 after the Black Bears’ season ended, not enough time to give him the opportunity he needed.

“We knew the potential he had,” Rolston said about this season. “Once he got there, we just wanted to fill him with confidence. We told him, ‘You’re playing with good players. We want you to go out there and play your game.’”

Flynn, who can play center or the wing, enjoyed some nice chemistry beside Porter earlier this season.

He has never even attended an NHL training camp. However, he scored a goal in Sabres’ scrimmage with the Amerks in January.

“I think playing in that scrimmage definitely helped out,” said Flynn, who wore No. 65.