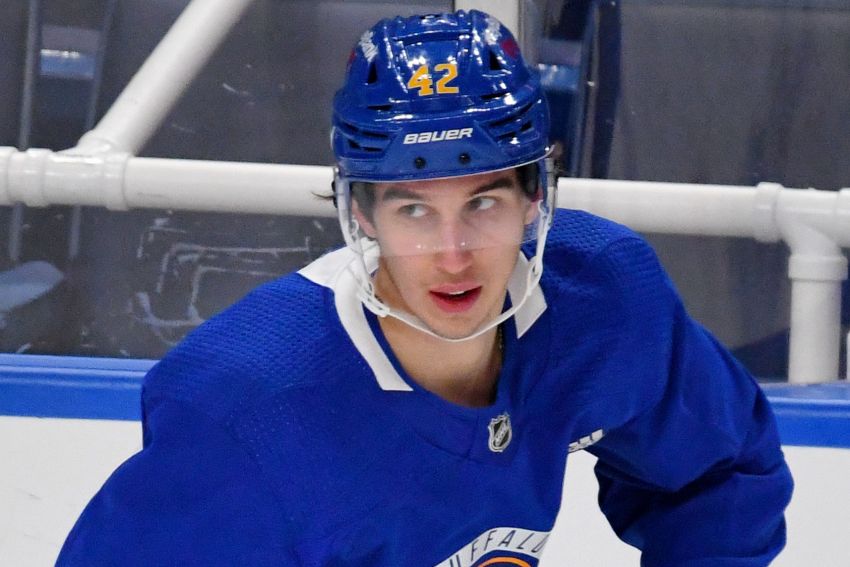 Over the past couple of games, Buffalo Sabres rookie Dylan Cozens said he has been battling the puck and unable to find any rhythm.

So when an opportunity materialized late in Tuesday’s 3-1 road loss to the New York Rangers to stick up for a teammate and fight Kevin Rooney after he boarded Drake Caggiula, Cozens pounced on it.

“The hit didn’t look too good and I wasn’t too happy with my own play these last couple of games and especially that game, so I felt I needed to get myself involved some way,” Cozens said on a Zoom call following Wednesday’s practice at Warrior Ice Arena in Boston.

Cozens, 20, wants to use fighting as a tool to ignite his game.

“After you drop the gloves, the adrenaline boost is something you can’t really get from anything else,” he said. “I do think after a fight it does give me a huge boost. It’s definitely something I think I’ll do when I’m not happy with my game and not happy with how I’m feeling.”

Cozens rarely fought before this season, scrapping just once in his junior career, according to hockeyfights.com. But the 6-foot-3, 188-pound center has already fought twice in 35 NHL games.

“They didn’t really want me to fight down there,” he said of his career with the Lethbridge Hurricanes. “I think I was too much of an asset to them. Up here, I know as a young guy it’s something that … it’s an easy way to gain respect and it’s just something I think I can do to help the team, especially when I’m not doing good.”

The Yukon native is only Sabre who has fought twice this season.

“I’ve been fine with anything he’s done with the emotion of the moment,” interim Sabres coach Don Granato said. “He’s a passionate guy. … He’s had a couple of fights. I thought both of them were inspiring to his teammates, to our team, and they were great. They were for good reason.”

While Cozens is a neophyte, he has handled himself well in his bouts.

“Just natural instinct, I guess,” Cozens said with a laugh. “I don’t really know how else to put it.”

The Sabres eased Luukkonen into the NHL by letting him watch the opening game of his first two series as a backup.

“He’s seen Boston, he’s comfortable,” Granato said. “You know I gave him that chance to see Boston initially and New York. I felt that was appropriate to do that, a way we could help him. He’s good to go now. I think he’s settled in. It’s great.”

With the Sabres trailing 2-1 Tuesday, winger Tage Thompson was penalized for cross-checking Brendan Smith 11:08 into the third period.

“I expressed to him that I did not like that penalty at all, and it contributed to us having less of an opportunity to come back in that game or at least tie that game,” Granato said. “There was no question that that was an impact.”

He added: “I’m very disappointed in what happened last night. He knows that.”

On Wednesday, instead of practicing in his usual spot at right wing beside center Casey Mittelstadt and Rasmus Asplund, Thompson skated on the fourth line beside center Riley Sheahan and Tobias Rieder.

“I’m not punishing Tage by putting him on a line with Riley Sheahan, I don’t believe that’s punishment, because Riley and that line did well last night and generated some real good scoring chances last night,” Granato said.

Rookie Arttu Ruotsalainen replaced Thompson beside Mittelstadt, according to The Buffalo News. Caggiula, meanwhile, skated beside Cozens and Anders Bjork.