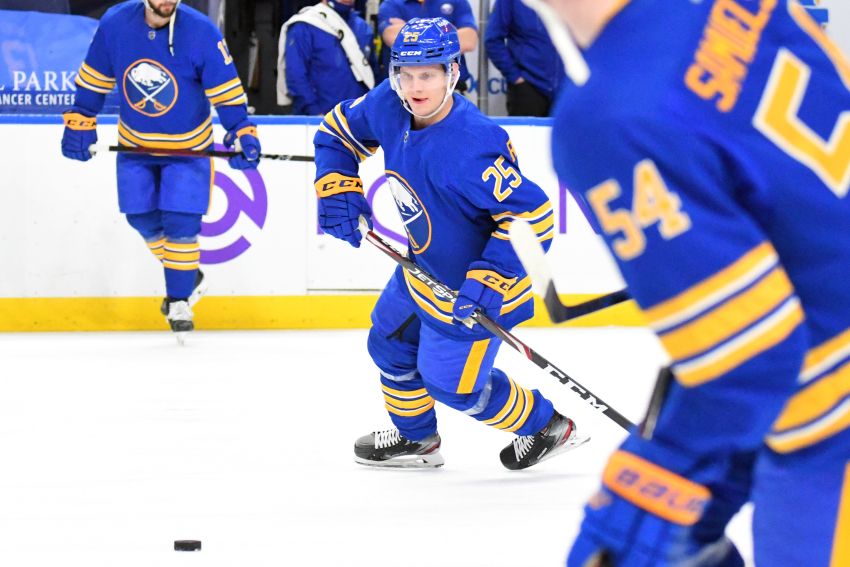 When Don Granato arrived in Buffalo as an assistant in 2019, the idea of someday coaching a relatively unknown Sabres prospect named Arttu Ruotsalainen intrigued him.

Granato, now Buffalo’s interim coach, only watched Ruotsalainen, 23, up close for a few weeks in training camp. The Finn’s contract stipulated he had to return to Ilves, his Liiga team, if he did not make the Sabres last season.

“Being familiar with young players and the growth rate development, I was really excited with him,” Granato said on a Zoom call prior to Sunday’s 6-3 road loss to the New York Rangers. “He’s … ultra-competitive and he has enough hockey sense.”

Those assets have helped Ruotsalainen, who was recalled for the first time three weeks ago, quickly acclimate to North American hockey.

After a 13-game stint with the Rochester Americans, Ruotsalainen has enjoyed regular NHL duty, scoring four goals in his first 10 outings entering tonight’s contest against the Rangers at Madison Square Garden.

Ruotsalainen’s “base of competitiveness,” as Granato called it, and six years of European pro experience make him an interesting young asset.

“He’s strong on pucks even though he’s small, he’s hard on pucks and his second effort on a puck, if you beat him with strength, you usually don’t knock him off his edges and he hits you with quickness,” Granato said. “Half a second later, he’ll steal the puck back or make a play on you.”

Ruotsalainen said he has learned “there is much more space than you think” on the smaller North American ice surface.

When Ruotsalainen left Ilves in December to attend Buffalo’s training camp, he had scored a league-high 16 goals in only 19 games. The rookie compiled five goals and 13 points during his two-month run in the AHL.

“He has a knack for scoring,” Granato said.

So far, Ruotsalainen’s goal-scoring prowess has carried over to the NHL.

In Friday’s 6-4 win over the Boston Bruins, Ruotsalainen, who possesses a lethal shot, beat goalie Tuukka Rask on the glove side from high in the slot.

“He put it to a spot that Tuukka Rask absolutely had to make a save,” Granato said. “Great goalies put themselves in spots where pucks can hit them. Great shooters make the goalie have to move and make the save. That’s what Arty has a real good knack for. He makes the goalies make saves. They’ve got to adjust to him and his shot and he’s shown that.”

Ruotsalainen has also shown his versatility. While he has played center throughout his career, he has mostly skated as a winger this year. He recently moved to the right side beside rookie center Dylan Cozens and newcomer Anders Bjork.

“It doesn’t matter, really,” Ruotsalainen said of his position preference. “I like to play both. I think it’s a good thing for me that I’m able to play both center and wing. I don’t know, it’s been a new thing for me in this season but I like it so far.”

Victor Olofsson’s ability to score from the circle during power plays – his release ranks among the NHL’s quickest – means opponents often key on him.

“I feel like a lot of teams are putting one guy kind of close to me and I don’t get as many one-timers from my usual spot, so I’ve got to find some other looks,” Olofsson said.

On Sunday, for example, Olofsson scored a power-play goal from high in the slot.

“It was kind of a broken play and their guy lost his stick, which opened up a lot of ice in the middle,” he said. “Definitely I’m trying to find some other looks other than just that circle for the one-timer.”

Granato said the Sabres have stressed “more movement and flow and interchange” on the man advantage.

“It’s a challenge on the power play when you just go right to your position and you go to set up before you break pressure, before you pull the penalty kill back into their position,” he said. “So we’ve encouraged and we will encourage, set up where you’re at. Read a play, react to the play. We’re trying to move toward that direction as opposed to guys just moving robotically to their setup. Read the play that’s in front of you.”

How much has Sabres defenseman Rasmus Dahlin, 21, improved this month?

Dahlin has registered three goals, 11 points and an even rating in the last 13 games.

The Swede compiled two goals, 12 points and a ghastly, league-worst minus-34 rating in the first 36 games this season.

Notes: Sabres goalie Ukko-Pekka Luukkonen is expected to make his second NHL start tonight. … The Sabres had Monday off. … The Sabres’ season finale May 8 against the Pittsburgh Penguins has been moved from 7 p.m. to 3 p.m. … On Sunday, winger Tobias Rieder was whistled for his first penalty, a hooking call, in his 41st game this season.