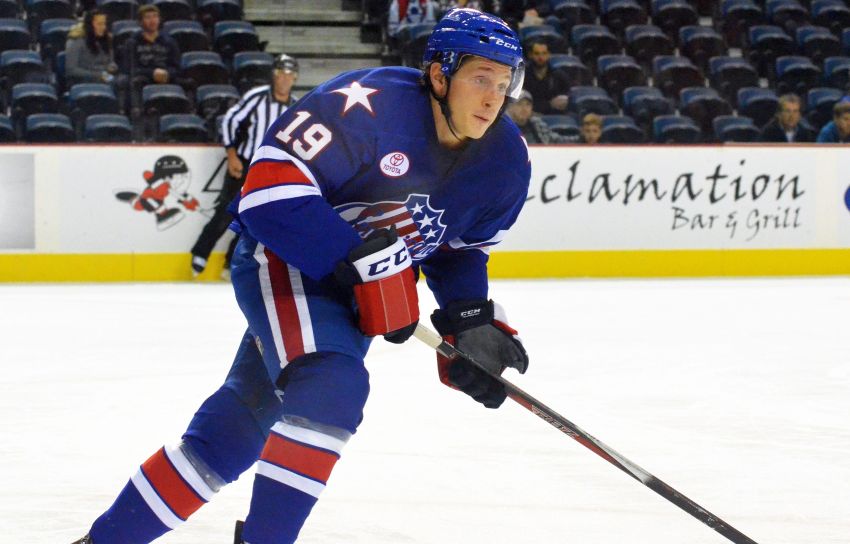 BUFFALO – Luke Adam figured he had fallen out of the Sabres’ plans. The 23-year-old winger, a strong Calder Trophy candidate two years ago at this time, barely received a look during the exhibition season.

The struggling, goal-starved team then refused to summon Adam from Rochester as he began piling up scores and recapturing his old form.

“I think they kind of had their mind made up,” Adam said Wednesday inside the First Niagara Center after the Sabres recalled him and defenseman Brayden McNabb.

But the Sabres’ recent housecleaning has given Adam, who has an AHL-high 13 goals in 15 games, another chance.

The new duo wants to “keep guys up here on their toes,” Nolan said.

“There’s always someone coming back door,” Nolan said. “You never know where they’re going to come from.”

Both players will dress tonight in Philadelphia against the Flyers, Nolan said.

Adam earned a brief four-game recall in April, his first stint in 14 months. McNabb hasn’t played an NHL game since April 7, 2012, the 25th of his strong rookie campaign.

But the Sabres didn’t even summon McNabb for their abbreviated training camp when the lockout ended in January. Then the 22-year-old, who struggled a bit last season, suffered a season-ending knee injury.

“I took it hard,” McNabb said about staying in the minors so long. “I wanted to be here this year from the get-go. It takes a little adversity. I had some last year, so you learn a lot from that kind of thing.”

McNabb has two goals and 12 points in 15 games this season.

Adam, who had only 15 goals in 67 AHL games last season, has spoken honestly about his struggles. Forgetting about the Sabres and worrying about himself and the Americans has helped him reach the NHL again.

“I don’t think there was any doubt in my mind that I could get back to the NHL and I was an NHL player,” Adam said. “So it was just maturing in certain situations and becoming that player where I kind of understand what it takes to play in this league.

“It just doesn’t come. You don’t wake up in the morning and know what to do and know how to compete and know how to get to this level. … I don’t think I ever stopped believing in myself.”

Adam practiced with Steve Ott, who moved to center, and Zemgus Girgensons on Wednesday. McNabb had multiple partners.

Brian Flynn could be scratched tonight. The winger skated as a spare on the fourth line at times.

Long-term, Nolan said, the Sabres project Girgensons as a winger. So despite three impressive games at center, the 19-year-old Latvian switched back to the side Wednesday.

Nolan, who coached the rookie with the Latvian national team, said he “looked really good to me” at center.

“He’s going to look as good to me at the wing as he does at center ice,” Nolan said. “We have to figure out how we’re going to best utilize his skills and his skill set, a nice, powerful winger like him. He’s only 19 years old. He turns into 22, 23, he’s going to be a man in that position. He can be a very powerful power forward for us.”