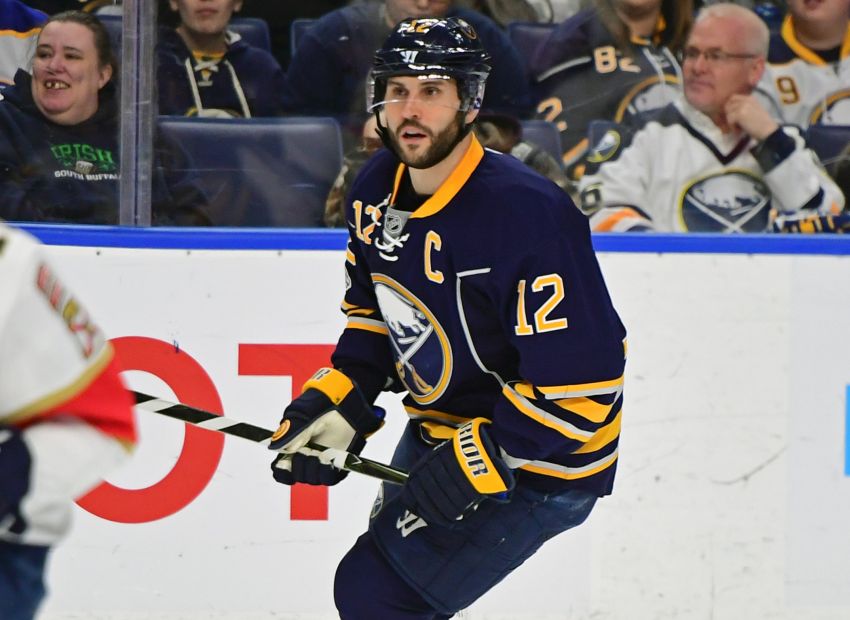 BUFFALO – In the days leading to Brian Gionta’s 1,000th NHL game, the Sabres were a little nervous, even “walking on eggshells,” coach Dan Bylsma said.

No one wanted to talk about their captain’s milestone.

“Didn’t want to jinx it, so to speak,” Bylsma said after Gionta fittingly scored the winning goal in Monday’s 4-2 win against the Florida Panthers.

But the Sabres loosened up, and following an emotional pregame ceremony honoring Gionta’s achievement, they played a terrific game, winning for the fourth time in five tries.

In a season filled with more losing, Monday was a rare night the Sabres could celebrate.

“It was an emotional night,” Gionta said. “(It was) a great thing the organization did and my teammates being a part of it was pretty special. Seeing my family out there was pretty emotional. I’m just happy to get through it and have them share in the moment.”

Bylsma added: “You saw our guys play with that respect for him.”

The highlight, of course, was Gionta’s power-play goal 1:25 into the second period, his 289th in the NHL and 52nd winner.

“Half our benched jumped up like it was a playoff goal,” Bylsma said. “I think everyone was pleased to see him get the reward and in a fitting way.”

Some luck helped Gionta score his 15th goal this season. The diminutive 38-year-old winger cut across the crease and appeared to wait too long to shoot. But he banked the puck off Panthers defenseman Jason Demers, and it deflected past goalie James Reimer.

Bylsma said it was “kind of a goal scorer’s goal around the net.”

“I didn’t know at first whether it went off him or the D, just a lucky bounce, I guess, on this night,” Gionta said. “I had a couple shots early and (was) a little jittery those first couple of shifts but settled in a little bit.”

After the game, Sabres defenseman Josh Gorges, Gionta’s close friend and teammate for eight years dating back to their days with the Montreal Canadiens, still seemed emotional.

“To be able to be out there with him, it’s a great honor for him, but it’s a proud moment for me being a teammate, a friend,” Gorges said. “To be able to witness the emotion of his family, it was a great night, and then to top it off, the goal he ends up scoring, it’s the game winner.”

Gorges presented Gionta a painting during the ceremony with teammates Kyle Okposo and Ryan O’Reilly.

“I’m a guy that likes to stay behind the scenes, I don’t like to be out in front of it,” Gionta said. “So for tonight to be the focus early on for the ceremony and whatnot, I’m just a humble kid from Western New York and I just try to take it all in.”

In the happy Buffalo dressing room before the team departed for tonight’s road tilt in Columbus, players were sporting Gionta jersey shirts with a caricature of him.

“That’s pretty cool,” Gionta said. “They said it was kind of a life-size picture of me in the front. (For) the guys to be a part of it and do what they did, it’s just pretty special.”

What has been the theme of the two games?

“When you want to break it down, guys kept their shifts short, we were able get the intensity, the pace up,” Gorges said.

Bylsma added: “We come out with a lot of energy, come out on the forecheck, come out in the offensive zone.”

O’Reilly’s power-play goal opened the scoring 3:21 into the game. Zach Bogosian followed at 14:06.

Following Gionta’s score, Jonathan Marchessault’s power-play goal 10:19 into the second period got the Panthers back in it. But Marcus Foligno scored at 15:08, putting Reimer on the bench. Jonathan Huberdeau scored before the period ended.

The Sabres had a fifth goal called back late in the second period. After watching replays, officials ruled Zemgus Girgensons, whose foot hit the puck because Nick Bjugstad hauled him down, kicked the puck in.

Early in the third period, Sabres goalie Robin Lehner stopped Reilly Smith’s penalty shot after he zoomed in. Lehner, who has struggled mightily in shootouts this season, played the shooter aggressively.

“I tried to play it a little bit as a breakaway,” Lehner said. “He came with a lot of speed, too. It’s a little bit easier for me.”