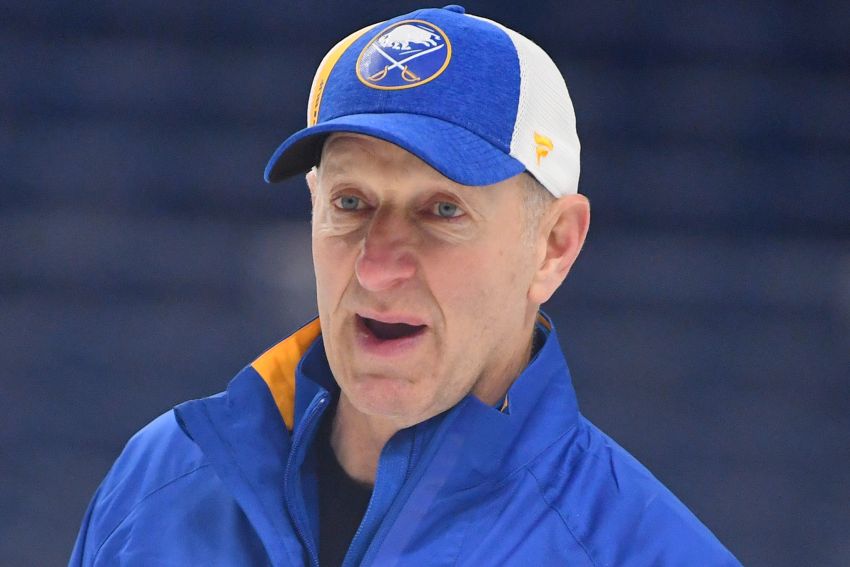 BUFFALO – Following an eight-day break, the Sabres practiced this afternoon without coach Ralph Krueger, who tested positive for COVID-19 last week, and the nine players who are on the NHL’s protocol-related absences list.

Some quick updates from Sabres general manager Kevyn Adams, who spoke on Zoom before the session inside KeyBank Center:

“I feel very comfortable that he’s being looked at from our doctors and trainers,” Adams said.

Assistant coach Steve Smith led today’s practice. Adams wouldn’t speculate on how the coaching staff might look if Krueger is unavailable later on.

– Adams said some players are symptomatic, others are asymptomatic.

Adams said some staff members are in protocol.

– Adams said he spoke to NHL deputy commissioner Bill Daly before the Sabres played the New Jersey Devils on Jan. 30.

The Devils had players on the absences list when the two-game series started and had six on it by the second game Jan. 31. Neither team has played since that day.

Right now, the Devils have a stunning 19 players on the list.

“I did have a conversation on Saturday before the game with Bill Daly and asked him questions around exactly where the situation was with New Jersey and where we were at and based on the information that he was given, the (game was) decided to be played,” Adams said.

He added: “From the information that was at that point presented Saturday, the comfort was that we should move forward and play the game. On Sunday, I can’t really say from my standpoint – I didn’t really have any information, nothing had changed that I was aware of.”

– Adams wouldn’t speculate on the possibility of in-game transmission.

“As soon as that information is shared, I’m sure it will come back to the organization. I will say the communication has been excellent with the National Hockey League. I’m on daily calls with Bill Daly, constant communication.”

– Adams said he’s “really proud” of how the team’s players and staff have followed COVID-19 protocols since the season began.

“Certainly our staff’s gone way above and beyond putting every measure in place that we can to protect our players,” he said.