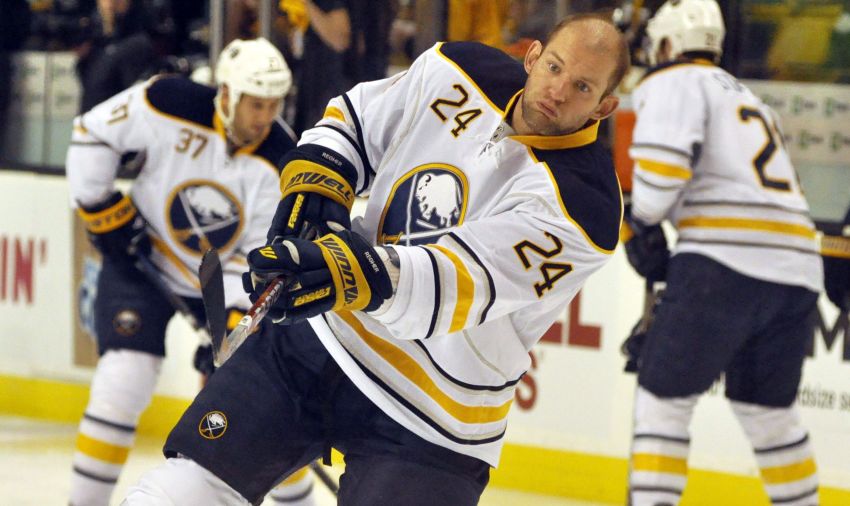 AMHERST – On Thursday in Toronto, the NHL Players’ Association submitted three counter proposals it believed could help end a lockout now in its 35th day. The union claimed each hit the 50-50 hockey-related revenue split the NHL has demanded, a possible breakthrough in the contentious negotiations.

The NHL examined the offers for 10 minutes, and then rejected them. The sides spoke for a few more minutes before departing.

Any cautious optimism ignited by the league’s offer on Tuesday has been extinguished.

On Friday, Buffalo Sabres defenseman Robyn Regehr, who was in the negotiating room, seemed a bit stunned the collective bargaining agreement talks fell apart so quickly, saying, “We thought we could really create some good traction.”

“Here we are talking about the framework of the new collective bargaining agreement. This is the main part of it,” Regehr said Friday, hours before the NHL called off games through Nov. 1, the second round of lockout cancellations. “To not have a dialogue about it is really quite disappointing at this time. I think it kind of reaffirms what a lot of players had thought about the last proposal, that it was more of a well-timed PR move.”

Speaking on behalf of the eight other players skating inside the Northtown Center, Regehr acknowledged Thursday’s disappointment has sapped some optimism from him.

“(The NHL’s offer) not only asks for concessions in that revenue split, but pretty much everything in the details of that contract is concessions by the players,” he said. “There really is nothing in there that’s positive in there for us. We’re in the same situation that we’ve been in here for a while it looks like.”

More lost games won’t breed hope, although the NHL didn’t “go big” Friday with a month of cancellations as some outlets had recently reported it would.

Four more Sabres games – Oct. 26 in New Jersey, a First Niagara Center tilt Oct. 28 against Philadelphia, Oct. 30 in Boston and a home contest Nov. 1 versus Phoenix – are gone, bringing the total to nine. The NHL canceled the first two weeks of the season on Oct. 4.

Since NHL commissioner Gary Bettman has said an 82-game slate would need to start Nov. 2, there is still the ever-so-small possibility a full season could be played.

Don’t expect players to crack anytime soon, however, Regehr said. They want to get this CBA right.

“For us as players, we’re willing to go through some short-term pain here to get the right deal, for not only the players now and some of the teams that have been affected that Gary continues to talk about in the negotiations, but we want to fix all problems,” Regehr said. “And we also want to put the players that are coming into the league in a decent situation and not give them the short end of the stick.”

Regehr said he’s willing to miss a second full season. The 32-year-old also endured the 2004-05 lockout, which wiped out the entire campaign.

He also said: “Everyone’s losing at this point, especially the players because of the short length of careers. So it’s very tough to make (it) back down the road. But when you look at the current NHL proposal, the concessions … are absolutely massive, and it’s every single group of players.

“I think what (the NHL’s rejection) did was galvanize players in saying they want to take from absolutely everyone and don’t want to negotiate in a back-and-forth type way.”