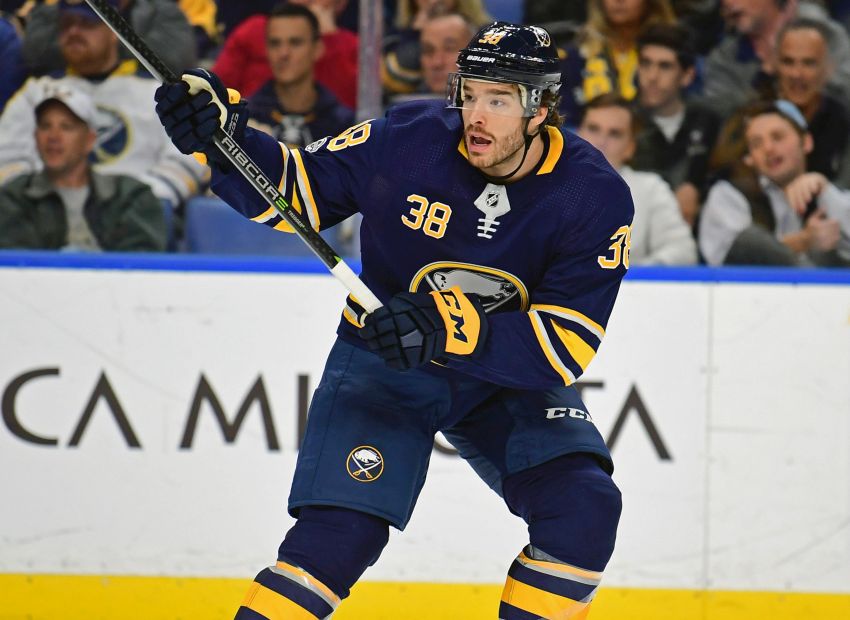 Zach Redmond has shuttled between the NHL and AHL for years. ©2017, Hickling Images, Olean Times Herald

BUFFALO – For four seasons, Sabres defenseman Zach Redmond shuttled between the St. John’s IceCaps and the NHL, first as a Winnipeg Jets prospect and later as a Montreal Canadiens depth veteran.

When the NHL called, Redmond, 29, couldn’t simply drive an hour or so down the thruway. Winnipeg, for example, is about 3,000 miles away. Redmond had limited flights to chose from and sometimes a five- or six-hour travel time from Newfoundland.

Redmond believes getting recalled from there is like “preparing to move.”

“I could see why they’re locating all the minor league teams to make it more convenient,” Redmond said this morning after the Sabres prepared for tonight’s tilt against the Washington Capitals inside KeyBank Center.

When the Sabres informed Redmond on Monday afternoon they needed him, he stayed in Rochester for a bit.

“Every up and down situation is different,” he said. “This one, I guess, is as convenient as it gets. I just drove an hour. I was able to slowly pack and kind of eat dinner. I didn’t have to catch a flight or anything. Really no big deal this time around.”

Redmond, a veteran of 132 NHL games and 197 AHL contests, appreciates the easy travel. If the Michigan native needs something, he can drive back and get it after practice.

“There, it was like you’re loading up a hockey bag, you don’t know when you’re going to be back,” he said.

When informed Redmond said he’s playing, Housley replied, “He said he’s in? That’s great. I like his attitude. He’s ready to go.”

Tennyson skated with his teammates this morning.

Update: Tennyson is officially out.

Injuries have ravaged Buffalo’s blue line. The Sabres have already used 10 defensemen this season. Zach Bogosian, who was expected to be a major contributor under Housley, has been sidelined all season with a lower-body injury.

Why haven’t they summoned top defense prospect Brendan Guhle? The pro rookie, 20, has two goals and eight points with the AHL Americans. He played three NHL games last season, acquitting himself well in one tilt against the Capitals.

Housley said Guhle was “not at all” under consideration for a recall. Sabres general manager Jason Botterill, he said, picks players to come up.

“(Guhle’s) doing a great job developing where he is right now,” Housley said. “It’s fair to say we don’t want to rush him. He’s in a good spot, he’s playing well, he’s getting minutes right now that I think is going to help carry his game and develop him.”

He added: “It’s OK. The American League is a pretty good hockey league, and it’s a good place to develop.”

The Sabres will make one lineup change up front, inserting Nick Baptiste for Matt Moulson. Baptiste has been skating at right wing beside center Sam Reinhart and Seth Griffith.